Defunding Abortion - more popular than any political party in Ontario?

No, the title is not a joke.

Eliminating taxpayer funding for abortions that are not medically necessary is a political position that’s more popular amongst Ontarians than is the Liberal Party, the NDP or Tim Hudak’s PCs.   So says a recent AngusReid opinion poll.

AngusReid released its latest abortion opinion poll results on January 28, 2013, timed to coincide with the 25th “anniversary” of the Morgentaler ruling which threw out Canada’s previous abortion law.

When the poll results were released, mainstream media headlines focused almost exclusively on the topic of whether Canadians want to “reopen the abortion debate”. That particular question found that 59% of Canadians “think there is no point in re-opening a debate about abortion in Canada right now”. I think that high figure is unreliable for a number of reasons which I won’t get into for the purposes of this blog.

Instead, I want to focus on a finding in the survey that was virtually ignored by the media, i.e. high public support for eliminating taxpayer funding of abortion, in every province.  Due to the upcoming Defund Abortion Rally in Ontario,  this article will focus there.

Overall, that means 51% of Ontarians oppose the status quo of forcing taxpayers to finance all abortions, for any reason. See chart below. 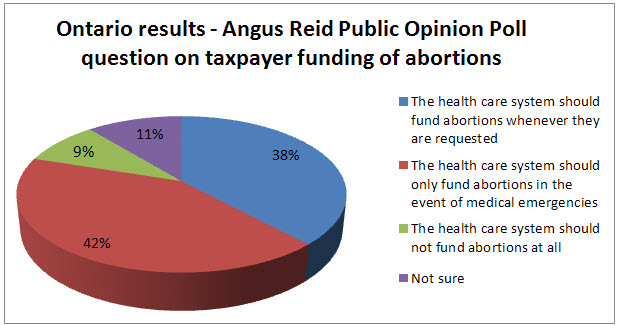 Wow! How did the media miss sharing that little gem with us? It’s quite a significant finding that more than half of Ontarians feel taxpayer should not be forced to pay for abortions that are not medically necessary. 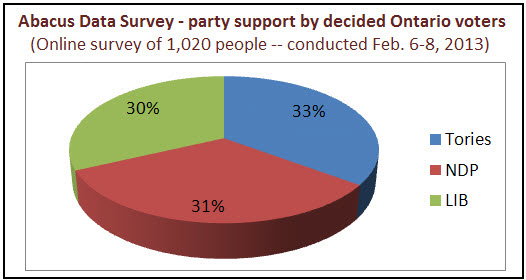 It seems to me that the position of defunding elective abortions is more popular than Hudak, Horwath or Premier Wynne! That’s something political leaders currently choose to ignore, although with the right approach, and a certain amount of oratory skill, this could be a tremendously winning issue.

On Tuesday March 19, an event will take place that I believe is going to help raise that 51% figure even higher.  A major Defund Abortion Rally has been organized at Queens Park, between 12 noon to 2pm, by Campaign Life Coalition’s Youth division.

Taxpayers will rally outside the legislature to demand that MPPs remove abortion from the list of services covered by OHIP.  It’s my sincere belief that this rally, and CLCY’s ongoing Defund Abortion campaign, will help move the percentage of Ontarians  who oppose taxpayer funding of elective abortions to a level that politicians won’t be able to ignore.

When the people lead, politicians must eventually follow. If you live in Ontario, please help us make the politicians take note.  Come to the rally yourself!

Comments
By: Ainsley Valladares
March 15, 2013 @ 6:07pm
I am against the funding of abortions with tax payers hard earned dollars.
Period.
By: Darlene Walsh
March 15, 2013 @ 6:45pm
I feel so strongly about NOT having my tax dollars go to funding abortions in any case that I will be personally handing this to my MP and MPP. Suggest everyone else do the same.
By: Peter Emmerson
March 16, 2013 @ 8:44am
I am against any tax dollars going towards abortion.
By: Margaret Smith
March 17, 2013 @ 3:56pm
I do not, nor have I ever given permission for my tax dollars to be used to fund abortions!Please stop this disservice to our future Canadians by defunding abortion right now!
By: Joy E
March 17, 2013 @ 5:08pm
Abortion is something I absolutely disagree with, and I should never be put in a position to fund someone else deciding to terminate their child's life. You decided to have sex, then you deal with the consequences yourself.
By: Brent M
December 1, 2013 @ 8:15am
I am also against any of my tax dollars going towards the military, or any person anywhere being killed in my name by my country. Can we as campaign life set up a similar petition to advocate for the freedom to redirect our tax dollars away from military campaigns?
By: Camapaign Life Coalition
December 2, 2013 @ 6:00am
Hi Brent. We appreciate your concern about military conflict sometimes costing lives. However, there is a fundamental difference between military action either in self-defence or to protect innocents in other countries against an oppressive regime that denies basic human rights or which kills innocent people.

Although sometimes there are unintended, innocent casualties of war, they are not the targets of such military campaigns, let's say by the Canadian or U.S. military.

However, with abortion an innocent person is always the target of violence. The kill target in abortion is not some violent oppressive regime, but rather, an innocent baby in the womb.

This is why abortion is always intrinsically evil, but military action is not always so. For that reason, at least at this point in Canadian history, one would not appear to be justified in withholding taxes from defense spending.