The voting public has therefore given Premier Ford a huge and very clear mandate to implement his campaign promises. That includes repealing Kathleen Wynne’s radical sex curriculum - one of his key pledges.

During the leadership race, Mr. Ford told Campaign Life Coalition that he would make repealing and replacing the Wynne/Levin sex program “an early priority” in his administration.

The day after his victory, at his first press conference, Ford promised again that he would repeal the pedophile-influenced sex ed curriculum as soon as possible.

He was asked if that would happen by the start of the new school year, but didn’t give a clear answer, saying he’d have to discuss with his incoming Education Minister to see what’s possible.

Please join Campaign Life Coalition in asking Doug Ford to repeal the sex curriculum no later than the first day of school on Tuesday September 4th.

Campaign Life Coalition has launched a petition that we'll hand-deliver to Premier-designate Ford, calling on him to fulfill his winning campaign promise by the time our precious children start their first day of school.

No more reckless indoctrination in the classroom. 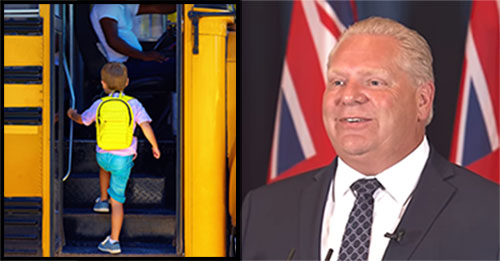