Last November 2018, the Ontario PC Party held a convention to elect a new party executive (including a new party president) and consider a range of policy proposals and constitutional amendments.

Heading into the convention, Campaign Life Coalition endorsed individuals running for six positions on the Ontario PC Party executive, including for the positions of President (Jim Karahalios) and 1st Vice President (Hayden Faus). 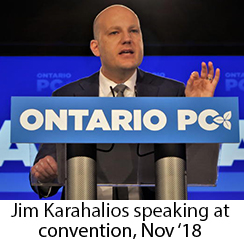 We also helped to pass three parental rights policy resolutions, a conscience rights policy to protect medical practitioners, plus other socially-conservative policies. Finally, we supported 12 proposed constitutional amendments that would have helped level the playing field for pro-life and pro-family PC members who have been treated unfairly for too long.

CLC encouraged many of you to be elected as PC delegates and to spend hundreds of dollars to attend convention. We have a moral obligation to report to you the troubling results of unethical and fraudulent voting practices that have since been uncovered. As a result, attendees of the PC convention were defrauded of their right to cast a vote in a process that was free, fair, and democratic.

At convention, CLC was very confident in the chances of success for our Executive candidates (especially for President) and the constitutional amendments we endorsed. We were surprised when party officials announced only three of the six CLC endorsed candidates were successful. We also found it odd that the voting results from the executive election were not provided by the party.

Now we know why.

Since convention, Jim Karahalios’ lawyer conducted an investigation in order to document the details of the voter fraud that occurred.

Karahalios’ lawyer has uncovered information from witness statements that shows staff from Ontario PC Party headquarters and staff from Premier Doug Ford’s office, orchestrated, promoted, and permitted, significant voting irregularities and fraud to occur in order to stop the candidates that CLC endorsed in favour of the candidates that Doug Ford and his staff cut a deal in order to support.

What the above numbers indicate is that Karahalios received more than 60% of the vote for Party President, to Brian Patterson’s less than 40%. And yet, Patterson was declared the winner.

Karahalios’s investigation has also revealed how the staff was able to pull this off.

This resulted in 100 more votes being cast during the constitutional plenary as compared to the policy plenary that was held the day before. These extra ineligible voters were the reason why 9 of the 12 constitutional amendments CLC endorsed failed to achieve the necessary 66% required to pass even though they achieved over 50% support.

Karahalios has posted a survey for those PC Party of Ontario members interested to share their opinion on his investigation. If you are a PC Ontario member, or were a delegate at the 2018 convention, we encourage you to review the full details of his investigation and complete his survey by visiting www.jimkarahalios.ca/survey.

Supporting Karahalios and his campaign for justice

The reason why CLC is supporting Karahalios’ effort to expose and correct the injustice that occurred during the election for Party President is near and dear to CLC’s regular pro-life, pro-family work. We recognize that if the party gets away with cheating on the Executive Elections, it will be emboldened to cheat on candidate nomination votes, whenever it wants.

For instance, if a pro-life or pro-family MPP has been too outspoken on our issues for Ford’s liking, why not cheat with fake ballots and illegal votes in that person’s next nomination challenge before the next election? The Party or the Premier’s office can simply eliminate that voice by rigging the nomination vote and replacing him/her with someone of the establishment’s choosing.

In another realistic scenario that we fear could result from the PC establishment getting away with cheating on the Party President vote, is that they might decide they can also get away with not allowing any more “trouble-making” social conservatives to become candidates. Why not, if they can just rig the nomination contest to ensure outspoken pro-life and pro-family nomination candidates never win?

This is an existential threat to CLC’s political work and goal of electing a pro-life, pro-family majority to Queen's Park

We must do all we can to help Karahalios clean out corruption in the PC Party. You will hear more about this in the near future - stay tuned.