Good news! On the evening of Friday May 29th, the WCDSB announced that it was cancelling its shocking plan to celebrate Gay Pride Month with a “Catholic version” gay pride flag!

In a press release, the Board announced that its decision came about due to backlash from all sides, obviously those opposed to the board’s anti-Christian witness as well as the LGBTQ lobby which continued to demand the official gay pride flag, rather than a more subtle “Catholic version”.

We thank all the CLC supporters who took our urgent call to action about the board’s anti-Christian witness. Those of you who signed our petition to Bishop Douglas Crosby, who phoned and emailed his office, may well have had an impact on the WCDSB’s decision a few hours later. CLC also tweeted our petition to the WCDSB Director of Education, Loretta Notten, to show the board that more than 3,000 people were strongly opposed to the decision.

However, the danger is far from over. The WCDSB press release said that it will be consulting with “the LGBTQ community” about its plan for Gay Pride Month in June 2021. From the press release:

Out of sincere respect for all viewpoints shared, the school board will not fly any flag during Pride month.

The proposed flag will be displayed in school foyers throughout the 2020-21 school year, as the school board consults with the LGBTQ community on next steps leading to Pride Month 2021. (emphasis added)

We can assure you that the only outcome that would result after consulting with the “LGBTQ community” is a decision to give full-throated support to Homosexual Pride, flying the official gay pride flag, and more. Stay tuned for another call-to-action about this issue from CLC.

****ORIGINAL MESSAGE SENT BY EMAIL TO SUPPORTERS ON FRIDAY MAY 29TH****

We are truly living in dark times. It seems that up is down, down is up, wrong is right, sin is virtue and the people charged with defending and advancing Christian doctrine in our schools are actually working hard to destroy it.

The Waterloo Catholic District School Board (WCDSB) in Ontario, a part of the Catholic Diocese of Hamilton, has announced that it will celebrate Gay Pride Month throughout June.

It will do so with a so-called "Catholic version" of a gay pride flag which features rainbow-coloured people in front of Jesus, as pictured below. 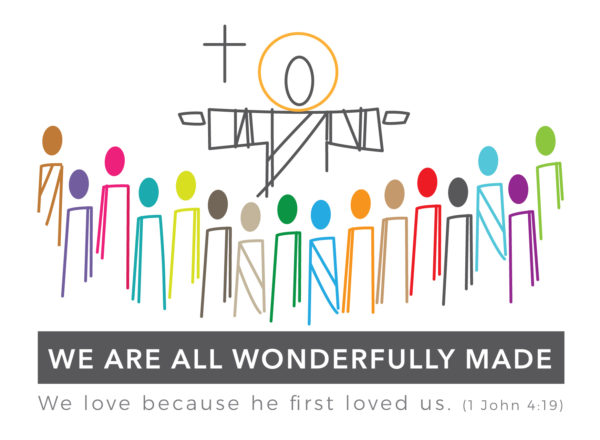 A modified reference to Sacred Scripture contained in the flag, "We are all wonderfully made", reinforces and endorses one of the main lies of LGBT activists, which is that "gay people are born that way".

This lie is arguably the most powerful weapon used by the LGBT activists to normalize homosexuality in the minds of the public.

This is a sacrilege and an obscene scandal.

Every elementary and high school in the WCDSB will be asked to fly this modified Gay Pride flag as a means to "mark Pride Month".

This of course sends the scandalous and erroneous message to every student, teacher, staff member and family, that Church teaching has changed, and that the school board, the diocesan Bishop and the Church, now believe that homosexual acts, homosexual marriage, etc., are perfectly natural, moral, worthy of praise by Christians and should no longer be considered sinful.

Most importantly, this represents serious spiritual harm to Catholic children in Waterloo Region and throughout Canada, who will now be subtly - or in many cases, overtly - taught to reject Biblical prohibitions and perennial Christian teaching against homosexual acts.

According to the Code of Canon Law, the local Bishop of any given diocese is responsible for ensuring that his Catholic schools are authentically Catholic.  With this scandalous decision, the WCDSB has now placed itself outside the moral boundaries of the Catholic Church, and can no longer be truly recognized as Catholic or Christian.

Therefore, it is the responsibility of His Excellency, Bishop Douglas Crosby, to correct this wayward school board, demand that they renounce their support of Gay Pride Month, and halt their plans to fly the sacrilegious, "Catholic version" of the Gay Pride flag. 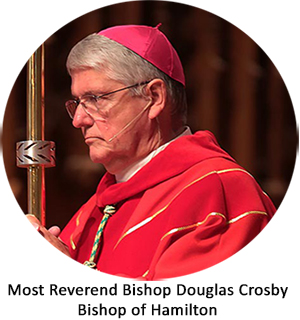 If the Board refuses to obey, then Bishop Crosby must immediately forbid the board from using the name "Catholic", which is his legal right.

To phone the Bishop's office to respectfully express your disagreement and urge him to take action: (905) 528-7988 x. 2222. To send His Excellency an email: [email protected]