Campaign Life Coalition is pleased to share with you our Voter's Guide to the New Brunswick provincial election.

There are only five candidates we have deemed to be "Supportable" by pro-life voters, based on their public statements or actions.

All of them are Progressive Conservatives. Unfortunately, all other candidates in the remaining ridings either did not respond to CLC's questionnaire, or have a record or policy position that is not pro-life or pro-family. 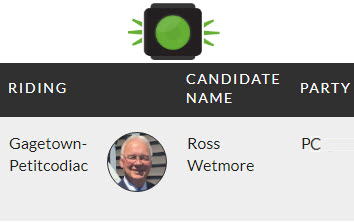 To see how Campaign Life Coalition has rated candidates in the remaining 44 ridings not listed above, click here to search by riding name, or here to find your local riding by postal code. 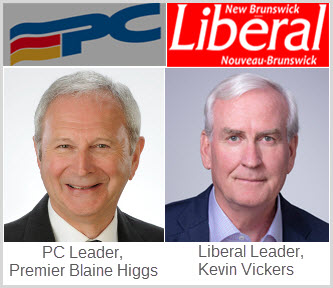 We will look only at the two main provincial parties - the governing Progressive Conservatives under Premier Blaine Higgs and the Opposition Liberals under Kevin Vickers.

While in opposition, Blaine Higgs was outspoken in his pro-life views. Higgs attended the March For Life and publicly said that he shares the values and aspirations of the marchers.

In addition, he led a fight to stop the then-Liberal government of Brian Gallant from overturning the "two-doctor rule", which, at the time, required a sign-off by two doctors prior to an abortion being considered medically necessary, and therefore eligible for taxpayer funding - a bare modicum of protection for the preborn that still existed at the time.

Higgs even demanded a free vote on the Liberal plan to expand the number of abortions in New Brunswick.

Currently, as Premier, Higgs has taken a courageous stand of principled opposition to funding abortions at private, for-profit facilities, even in the face of mainstream media hostility and threats from the Trudeau government.

On the negative side, the PC Party put forward Bill 11 in June 2020, which, if it had passed, would have forced all children in the province to be injected with any and all vaccines deemed necessary by the authorities, without the right to conscientious or religious objection and exemption.

This would mean that pro-life citizens would be unable to reject an unethical vaccine using cells harvested from aborted babies. Fortunately, Bill 11 was defeated.

Mr. Vickers replaced former Liberal Leader Brian Gallant, who quit in 2018 after a poor electoral performance. While Premier, Gallant brought abortion-on-demand to the province in 2015 by eliminating the modicum of protection that existed for preborn babies: a longstanding rule that required a sign-off by two doctors to certify that an abortion was "medically necessary" before it could qualify for funding by taxpayers.

As a result of the Liberal policy change, abortion is now fully funded by taxpayers throughout all 9 months of pregnancy, for any reason or no reason at all.

Vickers is even more stridently pro-abortion than his predecessor. In a pledge from the campaign trail in August 2020, Vickers pledged to extend taxpayer funding of abortion even to private abortuaries, like Clinic 554 in Fredericton, the former Morgentaler Clinic, in order to ensure greater "access" to abortion "services".

In the same breath, Vickers also revealed his total subservience to transgender ideology, stating that his desire to fund private abortion mills would benefit "both women and the LGBTQ2 community".

He was referring to Clinic 554's hideous practice of using cross-sex drugs to suppress and distort the hormonal balance of clients suffering from Gender Identity Disorder, in order mimic the appearance of the opposite sex.

This Orwellian assertion by Vickers demonstrates not only a cruel indifference to the killing of unborn babies, but also a delusional slide into the anti-reality world of transgenderism, along with its accompanying speech codes that are destroying our constitutional right to freedom of expression and freedom of religion.

If you have not yet voted, we hope this Voter's Guide is of some help to you.