News > CLC in the news after Roe v. Wade defeat

CLC in the news after Roe v. Wade defeat

NOTE: This is an online version of an email that was sent to supporters.

Do you know what’s been made abundantly clear since Roe v. Wade was defeated?

It’s that the devil loves abortion and hates the pro-life movement.

You can see how the spiritual side of this manifests itself in the news coverage of the wild hysteria, rage, and hatred that's spreading across the United States and around the world.

Abortion activists everywhere are losing their minds because of a just ruling that’s already preventing unborn children from being killed in the womb.

The U.S. Supreme Court finally came out and said there is no constitutional right to abortion, which is what we’ve been saying for decades.

The defeat of Roe is certainly the greatest pro-life news we’ve seen in a long, long time.

And to share the truth with Canadians about the evils of abortion.

You see, we were inundated with media requests last week, and thankfully, by the grace of God, we were able to deliver.

I can't believe what happened after one of our spokespeople appeared on the CBC, and I promise to tell you more about that in a moment, but first, I want share some of the other coverage with you.

For starters, The Canadian Press picked up our news release, and quoted us praising God for the decision.

The Ottawa Sun, meanwhile, used my quote on how “science is clearly on the side of life,” and that the “courts are now finally beginning to catch up with science.”

We were covered in the Edmonton Journal, too. They even used one of my favourite lines from our press release:

“When life is winning in America, it is only a matter of time before life will be winning here in Canada too.”

Our friends at LifeSiteNews made sure to mention us in their coverage. Here’s one of their stories you can read at your leisure, and here’s another, one where they contrast our position with that of our pro-abortion prime minister.

We weren’t just covered in print, though.

The big TV networks were keen on hearing from us, as well.

One of our Youth Coordinators and CLC spokesperson, Josie Luetke, was interviewed by CTV, and here’s the link where you can watch the report that she appeared in.

Josie was also interviewed by the State Broadcaster …

And this is where things heat up. 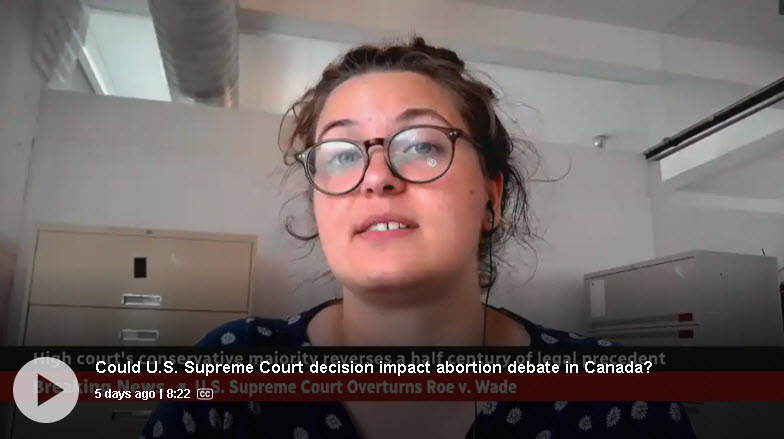 Josie was solid in her interview with the CBC.

The host pressed her at times, but Josie held her ground.

Overall, the segment was good and seemed pretty fair, at least to me, anyway …

But then torches and pitchforks came out ...

Look at this one Tweet to the CBC “Power and Politics” (PnPCBC) account by a former NDP MPP from Ontario:

Ms. DiNovo is no fan of ours, but seeing how she’s a radical pro-abortion activist, I’m not surprised.

Guess who else was “triggered” by seeing CLC on TV: 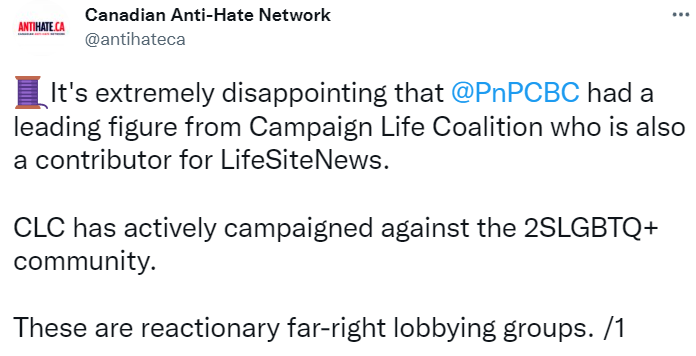 Most people have no idea what the Canadian Anti-Hate Network is, but I’ll tell you one thing – it’s no friend of the pro-life movement.

Basically, this is a group that gets serious funding from the Trudeau government to monitor and report on groups they consider “hateful” …

It's almost like these guys are getting paid (with your tax dollars) for bullying groups like CLC to try and keep us quiet.

Now, have a look at these social media posts by a Parliamentary Press Gallery journalist:

I thought covering both sides of a story was one of the fundamentals of good, basic journalism?

To be fair, the CBC actually did its job here by inviting CLC to explain the pro-life position, so kudos to them. They even mentioned us during the breaking news coverage in their on-screen graphics: 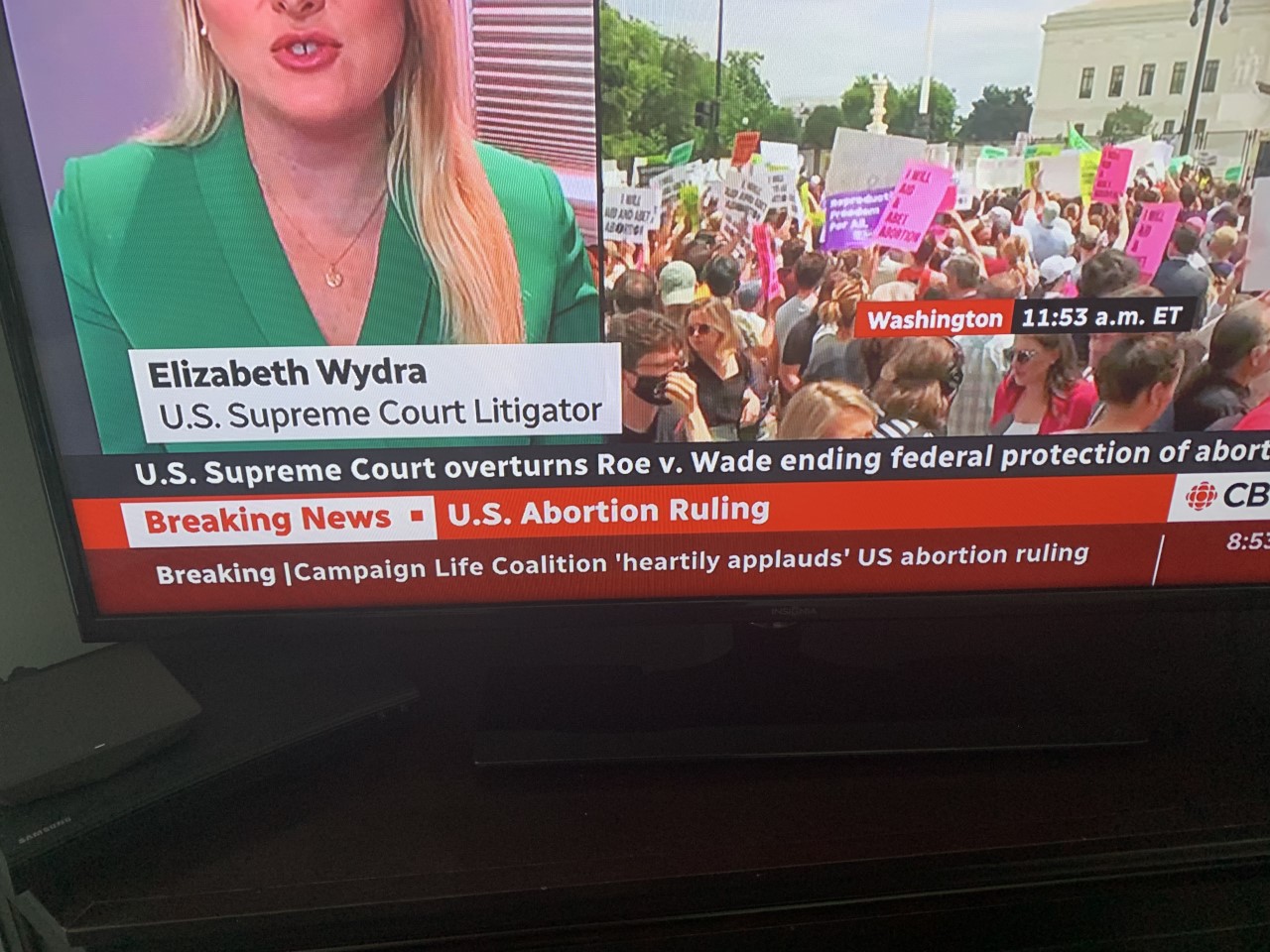 ABOVE: Screenshot from the CBC News Network
during coverage of the Roe v. Wade reversal.

That’s what fair and balanced journalism is supposed to look like, right?

Unfortunately, the vehement opposition to simply having us on the air is just another “sign of our times,” where the spirit of the Cancel Culture movement is running wild.

Campaign Life Coalition is definitely in the crosshairs.

We’ve already been blasted with phone calls to our offices from pro-aborts shouting “my body, my choice,” and people calling us “white supremacists” for some reason.

We've also had a few cyber-attacks on our websites.

We won’t back down, but this kind of hostile, anti-life sentiment is growing, and so is the mob of voices who want to shut pro-lifers out of the public square …

And this is where we need your help.

Please read and share the links to all the articles and videos in this email ...

And don't forget to pray hard, too!

It’s up to grassroots pro-lifers, ordinary people like you and me, to expose the evils of abortion, which kind of reminds me of the Parable of the Sower.

As we plant the seeds of truth, some of them will never take root and die out.

But the message will resonate with others, and only God knows right now what kind of fruit this will bear in the future.

That’s why we must keep going, because what’s the alternative?

Do we sit back and wait for someone else to stop the 100,000 babies from being killed by abortion every year in this country?

The averages show us that today alone, as you’re reading this, some 300 babies will be aborted.

This is why the pro-life movement won’t ever give up in its mission to end abortion in Canada.

The hope is, friend, that as we spread the pro-life message to a bigger and bigger audience, we’ll start to see a Culture of Life grow across Canada.

But we can only do this if we work together – to be a united voice for the voiceless.

Thank you for your support and please keep us in your prayers.

P.S. Our pro-life evangelization through the media is only possible because of the help we get from our supporters. Please click on the link to help us continue with our outreach. If you don't wish to give online, you can send cheques to: 157 Catharine St. N., 2nd Floor, Hamilton, ON, L8L 4S4 (Phone: 1-800-730-5358). Please include the words "Make Abortion Illegal" in the memo field.