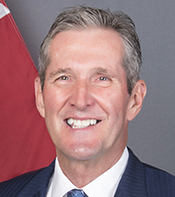 CLC rating: Pro-abortion, anti-traditional marriage
Rating Comments: In 2013, MLA Pallister vigorously opposed the NDP's dangerous Bill 18 which attacked parental rights, family values and religious freedom. He also opposed a draconian censorship law that had been proposed by the NDP in order to take away the constitutional right to freedom of expression from pro-life Manitobans. In 2008, as a federal MP, Mr. Pallister responded to a CLC survey by expressing his disagreement with the Order of Canada being conferred on notorious abortionist Henry Morgentaler for the mass-murder of preborn children. Unfortunately, in the 2016 election cycle, Mr. Pallister stated that he supports legal abortion, and suggested that he no longer supports the natural and historic definition of marriage.
Position: Premier, President of the Executive Council, Minister of Intergovernmental Affairs and International Relations
First elected (yyyy.mm.dd): 04-Sep-12
Previous Occupation: Member of Parliament for Portage-Lisgar
Birthdate (yyyy.mm.dd): 06-Jul-54
Percentage in last election: 64.4% (2016); 55.18% (2012)
Victory margin last election: 48.1% (2016); 23.62% (2012)
Religion / Faith: Unknown

Here are quotes from Brian Pallister on various life and family issues:

Pallister took a principled stand against the NDP's radically sexualized Bill 18 which mandated gay pride clubs in all schools under the guise of bullying prevention, by pointing out that by including "hurt feelings" as a basis for judging someone to be guilty of bullying, teachers and school staff could be charged with "bullying" for simply carrying out their duties, and it could initiate a false accusation against teachers and other students, in revenge:  "This bill is dangerous, if not amended, because what it may well do is exacerbate the already real circumstance within our schools that bullies will...lash back at a teacher, staff member, another student, and they will make accusations as a way of defending themselves.... With the definition of bullying being so broad it might exacerbate that already existing problem." [Winnipeg Sun, 'Teachers a target in Bill 18: Pallister', August 30, 2013]

Here are the answers for the questionnaire as provided by Brian Pallister on 2019.

There are no videos available for Brian Pallister.