Most Canadians would never suspect what Campaign Life Coalition’s new video exposé has just revealed, that Canada’s foreign aid program is coercive at its very core.

“Obsessed: Canada’s Coercive Diplomacy” is an eye-opening discussion of a scandalous government policy. I encourage you to watch it and share it with your friends and family.

Under the guise of ‘helping women and girls’, Prime Minister Justin Trudeau’s so-called “Feminist International Assistance Policy” completely disregards African views and values and, in many cases, degrades and dehumanizes the African people, their traditions, and institutions.

Mr. Trudeau, along with his appointee, Ms. Karina Gould (Minister of International Development), are acting as “benevolent” foreign masters. They are shackling Africans to new systems of abuse and degradation “for their own good” while ignoring their basic needs and fundamental human rights.

The African people are in dire need of basic essentials: food, nutrition, clean water, sanitation, education, employment, policing, as well as protection from growing Islamic terrorism. But the Trudeau government, through its “Feminist International Assistance Policy”, is prioritizing ideological conquest over humanitarian provision.

Life-or-death needs are taking a backseat to the goal of imposing radical feminism on Africa.

As Ms. Ekeocha laments, “Can’t they see we don’t even have food to eat?” 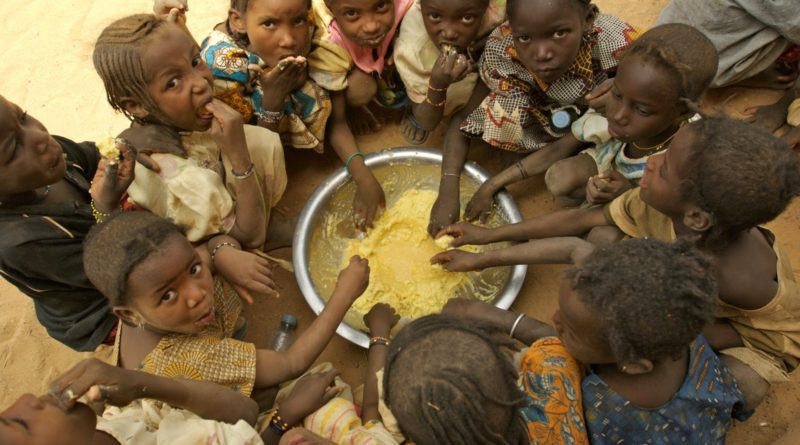 Arrogantly claiming to know what is in Africans’ best interests, Mr. Trudeau is harnessing the power of billions of dollars of our tax money to push harmful, unwelcome ideas, policies, and “solutions” across the African continent.

As Ms. Ekeocha explains: “Western donors [like the Canadian government] are not listening to Africans... They are really trying to create a new regime in their image and likeness.”

Although Mr. Trudeau will not admit to his inexcusable disrespect for African nations and their people, his actions speak louder than words.

Mr. Trudeau takes a “we-know-better-than-you” approach, which perpetuates negative stereotypes about the views and values of Africans.

You might think the Trudeau government would try to hide its coercive objectives and condescending attitude toward Africans, but it isn’t hiding anything. Just take a look at its published “Feminist International Assistance Policy” (FIAP).

FIAP reveals that Canada’s goal is to change Africa’s culture and society: “[We] require the transformation of social norms and power relations. This objective is also essential for the achievement of all other development priorities.”

In other words, according to Canada, traditional African society is backwards and inferior. And if Africans resist our efforts to force change, then we will back away from “other development priorities”, such as providing food, water, and other essentials. That is quite a threat!

FIAP also states that Canada’s goal is to target depopulation and preborn-killing efforts in Africa: “Canada will support increased access to a full range of health services, including family planning and modern contraception; comprehensive sexuality education; safe and legal abortion... This work will be supported by an investment of $650 million over three years.”

This shows that Canada has earmarked special funding to reduce the population across the African continent. According to Justin Trudeau, the “solution” to eradicating poverty in Africa is to eradicate the poor in Africa! He is determined to ramrod his diabolical plan down the throats of Africans, totally ignoring their wishes, values, and heritage.

As Ms. Ekeocha asserts, “Africans already have their thoughts and views and values on these things.” But, apparently, Mr. Trudeau knows better! 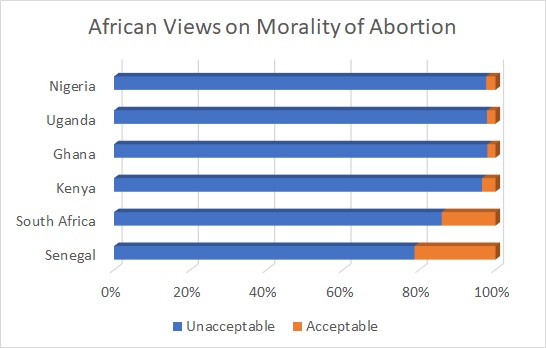 But how can the government of Canada presume to “address” the laws of foreign governments? This is not their business! And to try to do so in a manipulative way – using billions of dollars as leverage – is a moral outrage! How would we like it if another country did that to us?

Finally, FIAP states that Canada’s goal is to subvert African culture and customs, using our tax dollars to impose an abortion agenda: “Going forward, Canada will increase its support for initiatives that advance gender equality and women’s empowerment [i.e. feminist ideology] as their principal focus.... by 2021-22 at the latest, at least 95 percent of Canada’s bilateral international development assistance investments will either target or integrate [feminist ideology]. This shift will establish Canada as a feminist donor and a leader in promoting [feminist ideology] around the world.”

The Trudeau government is bragging about its neo-colonial vision – and using Canadian taxpayers’ money to push its radical ideology on needy and vulnerable Africans. In fact, at least 95% of Canada’s total financial aid to hurting countries will have ideological strings attached. How arrogant!

Just to show you this radical agenda in action, take a look at the chart below, which I obtained through the Global Affairs Canada website: 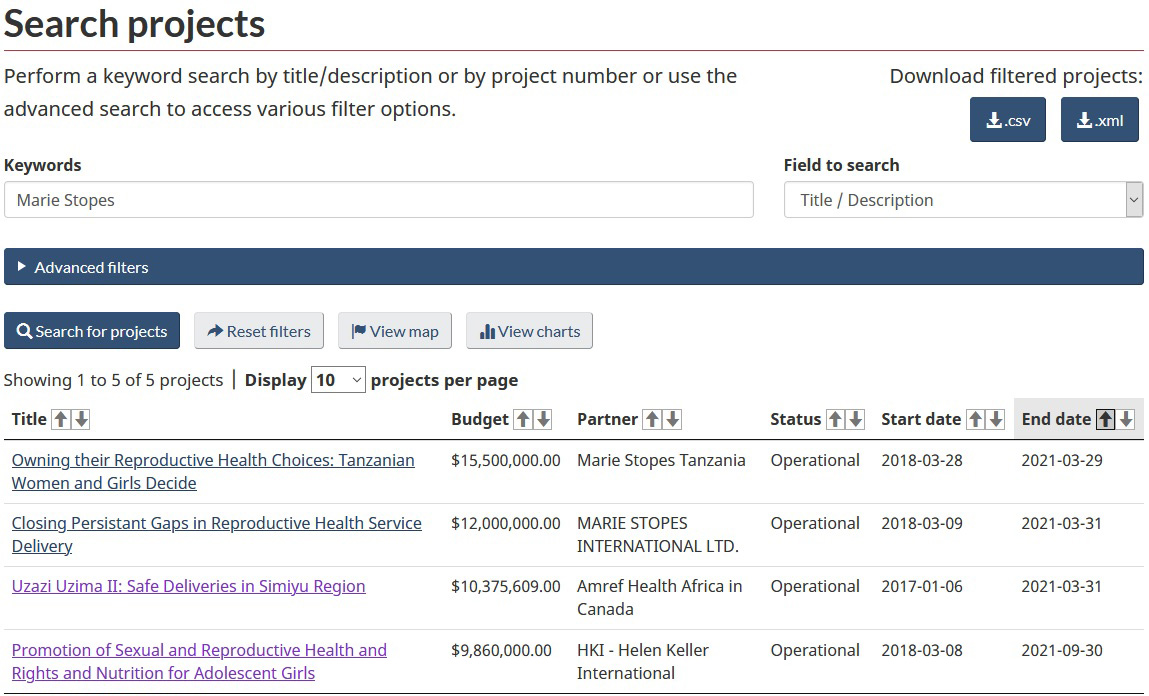 This shows four African aid projects currently funded by the government of Canada (totalling over $47 million). Tragically, these projects are in direct or indirect partnership with the infamous and discredited group known as “Marie Stopes” (now known as MSI Reproductive Choices).

Marie Stopes is a UK-based abortion provider that frequently runs afoul of the law in Africa. In a LifeSite News article, Marie Stopes is reported as performing illegal abortions in Kenya and Niger. The government of Zambia defunded them, and they are being investigated in Tanzania.

Why is the Trudeau government continuing to funnel our taxpayer money into this type of organization – and others like it? Why are they pushing illegal activities, killing African preborn babies, and subverting the sovereignty of African nations? Why do they think they can get away with what some would consider racist behaviour under the cover of a “feminist policy”? Are feminists OK with this? What do Canadians – and Canadian women in particular – think?

It is urgent that ALL Canadians speak out against Mr. Trudeau’s policy of tying much-needed aid to a radical feminist agenda. At its core, this agenda is fueled by coercion, population control, and a complete disregard for the right to life of vulnerable populations. While it does not openly claim to de-humanize Africans, it actively works to reduce the number of Africans, kill their unborn, usurp their laws and culture, and corrupt their youth.

This is why, in conjunction with the release of “Obsessed: Canada’s Coercive Diplomacy”, Campaign Life Coalition is also launching a petition to Ms. Karina Gould, Minister of International Development.

Ms. Gould is the one directly responsible for implementing Mr. Trudeau’s coercive and neo-colonial vision in Africa and elsewhere. She is the one doling out billions of dollars of our tax money. She is the one advancing the abuse and demise of the African people through the FIAP program. There will be a great weight for her to bear come Judgement Day – unless she speaks up now and calls out Mr. Trudeau’s scheme.

Please join me in signing this important online petition and sharing it far and wide. Email it to your friends, let your pastor and church know about it, and spread it around on social media.

Let’s take up the cause of saving lives in Africa! As we do, we can help restore the tarnished image of our nation. In the words of Ms. Ekeocha, Canada used to be “the ‘nice guys’...the ones who will stand and listen [to Africa].” Let’s make Canada that type of country once again!