The scientific term for the process of creating a human (or animal) clone is called Somatic Cell Nuclear Transfer. This process results in the creation of an exact, genetically-identical, twin of the person who is cloned.

The cloned being is fully human. It lacks absolutely nothing that would make it, biologically or genetically, less human than a being who is conceived through sexual intercourse.

How does human cloning work? 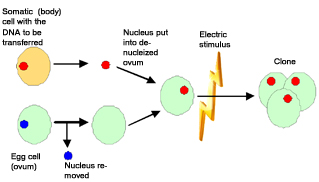 Let's imagine that you want to be cloned. First, a scientist will take a reproductive ovum (or egg cell) that has been supplied by some anonymous "donor" female. If you're a female, you could supply your own ovum. The scientist then removes the nucleus from the ovum. Imagine this process as taking the yolk out of a chicken egg and leaving only the egg white.

Next, the scientist takes a single skin cell from your body, also called a somatic cell. He removes the nucleus from that skin cell and places it inside the "empty" ovum. The nucleus of your skin cell contains your genetic code - your DNA.

Finally, the scientist stimulates the ovum with electricity. This tricks the ovum into "thinking" it has been fertilized by a sperm.

At that moment, a new organism which did not exist before is alive and growing.

Reproductive cloning... your daughter, or your sister?

Cloning presents many concerns if allowed for reproduction. On a very basic level, before getting to the more grave moral problems, it sows confusion in familial relationships. Following the example above, let's assume that you're a female and that you supplied your own ovum for the cloning. Then, you implanted that embryo in your womb and allowed him or her to come to term. The child who is born would be both your daughter AND your sister.

Continuing the example, let's assume that you, as the woman who was cloned and gave birth to the clone, already had a son. Would the newborn clone be his sister? Or his aunt?

On a more grave level of immorality, the process of creating clones for infertility treatment would necessarily require creating several extra clones. The famous Dolly the sheep clone required over 200 attempts before one clone survived. Typically, only one clone would be implanted in the woman. The rest would be destroyed or discarded. In other words, innocent human beings would be murdered.

On the level of morality, reproductive cloning is also wrong because it tells God, "Move over, you're in my seat". It takes out of His hands the act of creating life. Human cloning does so by violating natural laws which God Himself has set in place.

In Canadian law, "reproductive" cloning is illegal for now, due to the 2004 Assisted Human Reproduction Act.

Therapeutic cloning refers to the creation of clones for the purpose of killing them and harvesting their body parts for regenerative medicine or research into potential cures. This usually occurs around day 5 or 6 of the clone's life.

Despite the semantics, there is no physical difference between "reproductive" and "therapeutic" cloning. It is simply a spin on words so that politicians and scientists can hide from their guilt and the shocking immorality of what they condone. In reality, to conduct "therapeutic" cloning is to murder innocent human beings.

In Canadian law, "therapeutic" cloning is illegal for now, due to the 2004 Assisted Human Reproduction Act. It is permitted in other countries such as Australia, China, Sweden, the United Kingdom, and the United States.

Does a human clone have moral rights?

Science is absolutely clear as to when human life begins. It can be traced to no point other than the moment of fertilization/conception. In the case of a clone, that is the the moment of creation when the egg carrying the transferred nuclei is "stimulated" into fertilization.

At that moment, a new embryonic being is alive. This being did not exist the moment before. It has a full genetic compliment of 46 chromosomes, the genetic marker of a human being. The genetic code determines its gender and directs the being's development and growth from the prenatal stages, through adulthood, to natural death.

As such, a human clone is irrefutably a human being, and must be accorded the same rights and dignity as all humans. The right to life is the most fundamental of all. Size or age cannot be an excuse to murder these unborn humans, just as size or age is not a justifiable excuse to murder adult humans.