Canada's law is being challenged in court

In December 2011, the B.C. Supreme Court, under a radical feminist, pro-abortion judge by the name of Lynn Smith 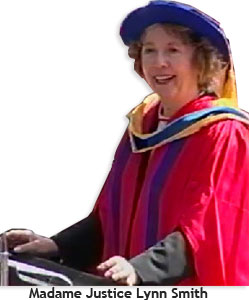 , accepted a challenge to the constitutionality of Canada's criminal code prohibitions against assisted suicide. This is known as the Lee Carter and Hollis Johnson et al. v. Attorney General of Canada case.  Initially it had one plaintiff, Lee Carter, but since, the judge allowed other plaintiffs to attach themselves to the lawsuit, including Gloria Taylor, a woman with Lou Gehrig's disease.  The plaintiffs are represented by the leftist BC Civil Liberties Association.  This is yet another assault on democracy as the suicide/euthanasia lobby has turned to the courts after Parliament overwhelmingly rejected a bill in 2010 by a vote of 228 to 59.  This agressive lobby has decided to do an end-run around democracy and force their way through the courts.

Justice Smith handed down a horrendous decision on June 15, 2012 which opened the door to euthanasia and assisted suicide on demand, despite the fact that the Supreme Court of Canada had already ruled that our prohibitions against euthanasia are indeed constitutional. She therefore ignored existing jurisprudence. A read through her decision reveals bizarre, judicial gymnastics. Her 395-page ruling is an exercize in illogical and contradictory arguments, all the while pretending that she was only legalizing 'physician assisted death' for very narrow, rare situations.

For instance, she makes the ridiculous claim that prohibiting the killing of patients by doctors violates section 7 of the Canadian Charter of Rights and Freedoms which states "Everyone has the right to life, liberty and security of the person and the right not to be deprived thereof". Huh? How does the right to not be deprived of life become the right to be lethally injected by a doctor? Justice Smith puts her raw political activism on display again by ignoring a mountain of irrefutable evidence proving that wherever euthanasia and assisted suicide have been legalized in other countries, it lead to a suicide contagion, expansion to other categories of killable persons (including newborns with disabilities) and to an epidemic of doctors terminating their patients WITHOUT REQUEST OR CONSENT. Smith had the audacity to claim that "safeguards" have been effective in these other countries. To see the type of evidence that Smith claimed did not exist, watch our 'Slippery Slope' video here.

Smith's ruling also expanded euthanasia and assisted suicide to people beyond those who are terminally ill. She defined the criteria vaguely as "grieviously and irremediably ill". We know that in The Netherlands a similar definition was interpreted in subsequent years to include not only "physical" suffering but also "mental" suffering and depression. The courts in that "progressive" nation eventually ruled that it is "discriminatory" to differentiate between one person's physical suffering and another person's mental suffering, and therefore the state had to help depressed persons kill themselves, even if they're perfectly healthy.

Fortunately, Campaign Life Coalition and other anti-euthanasia organizations carried out campaigns to urge the federal government to appeal the activist-judge's ruling. This included letter writing campaigns to the Attorney General of Canada, petitions and even a 60-second television commercial campaign on the Sun News Network which reached over 3.2 million viewers Canada-wide.

On June 15th, 2012, Justice Minister Rob Nicholson announced that the Canadian government would appeal the BC Supreme Court decision in order "to protect all Canadians, including those who are most vulnerable, such as people who are sick or elderly or people with disabilities”. The case was heard by the Court of Appeal for British Columbia who overturned the lower court’s ruling in a two-to-one decision in October 2013.

Subsequently, the applicants in the case appealed the second ruling to the Supreme Court of Canada. On February 6, 2015, the Supreme Court released their unanimous judgement in favour of euthanasia and struck down sections 241(b) and 14 of the Criminal Code. The court framed criminalization of euthanasia as an infringement on the right to life, guaranteed under section 7 of the Charter of Rights and Freedoms. It stated that a person who is “grievously and irremediably ill…has two options: she can take her own life prematurely, often by violent or dangerous means, or she can suffer until she dies from natural causes. The choice is cruel.” This presents a disturbing compromise; so that people do not kill themselves sooner let’s kill them later, by doing this we actually give life rather than take it. One mustn’t look far to find the lethal and devastating flaws in this compromise.

After its decision was released, the Supreme Court gave Parliament 12 months to pass a law on euthanasia. This was later extended to 16 months when it became obvious that a bill would not be passed by February 2016. On June 17, 2016, Bill C-14 received royal assent, officially legalizing euthanasia in all of Canada. Click here for more information on Bill C-14 and the law in Canada as it stands today.

Elected representatives should have done their job

While we hoped that a victory would be obtained at the Supreme Court level, it was necessary for Parliament to be prepared to use the Activist-Judge Override Provision as a last line of defense.

Canada's constitution lays out the role of the legislative branch of government as those who have sole responsibility for writing laws. On the other hand, the judiciary's constitutionally-defined role is to interpret law, not to write it. Over the past 40 years, we have seen an increasingly unruly, activist judiciary that will often usurp the role of parliament by writing law from the judge's bench.

The Charter of Rights & Freedoms provides elected members with an “Activist-judge Override provision” (aka Section 33, The Notwithstanding Clause), built into the Charter itself. However, due to the fear of negative coverage from a hostile left-wing media, our duly elected members of parliament have been reluctant in the past to put the judiciary in its place when these usurpations occur, despite a duty to exercise the provision.

How to help.... let-ter your light shine!

After contacting the above elected representatives, write a letter-to-the-editor of your local newspaper, as well as national papers like The National Post, Toronto Star, Toronto Sun and Globe & Mail.

Talk radio is also a powerful media for the average person to get his/her voice heard. Call into talk radio shows and tell them your concerns about the Carter v. Attorney General of Canada case. Talk about the slippery slope demonstrated in countries like Holland, Switzerland, Belgium and the state of Oregon.

Do further study on the issue of "mercy killing"