I want to share with you some examples of why Christians and people of other faiths must elect God-fearing school trustees in their local school boards this October 24th in the upcoming Ontario municipal elections.

Our schools are awash in immorality and false teachings that will inevitably lead the next generation away from God, and into atheism or practical paganism.

This is true both in Ontario’s public and Catholic schools.

First, I’ll share with you an example of this moral corruption in the Catholic system. Afterwards, we’ll look at the public boards.

Let me tell you about Mr. Paulo De Buono. He’s an elementary school teacher at St. Anne’s Academy, in the Toronto Catholic School Board (TCDSB). This man has taught children as young as Grade 1.

As you probably know, the Catholic Church condemns abortion and artificial birth control as intrinsic evils. This is unchangeable Church doctrine.

Whether or not you agree with Catholic doctrine, every person not living under a rock knows that if you work as a teacher at a Catholic school, you’re expected to promote, or at least, not contradict Catholic moral teaching. Right?

Well, Mr. De Buono has publicly boasted that he will contradict fundamental Catholic doctrine on abortion and contraception in his classroom, to his students!

It’s surreal to behold, but this teacher bragged on Twitter that he’s going to teach his students next year that abortion is a “right” and “condoms are good”!

In a Catholic school!

See this screenshot of his tweet, gloating about it. 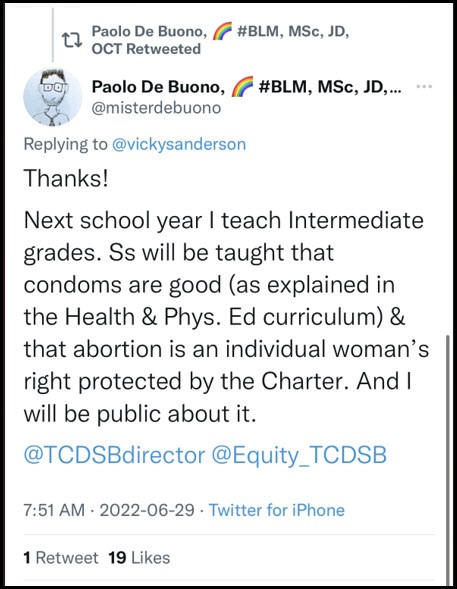 This is an act of insubordination.

His employer, the Board of Trustees, has legal justification to terminate his employment. De Buono’s actions represents total defiance towards the moral teachings that he is ethically, spiritually, and contractually obligated to uphold as an employee of the Board, which is itself an arm of the Catholic Church.

And yet, neither the Principal at St. Anne’s nor the elected Board of Trustees have taken any action against this insubordinate employee.

Why hasn’t the Board of Trustees fired him yet?

Is it because most of the Trustees agree with the anti-Catholic positions of De Buono, and are happy to see him peddling them?

The answer, quite possibly, is Yes.

Eight out of the 12 currently elected TCDSB trustees voted to fly the homosexual Pride flag – a symbol of grave sin according to Catholic doctrine - at every TCDSB school. So, it’s quite possible they reject all the other Catholic teachings on sexual morality too, including those about abortion and contraception.

Until those eight “Catholic” Trustees are replaced, heretics like De Buono will be given free rein to indoctrinate the next generation with his decidedly anti-Catholic views.

This is why we need faithful Catholics, right across Ontario, to step forward and run for school board trustee.

This situation is not unique to the TCDSB. Similar anti-Christian witness is taking place in every Catholic board across the province. 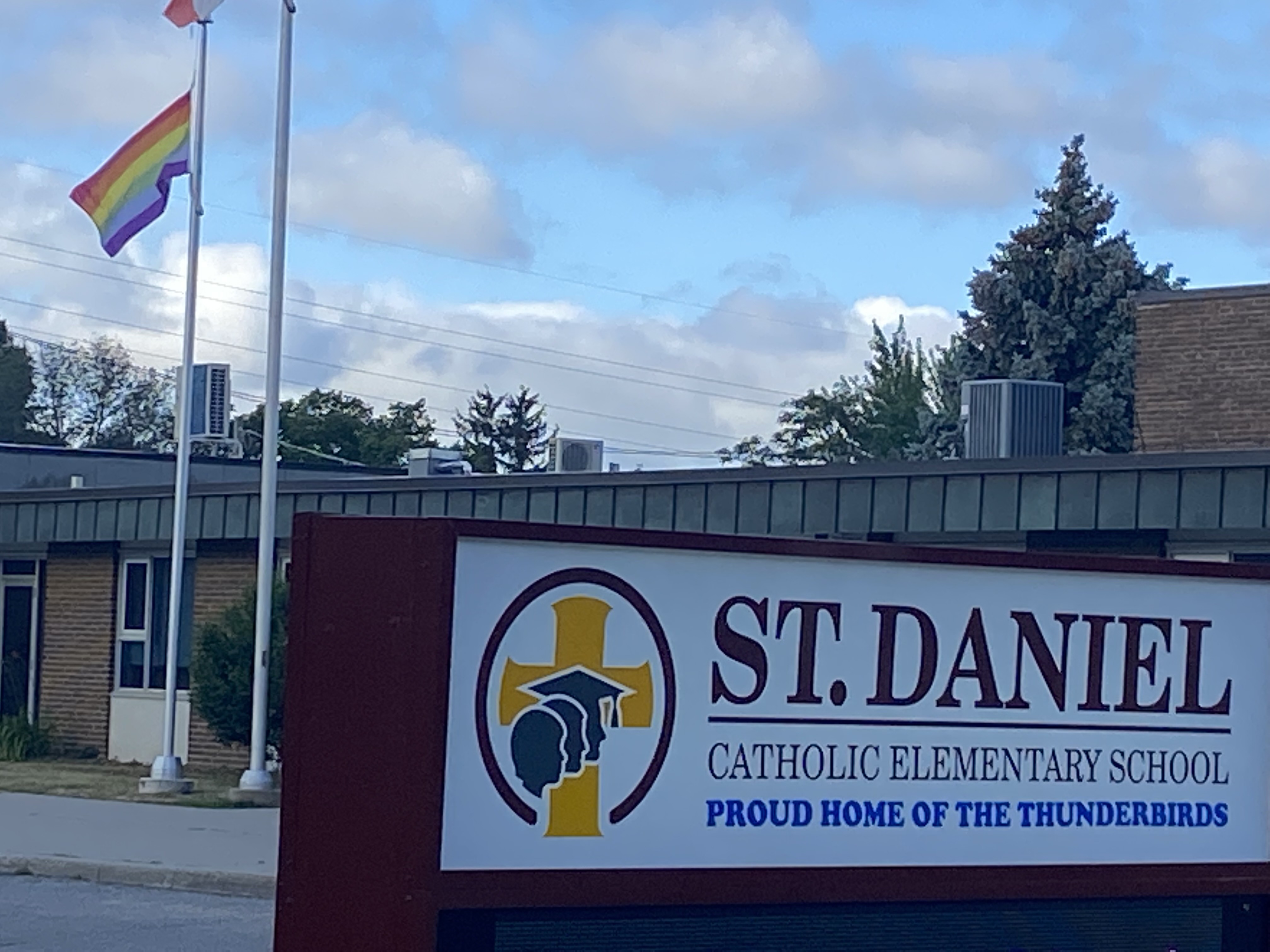 We need to clean house.

If you’re a faithful Catholic and willing to run for Separate school trustee in your local board, please email me and let me know, at [email protected]. The deadline to register as a candidate with your local municipality is August 19th.

NOTE: If you’re a healthy, retired or semi-retired person, you’re the ideal candidate. Contact us to find out why.

Now, let’s turn to an example of the harmful “woke” brainwashing that takes place every day in the public school system.

In January 2022, a Waterloo Region District School Board (WRDSB) teacher was cut off and cancelled during a speech at the Board meeting.

The teacher’s name was Carolyn Burjoski, and she was cancelled four minutes into her talk by Board Chairman Scott Piatkowski, when she expressed concern for the age inappropriateness of two books which had highly sexual references and which seemed to aggressively promote transsexuality to kids.

In one of those books, a young boy talks to his friend about loving “naked girls”, causing the friend to get confused and think he’s “asexual” because he’s not into “naked girls”.

In the second book, a title called The Other Boy by M.G. Hennessey, puberty blockers and testosterone are promoted to transition a teenager from female to male. The risk of making the girl infertile is downplayed as no big deal.

The teacher objected to these books, pointing out the danger of pressuring children to think about sex too soon, and of making “very serious medical interventions seem like an easy cure for emotional distress”.

What did this caring and courageous teacher get for her troubles?

Trustee Piatkowski shut down her speech and accused her of violating the Human Rights Code. Then, he had the teacher removed from the meeting.

Trustee Piatkowski could be putting children in harm’s way and is silencing principled teachers who might advocate for their protection. He needs to be defeated in the next election, and replaced with a trustee who puts children’s innocence, their psychological and physical health ahead of pushing “woke” ideology.

But the WRDSB is no exception.

Get out your broom. Help us clean house on October 24th.

If you’re willing to run for Public school trustee in your local board, please email me and let me know, at [email protected].

The physical and spiritual well-being of the next generation of Ontario children depends on God-fearing men and women running for election and taking over these wayward boards.

Please consider running yourself or encouraging someone you know who might be suitable. The deadline to register is August 19th.