First, they legalized abortion – killing innocent preborn babies up to the moment of birth.

Next, they legalized euthanasia – killing diseased, disabled, and (soon) depressed adults who “consent”.

God help us to stand against this evil! Sign our petition today.

On October 7th, Dr. Louis Roy, representing the Quebec College of Physicians, called for the euthanasia of sick and deformed infants. He made this proposal in his address to the Parliamentary Committee tasked with reviewing Canada’s euthanasia law (so-called “MAiD” or Medical Assistance in Dying).

This Liberal-dominated Committee, made up of 10 MPs and 5 Senators, is supposed to act as a check and balance on this deadly new “MAiD” law. At least, that’s what we thought. The Committee’s role was to examine the first five years of killing-by-consent, discuss abuses, and make recommendations to protect vulnerable Canadians.

However, instead of calling for less killing and more restrictions, this Committee is seeking out ways to expand who may be killed, when, and how.

Case in point is the Committee’s willingness to entertain Dr. Roy’s abominable proposal. Claiming to speak on behalf of Quebec doctors, Dr. Roy said that children under age one with “severe deformations” and “grave and severe syndromes”, whose “survival is null, so to speak,” should be euthanized.

That’s what we call INFANTICIDE. It’s a barbaric practice and a Criminal Code offence. 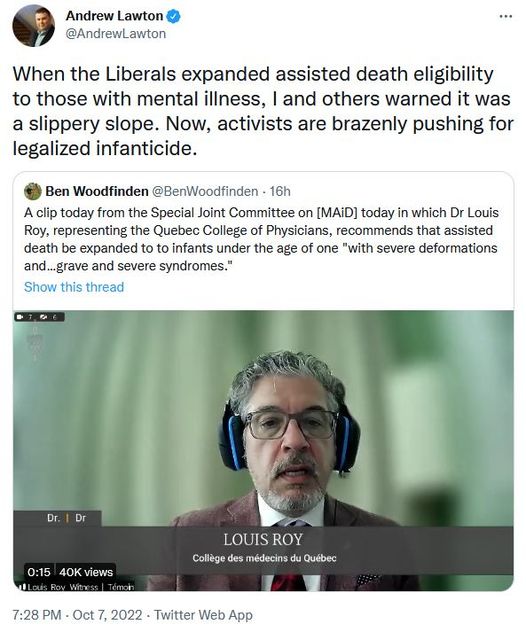 This “doctor” should not have been given 5 seconds of the Committee’s time to express such wickedness. His criminal proposal should have been immediately and unequivocally rejected by the Committee. But it was not.

Shockingly, Dr. Roy’s murderous scheme was politely received and duly entered into the parliamentary record. Neither he nor the Quebec College of Physicians, which he represents, was rebuked.

In fact, the Committee fully knew what it would hear before Dr. Roy said a word. They allowed him to speak knowing what he would say.

Apparently, the majority on the Committee has no problem with any of these gruesome concepts.

How quickly our leftist politicians have gone from legalizing euthanasia in the rarest of cases to normalizing the killing of almost anyone with any type of vexing disease, disability, or deformity! Truly, we are well on our way to “euthanasia on demand”, and beyond that, to the grim possibility of a future government deciding who gets to live and who ought to die.

Dr. Roy’s call for infanticide was a rude awakening for many ordinary Canadians, jarring the dulled moral conscience of a nation speeding hellishly down the “slippery slope”. In response, we have seen a large public outcry against Dr. Roy and the Quebec College of Physicians.

A recent National Post article expresses that outcry unambiguously. We read: “We must not become a country that sanctions the killing of infants under the guise of compassion.”

Even the left-leaning Toronto Star published this: “We should not have a system that kills people because they’re desperate or disposable or too costly to keep alive. But right now we’re heading toward something like that, and it seems we don’t know how to stop.”

Disability rights advocates are also speaking up. In another National Post article, Inclusion Canada, a national federation of thirteen organizations, states: “Canada cannot begin killing babies when doctors predict there is no hope for them. Predictions are far too often based on discriminatory assumptions about life with a disability.” They also note, “providing MAiD [euthanasia] to a person who cannot consent is a standard that is wildly dangerous for all persons with intellectual disabilities in Canada.”

As for you and I, as pro-life, pro-faith Canadians, we need to be the loudest voices in the rising chorus of dissent against euthanasia and infanticide. We need to be leading the way back to a culture of life. That’s why we have launched a new petition calling on the Quebec College of Physicians to reject infanticide, and to discipline doctors like Dr. Roy who speak out in favour of killing vulnerable infants. His licence to practise medicine should be revoked!

We need to call the College back to its historic mission of healing and caring. It must turn back to that ancient Hippocratic Oath, in which doctors pledge to “do no harm”.

Our country is hurtling towards self-destruction at breakneck speed. More and more classes of Canadians are being dehumanized and deemed “killable”. More and more of our neighbours are falling prey to the death doctors and their lies. Now newborn babies are at risk.

Help us to take a bold stand against the killing. Help us to speak up for the vulnerable, the sick, the deformed, the disabled, and the depressed – of all ages and classes. The sanctity of human life must be defended from conception to natural death – for all Canadians.

Please sign and share our petition today. And may God bless our efforts and bring repentance to our land.