What if I told you that school boards across Canada are teaching a form communism in the classroom?

The evidence for this conclusion was presented last week, on November 29.

Anthony Jeethan, a teacher who serves as one of the judges on the Discipline Committee of the Ontario College of Teachers (OCT), admitted that Critical Theory – which is related to Critical Race Theory, a controversial new program being taught in Canadian schools - is derived from the teachings of Karl Marx, the founder of communism. 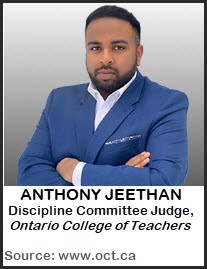 “Marx informs critical theory”, explained Jeethan during an OCT hearing in which he’d been asked to recuse himself as a judge due to a reasonable apprehension of bias against a Christian defendant, the Toronto Catholic School Board Trustee, Mike Del Grande.

Part of the reason why Jeethan had been asked to recuse is that his writing cited The Communist Manifesto, the book co-authored by Karl Marx, an atheist who sought not only to abolish capitalism from the face of the earth, but also religion. Marx famously wrote that “Religion.... is the opium of the people”. 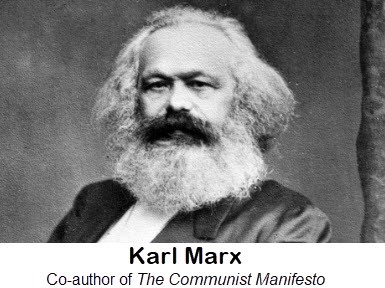 Why was Jeethan’s admission significant?

Firstly, none of the school boards incorporating Critical Race Theory (CRT) language into school curriculum admit to its Marxist origins or its communistic goal of igniting class warfare. They never even mention to parents that these teachings are derived from the writings of communism’s founder, Karl Marx.

In fact, the promoters of CRT normally deny and obfuscate about its Marxist connections whenever the point is raised. For instance, Joshua Sealy-Harrington, a professor and CRT scholar at Toronto’s Ryerson University mockingly dismissed the idea that CRT is a ploy to advance communism, telling the National Post: “Basic psychology will tell you that children learn about race at a young age.… This isn’t some Marxist conspiracy theory. This is literally just true.” (emphasis added)

Secondly, communism is the most murderous ideology in the history of man. Its atheistic and anti-Christian beliefs have given rise to a ruthless totalitarianism unhinged from any moral standard. In the last century, various communist and socialist revolutions resulted in the starvation, death and mass murder of up to 186 million men, women and children.

For example, Josef Stalin the communist dictator of Russia from 1924-1953 committed atrocities that killed up to 60 million people throughout the Soviet empire and imprisoned millions more in labour camps. It’s interesting to note that the former communist Soviet Union was the first in the world to legalize abortion.

Chairman Mao Zedong, China’s communist dictator from 1949-1976 murdered up to 77 million of his own people.

Today, communism is still bringing death and destruction to entire nations, such as Venezuela, which, within a few short years of the socialist leader Hugo Chavez’ election in 1999, went from one of the wealthiest democracies in the world, to an impoverished, totalitarian hell-hole that 6 million have fled as refugees.

Anthony Jeethan’s candor about the Marxist influence in critical theory is a refreshing departure from his academic contemporaries who try to keep it hidden from parents. I’m grateful for his frank honesty.

What is Critical Race Theory?

During Mike Del Grande’s hearing at the College of Teachers, his lawyer, Dr. Charles Lugosi, described CRT as “a modern derivative of Marxism”.

CRT is a modern-day version of the class warfare strategy developed by Karl Marx, the father of communism and socialism.

In classic Marxism, communists would seize control of society by exploiting existing tensions between rich and poor to divide and create conflict in society. They painted one side as the oppressed victim (the poor) and the other as the oppressor (the rich), and then called for violent revolution to overthrow the oppressor, with the Marxists supposedly bringing liberation to the oppressed. However, once in power they became brutal dictators unlike anything the people had ever seen.

Likewise, in modern day CRT, existing or even invented racial tensions are exploited to paint one race as the oppressor (descendants of white Europeans) and others as the oppressed (non-whites), and to call for various forms of discrimination, degradation and vilification against the oppressor class in the name of 'social justice' or 'anti-racism', with the agitators of this new class warfare strategy accumulating vast political power in the process.

In schools where CRT has been implemented, white children are being taught - directly or indirectly - that they are systemically racist, have “white privilege” and are oppressing others by virtue of their skin colour. Black children and other non-Caucasians are being taught that they are perpetual victims, that they cannot succeed in life because they are being systemically oppressed by their white peers, and that the only way to achieve social and economic justice is to discriminate against whites.

This is the definition of racism.

Students are being taught to hate one another based on the colour of their skin. CRT represents the polar opposite of the teachings of the black civil rights hero, Dr. Martin Luther King Jr., who said in his famous 1963 speech:

“I have a dream that my four little children will one day live in a nation where they will not be judged by the color of their skin but by the content of their character.” (emphasis added)

CRT was a necessary invention of the modern-day Marxist in North America who found it impossible to use the classic economic paradigm of rich vs. poor to undermine and eventually overthrow the west’s capitalist and democratic system.

Due to the existence of a large middle class in the U.S. and Canada, Karl Marx’s class warfare sales pitch of the oppressed worker vs. the exploitative factory owner/oppressor was simply no longer relatable in contemporary society.

So, instead, they’ve used a different category, that of race, to stir up conflict in order to destabilize western society. Out of the chaos, so they believe, the socialists/Communists will one day seize power. And once they do, like in all socialist revolutions throughout history, they will silence and oppress everyone who has an opposing political or moral viewpoint.

Interestingly, his publication, Out in the Cold, also reveals that he uses “a critical theory paradigm” to “address typical sources of systemic inequity for rural LGBT youth”.

He goes on to apply the same principles of Critical Race Theory to justify LGBT political supremacy in the school system to replace whatever non-gay, non-trans power structure used to exist prior. Jeethan writes:

“Critical theory contends that culture is riddled with instances of privilege and oppression; research should be focused on creating change in existing social structures (Browne, 2014). In this case, the system in question is the education faculty at Lakehead University, and how it may produce teachers who interact with LGBT students in ways that could be harmful.” (emphasis added in bold)

In a very real way, the culture wars we’ve been fighting in Canada, going back to the redefinition of marriage in 2005, to the radical LGBT-focused sex-ed curriculum battle from 2010 to 2019, to the transgender ideology battle we’re in the midst of now, are all manifestations of Karl Marx’s class warfare strategy which has been used by cultural Marxists to destabilize society, sow division and hatred between peoples, and in the aftermath, place all political and legal power in the hands of the Marxist.

Implications of Jeethan’s appointment by College

The rules established by the Ontario College of Teachers requires that one of the panelists on a Discipline Committee Hearing must be a teacher, i.e. a licensed “member” of the College. The other appointees to the judicial panel, Rebecca Zuretsky and Kiran Qureshi, are not teachers and do not hold a teaching license.

In essence, the teacher who gets appointed to the Discipline Committee is representing the teaching profession at large in Ontario. Anthony Jeethan’s appointment to the tribunal panel as the sole member representing the College of Teachers is therefore significant.

Jeethan’s beliefs are drawn from The Communist Manifesto and Critical Race Theory, and he believes that, “The nature of education is, and will always be, inherently political”.

If he is representative of all teachers, it raises many questions. Are all teachers Marxist? Is education political? Are most teachers also supportive of Critical Race Theory and Marxism? Is Marxism the root ideology which seeks to eradicate the traditional male/female pronouns of “he” and “she”, and the scientific understanding that there are only two sexes – male and female?

If on the other hand Jeethan’s views are those of a fringe minority, why are teachers like him being given the power to sit as a judge on the Discipline Committee? The whole purpose of having a member of the College of Teachers on the judicial panel is to represent the reasonable views of teachers. So why select an individual with such woke, extremist views?

But if he’s on the panel because he does represent the majority view of teachers, then it means extremist views dominate the teaching profession!

Is this what we want?

These Marxist beliefs inculcated in our children? Do Jewish, Muslim, Christian and Sikh families want their children to be educated, or indoctrinated?

This bombshell admission of the Marxism being taught in our classrooms has only been exposed because Catholic School Trustee Mike Del Grande chose to lawyer up and fight back.

If Del Grande had bent the knee to the LGBT lobby, apologized as they were demanding, and given up, we would never have extracted this important confession that Critical Race Theory is derived from The Communist Manifesto.

In gratitude for this service to humanity and parental rights that Del Grande’s expensive legal battle has already provided, would you please consider making a donation to his legal defense fund by clicking here?

Although I’ve already donated to Mike’s crowdfunding campaign, I’m personally so grateful for what he has done for us, that I’ve made a second donation to help cover his legal costs. Please donate by clicking here.