This is my third report on the Ontario College of Teachers (OCT) tribunal hearing in the case of TCDSB Trustee Michael Del Grande, who is being accused of “misconduct” for having objected to his Catholic board adopting a policy to embrace transgender ideology. 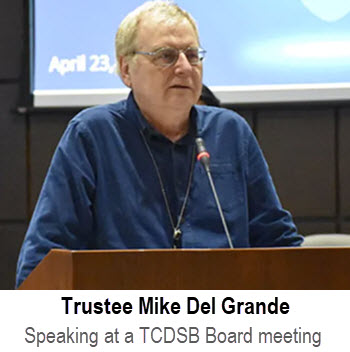 The first report focused on the small victory on November 29 in which an admitted “LGBT activist” recused himself as a judge on the OCT panel.

The second article revealed the astonishing admission by the same judge that a program being taught in Ontario schools is based on the writings of Karl Marx, father of communism.

My third report, today, will explain the rock solid arguments that were presented to the remaining judges by Del Grande’s defense lawyer, Dr. Charles Lugosi. 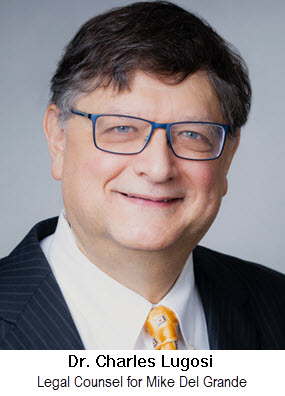 These arguments made it clear that the charges against Del Grande are baseless, and revealed egregious problems with the entire complaint process.

During the opening day of hearings, Dr. Lugosi asked the judicial panel:

“Does the jurisdiction of this panel extend to a politician who is not acting in a teaching capacity?”

This is really the central question of this case. It even has national implications.

Mike being found guilty could create a precedent that potentially affects the Charter right to freedom of expression for all elected officials in Canada. From School Trustees to City Councillors to MPs.

Does a professional College have any right whatsoever to discipline a school board trustee for comments he or she makes during a school board meeting, while debating a motion prior to a vote?

Let’s imagine that a City Councillor still holds a teaching license, but in the course of debating a bylaw at City Hall, says something that offends the teachers college. Should the College have the power to discipline him or her?

To use a slightly different analogy, what about an MP who holds a license to practice law? If during a heated debate in the House of Commons an MP were to say things that the law society who issued his license found “offensive”, should that regulatory body be allowed to strip the MP of his license?

The suggestion that the OCT has legitimate authority to do this to Trustee Del Grande is rendered even more ridiculous by the fact that he was not teaching students in a classroom. Rather, he was speaking at a meeting of the Board of Trustees.  Making it more absurd still, Del Grande does not have a teaching contract, nor has he ever worked as a teacher!

“The object of the Act governing the teachers college is to regulate the profession of teaching... but the facts show that it is being extended to regulate the conduct of elected school board trustees”.

During the live streamed hearing, Dr. Lugosi listed a number of serious defects in the College’s case against Trustee Del Grande.

Lugosi pointed out that the list of complainants is “vague”. The person who actually filed the complaint was a pro-gay activist named Kevin Welbes Godin, a gentleman who is known for conducting “2SLGBTQI+ workshops” at Catholic schools. 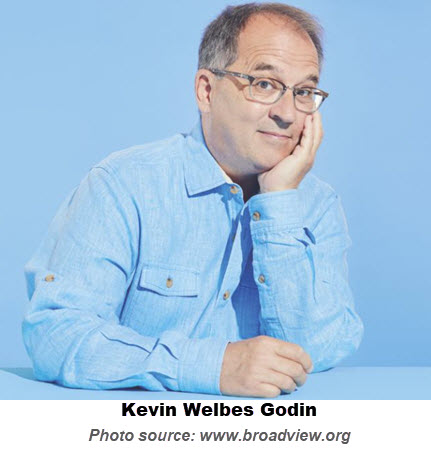 Oddly however, Godin will not testify. Nor did he bother to attend the hearing. Nor was he a participant in the school board trustee debates which gave rise to his complaint.

Instead his complaint was written in such a way that it seeks redress on behalf of unknown, unidentified “members of the LGBT community” who, supposedly, were offended by Del Grande’s speech at the board meeting.

Another part of Godin’s complaint was over Trustee Del Grande’s interaction at a previous board meeting with a student trustee who had expressed a pro-abortion position during the meeting, and who objected to showing a pro-life movie at Catholic schools called Unplanned.

Del Grande had attempted to discuss with her the fact that the Catholic Church teaches that abortion is not morally permissible, and she apparently got upset about it. The student trustee herself never filed any complaint with the College. However, the pro-gay activist, Mr. Godin, who was not a party to the conversation between the two trustees, did file a complaint!

This is bizarre. To me, it looks like a vengeful abuse of process on the part of a complainant who has no genuine standing in the matter.

Dr. Lugosi told the tribunal that his review of the documentation found that:

“No reasons were provided by the College’s Investigation Committee when it referred the complaint to the next stage, which was sending it to the Discipline Committee”.

In laymen’s terms, the committee believed there was enough evidence that Del Grande was “guilty” of "teacher misconduct" to warrant a Discipline Committee hearing, but gave no reasons to justify the decision.

Dr. Lugosi made the further point that the Investigation Committee’s mere recitation of the statutory criteria to be considered does not meet the legal test to provide meaningful, cogent, and detailed reasons for review.

3. College only interviewed witnesses for one side

Del Grande’s legal counsel raised a serious issue of Administrative Law principles that was not being respected in this hearing. That is, the College’s investigators only interviewed witnesses supplied by the complainant. Not a single person on the witness list provided by the defendent was interviewed.

“Does this taint the proceedings?”, Lugosi asked the judicial panel.

There are at least five more hearing dates set aside to continue the trial and hear witness testimonies for both sides: January 24, February 22, April 11-12, and May 2.

Please pray that Mike Del Grande’s legal counsel will continue to present powerful arguments in cross-examination and witness testimonies, and that ultimately, God will vindicate the faithful Catholic Trustee.

Mike is enduring a lot of persecution and prosecution in order to defend Catholic moral teaching, parental rights, and our children's eternal souls.

We wish to thank everyone who has donated to Mike's legal defense fund! Without you, Mike wouldn't have the ability to fight.

However, we're still short $72,000 of the $200,000 crowdfunding goal we set to cover the two separate legal battles Mike is in over his opposition to Gender Ideology. Aside from this OCT hearing, Mike's in the midst of a separate court case involving persecution he's suffering at the hands of his fellow trustees for the same issue.

Would you be able to help again, or for the first time if you haven't donated yet?

You can donate to his legal defense fund by clicking here.

P.S. I was interviewed by Rebel News about the OCT hearing. Watch it here.