One element of our Defund Abortion initiative in Ontario is a petition campaign which has gathered over 25,000 signatures to date.

Taxpayers who disagree with their money being spent to finance abortions are gathering signatures and then presenting the petition to their MPPs.

On June 11, 2013 the Liberal MPP for Ajax-Pickering, Mr. Joe Dickson, tabled a defund abortion petition to the assembled legislature in Queen's Park, at the behest of constituents.  The government is required to respond to each petition in writing and sends a copy to the MPP.

The person who gathered those particular signatures followed up with MPP Dickson and requested a copy of the government’s response, which she forwarded to CLC.

The response was written by Health Minister Deb Matthews, who is supposed to be an expert in how the province’s healthcare system works.  This letter proves that Deb is clueless about how elective abortion is treated within Ontario’s health care system.

Below is a copy of the Health Minister’s response to the MPP. Following after that, is my email reply to Deb Matthews (and the constituent), which aimed to correct her factual errors and educate her on how the world really works. 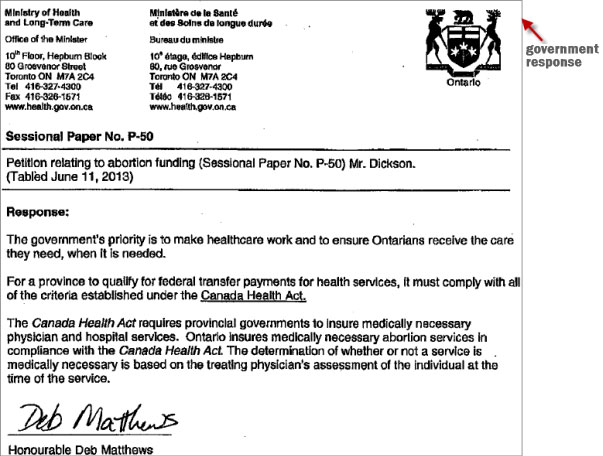 Minister Deb Matthews’ response reveals considerable ignorance of the facts surrounding elective abortion. I have taken the liberty of cc’ing the Minister so as to inform her of those facts.

First of all, there is often no "treating physician" involved. An example is the very common scenario where people schedule abortions directly with the abortion facility, without first seeing a doctor.  That happens every single day.  In Canada, there is no legal requirement whatsoever for women to obtain a referral from a doctor before aborting her child. That seems to be what Minister Matthews implied in her letter, but it's erroneous.

It is often the case that the first time the pregnant woman will ever meet a doctor, is when she’s lying on the operating table and the abortionist walks into the room. The abortionist is not there to “assess” whether the procedure is “medically necessary”, as Minister Matthews put it. He’s there to kill the baby - on the spot.

And even in cases where a pregnant woman sees a doctor, the latter doesn't make any attempt to assess whether an abortion is "medically necessary".  In the government’s response, the Health Minister falsely implied they do. If a person requests an abortion for any reason, including as back- up birth control, they get it. Pure and simple. This is with the exception of when dealing with a pro-life doctor who might refuse to refer for reasons of conscience.

The Hon. Deb Matthews also implied that there is such a thing as a "medically necessary" abortion, however, no such animal exists. In 2012, an international symposium of more than 140 obstetricians and maternal care experts signed a statement called the Dublin declaration, which stated unequivocally that in this day and age, there exists no health problem which requires an abortion in order to save the mother's life. Technology and modern medicine allow doctors to carefully manage all serious or potentially life-threatening conditions so as to protect mother and child, without recourse to abortion*.

Keep up the good work and keep engaging with your elected officials!

*Note: Politicians will sometimes cite a “life of the mother” exception for abortion, such as in the case of an ectopic pregnancy where the baby implanted in the fallopian tube.  In those cases, the mother's life is endangered by the possibility of the fallopian tube rupturing as the child grows, causing the death of  mother and the child.  In those situations, removal of the portion of the fallopian tube which has become pathological(i.e. diseased) to protect the mother's life is not a direct killing of the unborn child within the tube. It is considered treatment of the mother and is NOT an abortion. Similarly, when a pregnant woman is discovered to have cancer and is treated for that cancer with radiation and/or chemotherapy, the possible resulting death of her unborn child is NOT considered an abortion. That is because the measures are directly intended to treat the mother and NOT to kill her unborn child.

Comments
By: Nancy Cosgrove
November 26, 2013 @ 3:07am
Great response. Plain and simple. Good grief! Most Canadians, including political "leaders" and I use that term loosely are , in total disconnect on this the most critical human rights issue of our times. I have been wanting to get the contacts at our hospital to see if there is anyone who counsels women pre-abortion. Talk about tighter than Fort Knox. This is the biggest secret in our city...probably, in our country. Seeing in your post that there is no counselling that you know of in your experience, I am appalled but not surprised.
By: John A. Ward
January 8, 2014 @ 11:07am
The great schism is between science as god and God.
Science, and its blind adherents, are winning. We do not deny the many benefits of science; however, faith in science is faith in technology that only postpones the inevitability of death. The achievements of science blinds us to our ultimate destination.
Because of this, politicians are afraid to go against popular sentiment. We have to change this bent. Politicians, to stay elected, have to go with the flow. The resurrection of Christianity and Christian principles is where we have to win. Dawkins, Hitchens, and Krause embody the current ethos. They are delighted with their cleverness, ignoring that the death of God is the birth of innumerable evils.
Does anyone really want the rebirth of a Hitler, Stalin, Pol Pot, and Mao. Even the Chinese don't want this.
Abortion, euthanasia, concentration camps, are where we are heading, yet again.
The defeat of Christianity in the western world will cause the fall of civilization, just as the rise of Christianity caused the rise of civilisation. What would America have achieved without the protestant ethic.