Conscience rights of doctors in jeopardy

Earlier this year, a ruckus broke out when three Ottawa doctors refused to prescribe artificial birth control based on their religious and moral beliefs.  National media outlets pounced on them, alleging they were discriminating against women.

On the heels of this controversy, the College of Physicians & Surgeons of Ontario (CPSO) announced last month a review of its Ontario Human Rights Code policy. Specifically, it will review its current policy which allows doctors to refuse to provide services or procedures that violate their religious or moral beliefs. 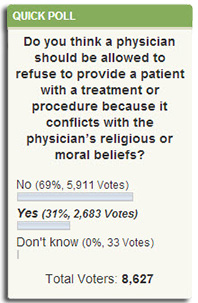 On the College webpage announcing this policy review, it's even running an online poll asking people whether they believe a physician should be allowed to follow his conscience. Obviously, the CPSO will be considering the results of this poll in its decision. As of this writing, the NO side is winning. Please visit the poll and vote YES.

The College is also inviting the public to provide input on the policy up until August 5th. After that, it will make its decision.

The suggestion that CPSO may change its policy so as to erase the right to refuse to prescribe the birth control pill based on a doctor's religious or moral beliefs is alarming. Please also note that this question is not limited to birth control, but would seem to cover all procedures to which religious believers may conscientiously object. Freedom of religion and conscience are fundamental human rights that cannot be limited to non-doctors.

Many Christians, Jews, Muslims and people from other faiths believe that frustrating God’s plan for procreation is a sin. Many physicians also understand that the contraceptive pill sometimes acts as an abortifacient by thinning out the uterine lining. This prevents an embryonic child that was already conceived prior to the pill being taken from being able to implant him/herself in the uterine lining.

By the way, this isn’t a “theory”, but a fact that’s admitted on the manufacturer’s info sheet that comes with the birth control pill.  Below is an excerpt from the YAZ pill instruction sheet describing how it “prevents” pregnancy.

Asking a Catholic doctor for example, to refer for a drug which may cause abortion, directly interferes with a core religious belief of that physician.  One cannot honestly argue that this is only an indirect or minor interference with the doctor’s moral or religious convictions.  It does not matter that those who direct CPSO disagree with this conviction. It only matters that the physician’s belief is sincere and he/she considers prescribing it to be an undue hardship. Neither the College nor the provincial human rights apparatus should require a doctor to participate in what he/she considers to be a moral evil that would be damaging to their own soul, and to the soul and medical health of the patient.

I find it absurd for anyone to suggest that refusing to prescribe the pill corresponds to any of the prohibited grounds for discrimination (race, age, colour, sex, sex orientation, religion).  The decision to take the pill for contraceptive purposes is a lifestyle choice, plain and simple. It’s not an innate or essential characteristic of being a woman.

In its current policy the College warns doctors that the Human Rights Tribunal will balance the religious freedom right with equality rights. I would say the status quo already provides a more than adequate balance. Doctors have conscience rights. Those patients who want contraception can very easily obtain it from any number of other doctors or clinics.

Contraception isn’t medically necessary. It does not treat an illness. Pregnancy is a natural, healthy part of sexual relations, and not a disease that needs to cured. In fact, full term pregnancy, especially at an early age, has been shown to reduce the risk of breast cancer. This naturally occurs through the maturation of cancer-vulnerable breast lobules which, during the last 8 weeks of a full-term pregnancy, convert into cancer-resistant lobules. Here's a physiological explanation for this process. In so far as the contraceptive lifestyle delays childbirth, it therefore causes women to lose the protective effect of childbearing against breast cancer. It’s noteworthy that the World Health Organization warned in a 1995 press release that combined oral contraceptives are a Group 1 carcinogen. Why aren't women being told?

Here's the truth. The pill is an unnatural chemical concoction that can cause both major and minor health risks for women including blood clots, high blood pressure, stroke, heart attack, fatigue, weight gain, mood swings and reduced libido. As an example, read the YAZ pill’s own warning label.

On the basis of these health risks alone, doctors have the right to refuse prescribing contraceptives.  I would go further and say that a truly conscientious physician ought to feel an obligation to avoid the contraceptive pill. Forcing doctors to do so would be analogous to a physician being required to refer a 12-year old girl for silicone breast implants just because she asked for it, even though the doctor knows it could be harmful to her.  Should the lifestyle desires of patients trump a doctor’s obligation to do what is best for her?

The pill is no more a “medical treatment” for pregnancy than breast implants are a medical treatment for having a smaller chest than one would desire for cosmetic appeal. Both are lifestyle choice decisions, although the former carries a significant moral quandary.

Even in its current policy, the College offered a poor defense of religious freedom when it suggested that doctors have a right to hold a religious belief but not to act on it.   Nonsensical. That’s like making the claim that journalists would still possess the right to freedom of the press if a regulation were passed limiting criticism of the government to private conversations, but not publicly in the pages of a newspaper. Goodbye free speech! In both scenarios, the fundamental right is not merely curtailed. It's destroyed. 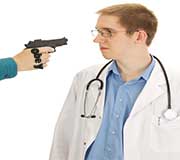 If doctors are forced to violate their consciences in this way, we will eventually see physicians, nurses, anesthetists, medical students and others involved in the healthcare system forced to participate in other practices that violate their religious beliefs. That includes committing or referring for abortions. If Criminal Code prohibitions against euthanasia get overturned in the future, medical practitioners and others who work in the health care system will also be forced to participate in that form of homicide.

How serious is the threat of a policy change by CPSO? Well, it could result in the college stripping doctors licenses from those who conscientiously object to participating with contraception, the morning after pill, abortions, sterilizations and in the future, euthanasia. In essence, this is a move that could effectively ban people of faith from a career in medicine. That’s how serious a threat it is.

How about the effect on patients and medicine overall? Is it dangerous for the health care system to ask health care professionals to set aside their morals?

Absolutely.  If the healthcare system conditions medical students and physicians to set aside their morals when it comes to violating their consciences, this will inexorably expand to setting aside morals in other areas too. Having a strong moral code is essential. I submit that generally speaking, those who hold fast to Judeo-Christian moral principles will also be more likely to remain ethically upstanding in other areas. For instance, avoiding the temptation to engage romantically with their patients. Or avoiding the temptation to pad one’s pockets by over-billing the taxpayer funded, provincial healthcare system. Or not working with full vigour to help patients for whom you personally don’t have a great deal of respect.

If the College changes its policy, I believe it will gut the medical profession of doctors who adhere to their own conscience, thus creating a more dishonest, less compassionate and more dangerous profession.

To submit your feedback to the College, click here.

To vote YES in the online poll, click here.