Social conservatives propelled Doug Ford to victory. And he still needs us to beat Kathleen Wynne.

Doug Ford won the PC leadership on Saturday by a razor-thin margin, beating the pro-abortion and pro-transgender ideology Christine Elliott by a mere 1.2% on the final ballot. Ford ended up with 50.6 per cent of electoral votes to Elliott’s 49.4 per cent.

It has been almost universally acknowledged by the mainstream media that the social conservative vote was the key factor which crowned him king. That’s indisputable based on analysis of the numbers.

Tanya Granic Allen won 15.3% of the electoral votes on the first ballot, barely behind Mulroney’s 17.2%, wildly exceeding expectations of those who labelled her a “one-issue” or “fringe” candidate.

On the first ballot, Doug Ford was in second place, a little behind Elliott. But once Tanya dropped off, she catapulted him into first. An incredible 83% of her second ballot support went to Ford. And there Ford Nation stayed until the final ballot, moving him one step closer to the Premier’s office.

Tanya’s bold campaigning on parental rights and unapologetic stance as a pro-life candidate motivated social conservatives to get involved and put their ten bucks where their mouths were.

When Ford then promised to repeal the child-abusive, Liberal sex ed curriculum, and made positive overtures to pro-lifers, it became an easy sell for social conservatives to rank Ford #2.

CLC had a record impact on the leadership race

Campaign Life Coalition recruited more than 9,000 PC members to support Tanya as the #1 ballot choice and Doug Ford as #2.  That’s at least 50% more members than the 6,000 we recruited in 2015 in support of Monte McNaughton and the formerly pro-life Patrick Brown.

Virtually all of that second ballot support went to Ford. That, combined with Tanya’s incredible performance is undeniably what put Ford in the Leader’s chair.

We estimate that approximately 1,200 of those CLC supporter-members were cheated of their right to vote because the party did not send out their verification codes and/or ballots.  Therefore our supporters alone accounted for roughly 12% of the 64,053 votes cast.

There are many who believe that some of the remaining Brown loyalists in the party establishment withheld verification letters from members suspected of not supporting Elliott.

And if that’s true, it means Ford would have won by an even greater margin if every member had been allowed to vote, because the pro-life/pro-family effect would have been even more pronounced.

The numbers show that without social conservatives, Ford would almost certainly be runner-up and Christine Elliot would be Leader.  I’d bet a lot of money that even today, newspapers would be filled with stories about how Elliott had already started walking back the overtures she made to pro-life and pro-family voters.

Fiscal conservatives too, should be grateful for the socon effect. I truly believe it would not have taken much longer for Elliott to start walking back her opposition to carbon taxes.

Mind-molding media elites trying to separate Ford from his base

For decades, the biased, left-wing media has successfully used its bully pulpit and fake news stories to steer conservative politicians into believing they can only win if they agree to play in a leftist sandbox with respect to public policy, and especially moral issues.

Liberal reporters, citing “expert opinions” from leftist consultants, pollsters and academics, strategically spit out torrents of op-eds which present as doctrinal fact, the unsubstantiated narrative that any politician or party whose platform includes pro-life and pro-family values will lose the general election.

That propaganda machine has already been revved up by many in the media, with the goal of scaring Doug Ford into abandoning the socially conservative campaign promises he made with respect to sex-ed and parental notification for parents of minor children seeking abortion.

Here’s an example from the Toronto Star’s Samantha Beattie on March 12th:

Bozinoff warned that Ford’s socially conservative leadership campaign rhetoric (on the subject of abortion, for example) could cause trouble for the party later on.

“We know in the past, you need to be centre (on the political spectrum) to win Ontario,” he said.

Really? How do "we know" for a fact that you have to embrace liberal social policy in order to win a general election?

How can you claim such a thing when no major provincial party has tried running an election campaign with a socially conservative platform? It would seem to be an untested thing. All we’ve had for years is conservative party leaders heading into elections embracing liberalism, and coincidentally, having their hats handed to them.

How can you claim such a thing in the face of the voter turnout ratio dropping with each election? Might it not be the case that the pathetic voter turnout ratio of around 50% in Ontario’s recent years is the result of religious voters staying home because they no longer see a difference between PCs,  Liberals and the NDPers?

In fact, federal election results provide some evidence to counter the left’s version of accepted wisdom. For a brief period leading up to the 2006 election when the federal Conservatives ran on a platform that featured the defense of traditional marriage, it helped them win a minority government from the Paul Martin Liberals who imposed homosexual marriage on a then unwilling public.

Over the next couple of elections, this identification of the Conservatives as “the party of family values” culminated in a 2011 majority for Harper.

Polling numbers showed at the time that Harper’s majority Conservatives were victorious because they won the key voting blocs of Catholics and visible minorities away from the Liberals.

Even Liberal MP John McKay, who was tasked with trying to regain the Catholic vote in 2011, conceded at the time that the party alienated Catholics when the Paul Martin Liberals legalized homosexual marriage in 2005 and demonized traditional marriage supporters as “unenlightened”.

The Catholic vote - previously owned by Liberals - dropped by 38 points from 54% supporting Liberals in 2000(1), to just 16% in 2011(2). Over the subsequent years, Conservatives were the main beneficiaries of the Catholic defection.

Throwing away the key to success?

Is it a coincidence that these key voting blocs went back to the Liberals after Harper himself came out as strongly pro-abortion, even whipping his caucus to vote against MP Stephen Woodworth’s pro-life motion 312, and shutting down MP Mark Warawa’s motion against sex-selective abortions?

You see – Harper’s problem was that despite being portrayed as combative with reporters, he allowed himself to be led around by the nose by leftist opinion columnists who warned he couldn’t win unless he put to rest fears of his “hidden agenda” on abortion.

The fact of the matter is that Harper, like so many alleged “Conservatives” played into the media’s trap of alienating them from a major segment of their party’s natural base, i.e. social conservatives.

And “we know” that without your base, you can’t win an election.

The Ontario Liberals have been counted out by the opposition PCs for several elections in a row, comforted as they were by a big lead in the polls over the scandal-plagued Liberals, just as exists today,  heading into the election. Those leads evaporated at the last minute as McGuinty and Wynne made surprise come-backs

Past PC Party Leaders felt no need to nurture or keep motivated the “values voters” and pro-lifers who, according to CLC’s calculations, make up 40% to 70% of the PC Party’s natural base.

Offered nothing in the PC platform by John Tory or Tim Hudak except scorn, a huge segment of the party’s pro-life & pro-family base stopped recruiting relatives and friends to vote, and stayed home on election day themselves, contributing in large part to McGuinty and Wynne’s comebacks.

They overlook that Tory himself pledged that any such funding would come with strings attached for the faith communities who wanted the cash, thus making it entirely unappealing.

As Leader, Tory also marched in the gay pride parade, boasted of his support for abortion and other “progressive” values, which was a total turnoff.

If Ford hopes to win against Wynne, with a coalition of every type of conservative, I would advise him to stand by his moderate campaign promises to:

Not only are these policies that the majority of Ontarians will view as quite reasonable and common sense, but they’ll ensure that Campaign Life Coalition’s 9,000+ supporters who became PC members (plus Tanya’s many supporters of course) stay engaged in the general election leading up to June 7th.

They’ll become an army of volunteers, recruiting other disaffected voters from amongst that 50% who've sat out elections for years – let’s call them "the forgotten man” - to join Ford Nation and the PC Party at the ballot box on June 7th.

They’ll install lawn signs. They’ll staff campaign offices. They’ll donate, make phone calls, and leaflet neighborhoods.  They’ll recruit new voters from their places of worship and drag out elderly Aunt Lucy and Uncle Bob to the voting booth.  They’ll do all the things that a campaign needs to win.

We’re already seeing evidence of this, with Muslim communities in Toronto enthusiastically celebrating Ford’s victory, and campaigning for the defeat of Kathleen Wynne. 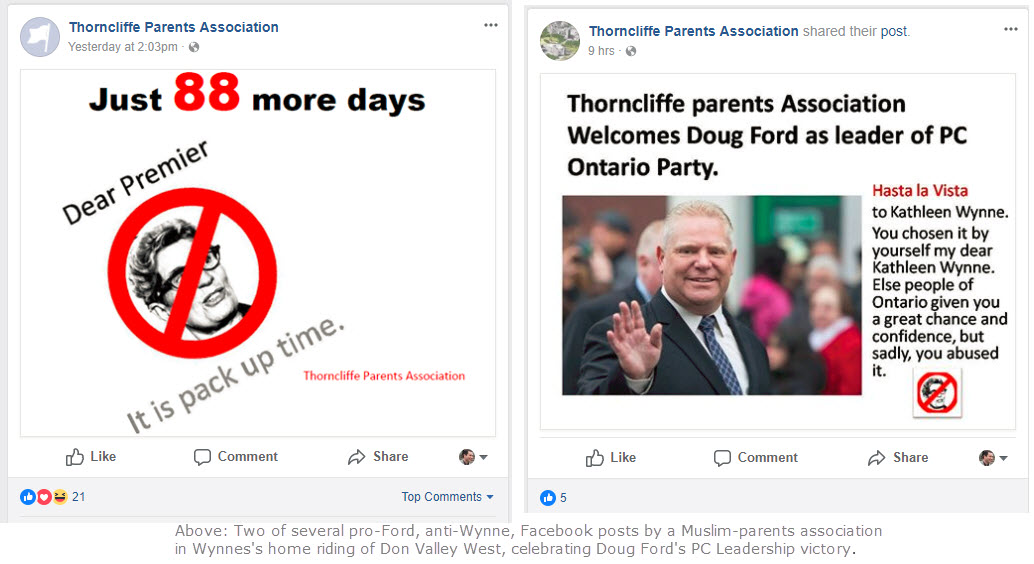 This muslim community is an example of the type of new immigrants and visible minority voters that the Doug Ford PC's can win over with socially conservative policies. In fact, to be assured of election victory, the PCs must win over new Canadians, and they can do so because those immigrant voters come from countries that are overwhelmingly social conservative in their world view. Contrary to what the liberal "experts" claim, appealing to social conservatives is a recipe for victory in capturing this increasingly important voting bloc.

But…. if Ford were to commit the folly of listening to the pied piper liberal media, and to abandon the campaign promises made to the very people who handed him his leadership, Kathleen Wynne could easily make another surprise comeback on June 7th.