By what authority do flags fly?

In past years, when being suddenly and unexpectedly confronted with a "foreign flag" waving from the flag pole of our Elliot Lake City Hall, a flag that is neither the Union Jack nor our Canadian flag, and one having no relation to me as a Canadian citizen, I'm led to ponder and seriously question the rationale behind the phenomenon. As an Elliot Lake resident of more than a dozen years, my thoughts go to who it was that raised this flag, by what authority, and why.

To the best of my knowledge, a flag is meant to reflect and convey the patriotic sentiments of its citizens. This criterion is by no means met in the raising of the GAY PRIDE flag over a city. It is a great hypocrisy when the moral convictions of a vast segment of a city's citizens is either swept aside, ignored, or left unconsidered in order to foist a flag promoting the convictions of a few. Beyond this fact exists the glaring reality that moral convictions and beliefs, when joined, supposedly, to civic policies and patriotism are not respectful of the separation of church and state.

It is only just that the flying of a flag over any City Hall reflect the sentiments and moral values of a city's residents as a whole, not simply of a select few. The decision to publicly fly a flag with a non-patriotic message and statement over a city is first of all a declaration of a set of moral convictions when it carries such within it. As such, it is tantamount to the attempt of establishing a new moral code and the equivalent of declaring a new "state religion". Is this what the residents of our Canadian cities are to assume is the message being transmitted to the public when the Gay Pride flag is flown over our City Halls? 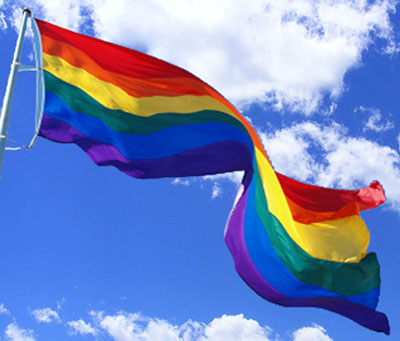 Sharon McGonegal is a CLC supporter who lives in Elliott Lake, Ontario. If you’d like us to consider post your own guest blog on pro-life and pro-family issues, please send us an email. Please note that CLC reserves the right to edit submissions, or to decline them if not entirely part of its mandate or in keeping with our organizational mandate.