Observing the International Day of Families at the UN

On May 15th, pro-life and pro-family organizations and delegates gathered at the United Nations Headquarters in New York City to observe the 25th Anniversary of the International Day of Families and to commemorate the 25th Anniversary of the International Year of the Family. Campaign Life Coalition attended the event and delivered a three-minute intervention.

Organized by C-FAM and Family Watch international, the High-Level Event was sponsored by the Group of the Friends of the Family, “a coalition of UN Member States that reaffirm that the family is the natural and fundamental group unit of society and is entitled to protection by society and the State.” The event was co-sponsored by almost 20 different civil society organizations working to protect the family throughout the world, including Campaign Life Coalition. 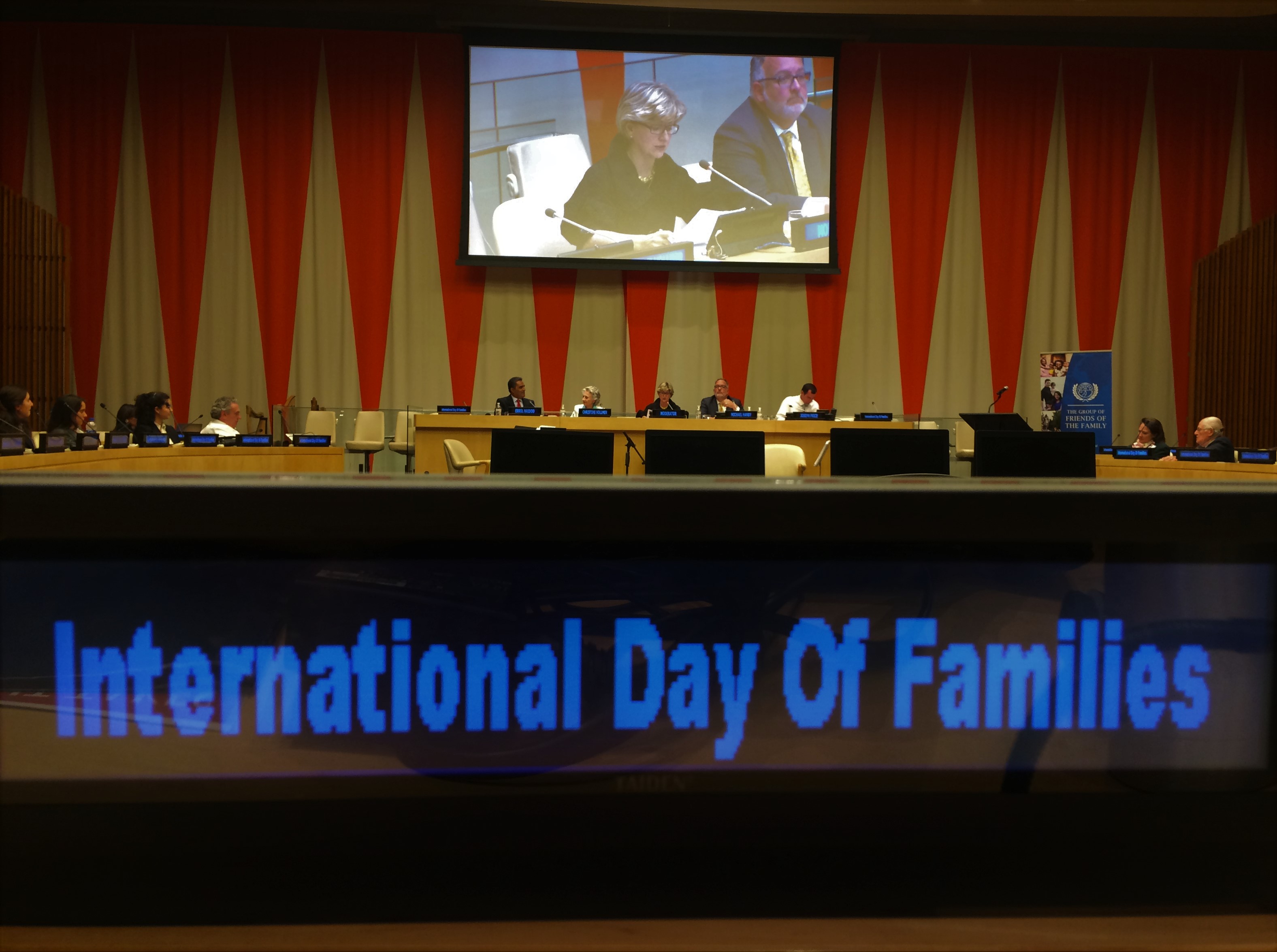 Valerie Huber, Senior Policy Advisor for the Office of Global Affairs at the U.S. Department of Health and Human Services (HHS), noted that the first annual observance of the International Day of Families in 1994 preceded the 50th celebration of the signing of the United Nations Charter. She indicated that this “specific placement can be seen as an important and symbolic acknowledgment that the success of the mission of the United Nations, a family of nations, is linked to the wellbeing and strength of the family unit.” She went on to state that “the United Nations was simply stating the obvious truth when it said, 25 years ago, that families are the major agents of sustainable development at all levels of society and their contributions to that process is crucial to its success.”

Msgr. Tomasz Grysa, First Counselor and Deputy Permanent Observer of the Holy See to the United Nations reflected on the close relationship between family and peace, especially recognizing the family as a builder of peace, a victim of the lack of peace, and an agent for peace and at the service of peace. He remarked that “in our troubled world, the contribution that the family can offer in preserving peace and promoting development” is significant. The family plays a key role in securing a future of peace through its role in shaping the identity of children. Commenting on the connection between the two – identity and a future of peace – he claimed that the family contributes to the future of peace, “…in the first place, through the mutual love of married couples, called to full and complete communion of life by marriage and its natural meaning. And then through the efforts of parents to carry out properly their task as educators, committed to training their children to respect the dignity of every person and the values of peace.” He concluded his statement saying that, “Without peace in the home, there will be no peace on earth.”

Errol Naidoo, Founder and CEO of the Family Policy Institute (FPI), began by saying that “there are mountains of evidence that indicate family breakdown lies at the root of almost every social ill currently plaguing African Society.” Any attempts to improve African society must start with the restoration of the family for, “dysfunctional families, produce dysfunctional people. This in turn contributes to dysfunctional societies.” If the family, as the foundation of society, is not strengthened and supported, then all subsequent building efforts are rendered futile.

Campaign Life Coalition also had the opportunity to deliver a three-minute intervention at the event. We recognized the family as the “basic unit of society and [that] as the family goes, so goes the nation.” Furthermore, we spoke of the “tragic reality that there are so many development programs, backed by very powerful organizations and governments with abundant resources, that appear to be directly aimed at redefining the family unit, which ideally consists of a mother, father and children.” Finally, drawing upon the wisdom of Pope John Paul II, we underscored the effects of utilitarianism. Creating a “civilization of production and use, a civilization of ‘things’ and not of ‘persons,’” it is no wonder that utilitarianism has produced a society in which “women are treated as objects, children as a hindrance, and the family institution as an obstruction to the freedom of its members.”

Our full statement, as well as the video of our delivery of it at the UN, can be found below.

Campaign Life Coalition is a national, non-profit organization, involved in political action and advocacy for legal and cultural change in Canada with respect to protecting human life, at every stage of development. It is an honour to be here among you to celebrate the International Day of the Family.

Every civilization is built upon families. They are the basic unit of society and as the family goes, so goes the nation. Therefore, if, in addition to achieving the sustainable development goals, we are to create a civilization of love that cares for the most vulnerable among us, our first priority must be the well-being and empowerment of the natural family unit.

It is a tragic reality that there are so many development programs, backed by very powerful organizations and governments with abundant resources, that appear to be directly aimed at redefining the family unit, which ideally consists of a mother, father and children. They go so far as to glamorize familial situations that are recognizably irregular. The ideologies of these movements often run in direct opposition to the moral and cultural traditions of the world.

Describing the growing proliferation of utilitarianism in the West, Pope John Paul II in his Letter to Families, described utilitarianism as a “civilization of production and of use, a civilization of ‘things’ and not of ‘persons’, a civilization in which persons are used in the same way as things are used.” The Pope went on to state that within this context, it is no surprise that women are treated as objects, children as a hindrance, and the family institution as an obstruction to the freedom of its members.

On this commemoration of the 25th anniversary of the year of the family, we call upon all present, Nations States and Civil Society alike, to join Campaign Life Coalition in our shared objectives to:

Thank you for your time.