Why is Rizzo pretending to be a faithful Catholic trustee?

It seems that common sense is just not so common these days!

What do you think? If someone wants to serve as a school board trustee in a Catholic school system, shouldn’t that person actually have some interest in maintaining Catholic values? At the very least, you’d never expect such a person to actively oppose Catholic values, right? And you’d certainly never expect that person to push some trendy new ideology that is totally alien to Christianity – an ideology that will put over 90,000 students at risk of both spiritual and physical harm.

You’d never think it could happen – not in a million years! But it is happening.

Maria Rizzo is that “Catholic” school board trustee. In fact, she is the chairperson of the entire Board of Trustees for the Toronto Catholic District School Board!

Just last week there was a vote in the Board’s “Living Our Catholic Values” subcommittee. The issue was Transgenderism. And I should point out that this particular issue is being fiercely pushed on Catholic schools from the outside – from pro-LGBT politicians and powerful voices in the leftist media. Those outside forces are demanding that “gender identity” and “gender expression” be incorporated into the official school board Code of Conduct.

And guess who is pushing for these very same things from the inside? Maria Rizzo is leading the charge from within, crusading against traditional Catholic values.

It is very important we understand what the terms “gender identity” and “gender expression” represent. These terms are catchphrases for Transgenderism. They are used to promote the new and dangerous notion that “there is no such thing as girls and boys... girls are not real and boys are not real” (taken from an Ottawa-area public school teacher’s grade one lesson).

Furthermore, it flies in the face of God’s design for mankind, undermining belief in that design, and subverting faith in God the Designer. Despite being completely at odds with biology, physiology, genetics, and basic common sense, Gender Theory has become all the rage, as secular society revels in yet one more way to dismiss God.

And Maria Rizzo seems to be perfectly fine with all this nonsense – all this evil!

In the vote last week (on October 30th), four out of five trustees on the Catholic Values subcommittee wisely decided to oppose Gender Ideology. Rather, they chose to endorse a reasonable, grace-filled, biblical statement:

“That all members of the TCDSB community shall respect and treat others fairly, as children of God, created in the image and likeness of God and are of infinite dignity and value.”

Who could object to that? Only one person – Maria Rizzo.

The problem is, now, this win against Transgenderism still needs to be ratified. There will be at least one more vote. Things could change at that vote. And the fact is that Maria Rizzo will undoubtedly be relentless in her efforts leading up to that vote to ensure Gender Theory is imposed and traditional Christian values are eviscerated.

That is why we are calling on Ms. Rizzo to renounce her aberrant views on transgenderism OR resign from her position as a “Catholic” trustee. As trustee and board chairperson, Ms. Rizzo holds a position of high responsibility and trust. She cannot maintain that trust while actively working to undermine the fundamental values and beliefs that she is duty-bound to protect. In good conscience, she needs to do the right thing and resign (or repent).

Yesterday, I travelled to the Toronto Catholic District School Board headquarters in Toronto to deliver a petition signed by 1,021 concerned citizens. In that petition, we are calling on Maria Rizzo to “renounce or resign”. Unfortunately, staff at the Board refused to meet with me in person and instructed me to leave the petition at the security desk. 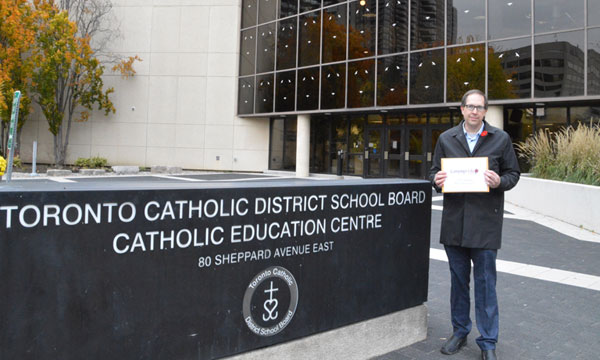 We are hoping that this petition, with over a thousand signatures and scores of personal comments, will make a big impression. We are hoping and praying that God will use it to speak to Ms. Rizzo’s heart and cause her to reconsider her anti-Christian, pro-LGBT advocacy within Toronto’s Catholic school system.

If you have not already signed our petition, you can do so by clicking the button below.

We will continue to compile signatures and work to bring even greater pressure to bear on Maria Rizzo.

We are also asking concerned citizens, parents, and stakeholders to reach out to ALL TCDSB trustees, demanding that they vote to defend our kids at the next vote. You can easily send an Action Alert Email by clicking the button below.

Barring any changes, the next vote is scheduled for December 5th.

However, our friends at PAFE have found out there’s a chance that certain procedural tricks may get triggered so that the Gender Identity/Expression vote gets called at tonight’s meeting of the “Student Achievement Subcommittee”.  That meeting will begin at 7:00pm tonight, located at the Catholic Education Centre, (2nd Floor), 80 Sheppard Ave East, Toronto, ON, M2N 6E8.

Even though you may receive this email after the meeting has begun, if you live close enough to drive there, please consider attending that meeting to show moral support for the “good” trustees, just in case the vote gets called. These meetings tend to be 3 hours long and the vote may not come up until later in the meeting, if it gets triggered at all.