Did you know that Nova Scotia taxpayers currently shell out over $2 million annually for the elective abortion procedure alone? That price tag excludes the cost of abortion complications such as perforations, sepsis, uterine hemorrhage, infertility, breast cancer, post- traumatic stress disorder and suicide. All these indirect costs could easily escalate the total cost of abortion in our health care system to tens of millions of dollars annually!

For $2 million per year, Nova Scotia can hire 10 family doctors or 34 nurses in communities facing a dire shortage. Or purchase one life -saving MRI machine every year. Or provide crucial therapy to 26 additional autistic children each year. All these uses of taxpayer dollars would represent genuine health care… rather than killing babies.

It’s ludicrous to ask us to open up our wallets for these killings when the province is drowning in debt, and genuine areas of
health care are neglected, such as treating autistic kids, fixing doctor and nurse shortages, improving elder care and buying MRI machines.

When Nova Scotia legislators deem an elective procedure as “not medically necessary” it does not get insured by the provincial health insurance plan. As a result, it will not receive public funding.

In 1997 for example, Nova Scotia’s politicians delisted optometry exams from provincial health insurance coverage with the stroke of a pen. A second example to illustrate the raw power MLAs have to to decide which procedures are covered by the taxpayer occurred just this summer. For years, the Nova Scotia government had deemed Sex Change Surgery to be “not medically necessary” and refused to fund it with taxpayer money. Under pressure from activists, Darryl Dexter’s NPD government reversed its prior stance and announced in June 2013 that it will begin forcing taxpayers to finance Sex Change Surgery, as a “medical necessity”.

Therefore, it is clear that Nova Scotia MLAs can easily delist abortion from the health insurance plan. What they lack is the political will and moral fortitude to do the right thing.

In almost all abortion cases, the life of the mother is not in danger. The simple truth is that more than 96% of the time, abortions today are performed for convenience, as a back-up birth control method. That’s clearly not a medical necessity and should not be funded as such.

On October 3, 2013, taxpayers will be gathering at the provincial legislature to demand that their elected representatives delist abortion from the services covered by taxpayers through Nova Scotia’s health insurance plan.

This is a growing movement. The Defund Abortion campaign is happening nationally, with participation by 6 other provinces including Alberta, Saskatchewan, Ontario, Quebec, Manitoba and Newfoundland. Join this taxpayer liberation movement today!

♦download a poster for your church or school:  8.5x11 or 11x17
♦download a 4-pg brochure to use as a handout, table-top display or bulletin insert
♦download a sample bulletin / pulpit announcement for your pastor 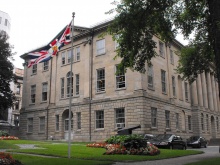 Thank you for pledging to attend this Defund Abortion Rally at Alberta’s legislature on Thursday October 3rd from 12noon-1:30pm.  We cannot succeed without you. In solidarity with Canadians in 7 provinces across Canada, we are making progress towards the day when taxpayers are no longer unjustly forced to pay for someone else’s choice to kill their baby.

Can you also help us promote this rally in your church or social circles? A poster that’s ideal for church bulletin boards can be downloaded here. You may also download a brochure here, which is perfect as a handout, table-top leave behind or bulletin insert. If you’d like us to mail you a quantity of professionally-printed, full colour posters or brochures, please email [email protected] or call 1-800-730-5358. You can also print off this sample bulletin announcement and ask your pastor if they would please include it in the bulletin each Sunday leading to October 3rd.

Finally, click here to spread the message to your friends by emailing them our Defund Abortion in Alberta web page. Note: if emailing multiple friends, please separate their email addresses with a comma.