Corpses and Cornerstones: When Freedom of Speech is Silenced

However, on October 24th, when Fr. Van Hee was charged by the police for “attempting to intimidate” those seeking access to abortion, he wasn’t carrying a pro-life sign or a “Choice” Chain placard or even a few pamphlets on adoption. Instead, while peacefully sitting outside of the Morgentaler Abortion Clinic in Ottawa, Fr. Van Hee was wearing two signs reading: 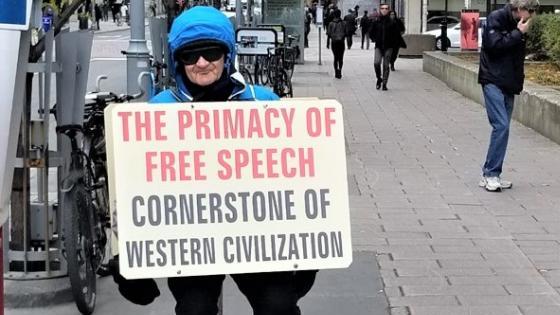 “Without Free Speech the State is a Corpse”

“The Primacy of Free speech: Cornerstone of Western Civilization”

In the most literal sense possible, an 83-year-old man was just arrested for defending free speech. Since when does a reportedly democratic country even require a defense of authentic free speech? How the country, as well as our Liberal government, will respond remains to be seen. However, one thing is for sure, if the political situation in Canada continues according to the status quo, Mr. Justin Trudeau will soon find himself to be the head of a corpse of a nation and a society without its key cornerstone. Although, that shouldn’t come as much of a surprise to Canadian’s considering that during his campaign, Trudeau openly admitted to maintaining a “level of admiration … for china” and their “basic dictatorship.”

In Canada, Ontario, British Columbia and Alberta all have some form of legal enforcement of abortion “safe zones.” According to the Ontario Safe Access to Abortion Services Act (Bill 163), no person is allowed to:

(b) inform or attempt to inform a person concerning issues related to abortion services, by any means, including oral, written or graphic means;

(c) perform or attempt to perform an act of disapproval concerning issues related to abortion services, by any means, including oral, written or graphic means;

The prohibitions listed above, along with a few others, are applicable within a 50-150 meter bubble zone around abortion facilities, and any hospital, clinic, office, or pharmacy that completes a successful application. The original list of prohibitions goes into greater detail, but these first three points give you an idea of exactly who the bill was targeting: The dissidents.

Canadian society already has laws in place to safeguard its citizens against things like intimidation or violence. Therefore, whatever the purpose of Bill 163, to say that it was for the protection of pro-choice Canadians from the so-called “wrath” of the pro-life populace is blatantly false. What was, and is, really at stake here, is the right to disagree with a powerful majority.

Henry Hyde, an American Politician, said it best when he said, “Free speech is meaningless unless it tolerates the speech that we hate.” And it’s obvious that the Liberals are not a fan of pro-life speech. From the abortion bubble zone laws, to the summer job attestation, to the Prime Minister’s refusal to condemn violence against peaceful pro-life protesters, the current government has made their position clear: “Free” speech and tolerance are only for a select few.

This court case is important. This is a real opportunity for both pro-life and non-pro-life citizens alike to unite in the defense of something that is valuable to them both.

If you or someone you know would like to support Fr. Van Hee, please do so at the link below: