Perspectives on the 2019 March for Life in Washington, D.C.

CLC Youth delegates hopped aboard a bus last week in order to attend the March for Life in Washington, D.C. They also took part in the pre-March rally, went sightseeing, and experienced the Students for Life of America Conference the following day. Below are the perspectives of five of the youth delegates. 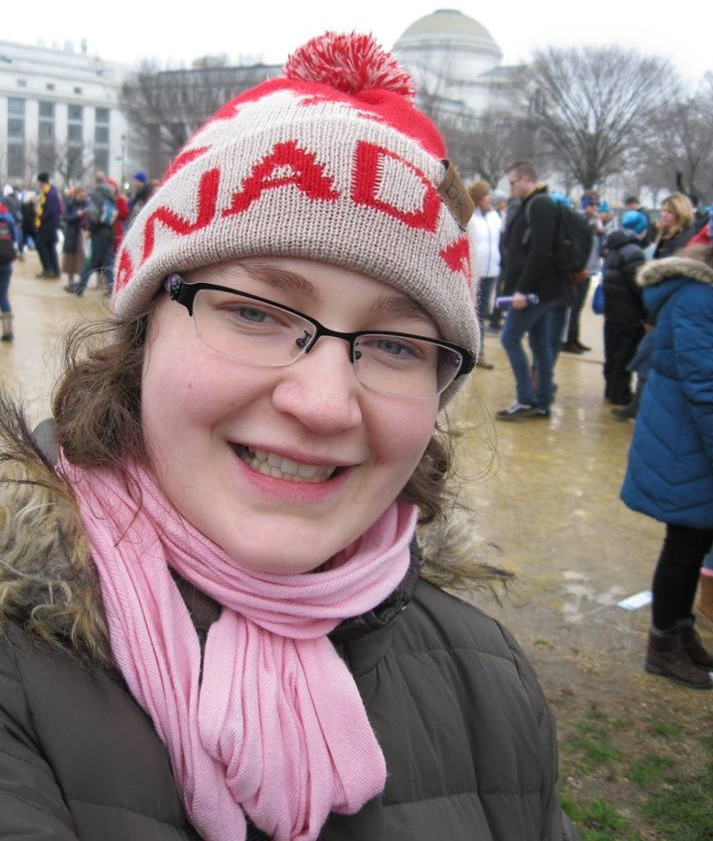 Going for the first time to the US, to the Washington DC March for Life and National Students for Life in America Conference, was a very memorable and wonderful experience for me. I offered this trip as a pilgrimage to God. As it turned out, that was an appropriate approach for me. Many joys were mixed with some significant sufferings. But God is never outdone in His generosity, and I feel the impact this trip had on me will continue to be a source of grace in my life. I made some new friends on this trip. The sight-seeing in Washington and visiting the Holocaust Museum were both very exciting and educational for me. I learned that the Congress building was not the White House! I started admiring American politicians for once, upon hearing Mike Pence and Donald Trump speak. It gave me new hope that there can be people in power who do what is right and will make a righteous impact on the world. Even though I had seen the large numbers of people at Ottawa's March for Life several times, being mixed in with the crowd of Americans gave me a different feel. I felt the strength that unity brings: unity between faiths, between ages, between countries, and between people of all walks of life. The Americans beamed so bright upon seeing the support from Canada, which caused me to see how important it is to fight the good fight together. It may sound funny, but I saw the humanity in a nation I did not quite grasp before. It was truly beautiful. Another highlight of the March was the marchers supporting us as we stood outside the Canadian Embassy cheering them on. It made me feel a bit like a celebrity. As one young American lady put it, "Are you real Canadians?"

Attending the student conference was a very effective way to solidify my pro-life conviction. The speakers were all interesting, educational and inspiring. I particularly enjoyed Stephanie Gray's logical and effective way of looking at and presenting pro-life arguments. The resources I got at the many booths are invaluable. I was particularly inspired by the workshop on adoption to learn more about the subject, and I received some good resources to do that. There is so much more I could say, but I will leave it at that. Pray that God shows me where He wants me to go with my renewed pro-life spirit. I am sincerely grateful to Him, those who organized the trip, and our sponsors for making it all possible. 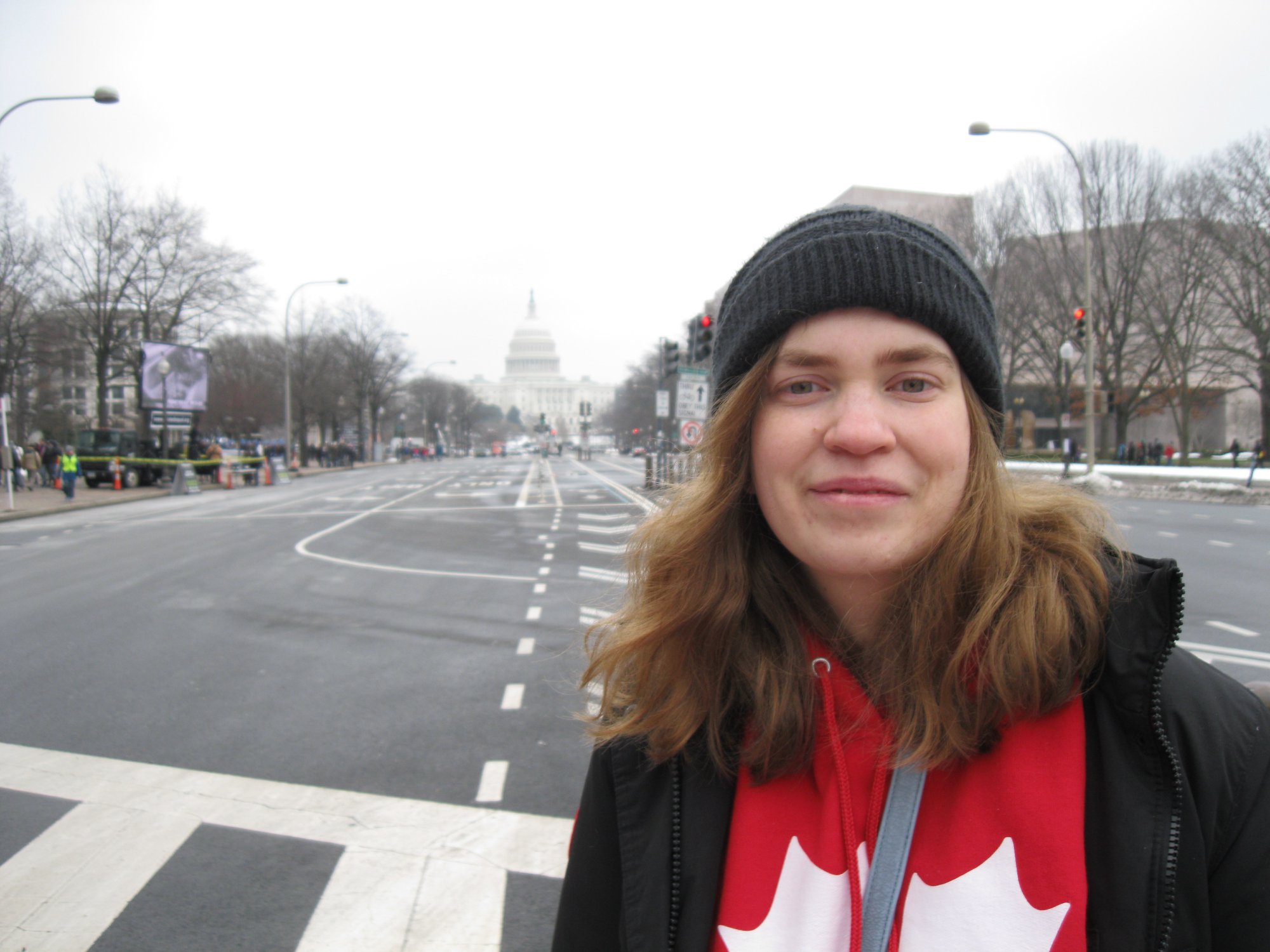 I cannot express in words how much the March for Life in Washington, D.C has inspired me. As we stood in front of the Canadian Embassy, cheering on the hundreds of thousands of Americans that passed us by, I could not help but sense the hope that surged through the air, like a great and powerful wave. I spoke to one of the marchers, communicating my feelings of hope for our cause. He replied, “What we need for our movement is hope . . . hope, and tenacity.” How true is that? The battle continues, and we must muster our strength. Yet, all is in vain if we do not have hope. Hope is the driving force. As William Green said at the SFLA conference, “Hold on tight to faith. You are the generation that will save lives.” Kristin Hawkins, at the SFLA conference, also spoke of hope when she said, “I believe we can run this race and finish it.” Now, reflecting back on my experience in front of the Canadian Embassy, I feel more keenly than ever this tsunami of hope. I am reminded of the profound words, spoken by actress Robia Scott at the SFLA conference, “God is on the move.” From my heart, I wish to express deep gratitude to CLCY and their donors for giving us the opportunity to witness Life in Washington, D. C. 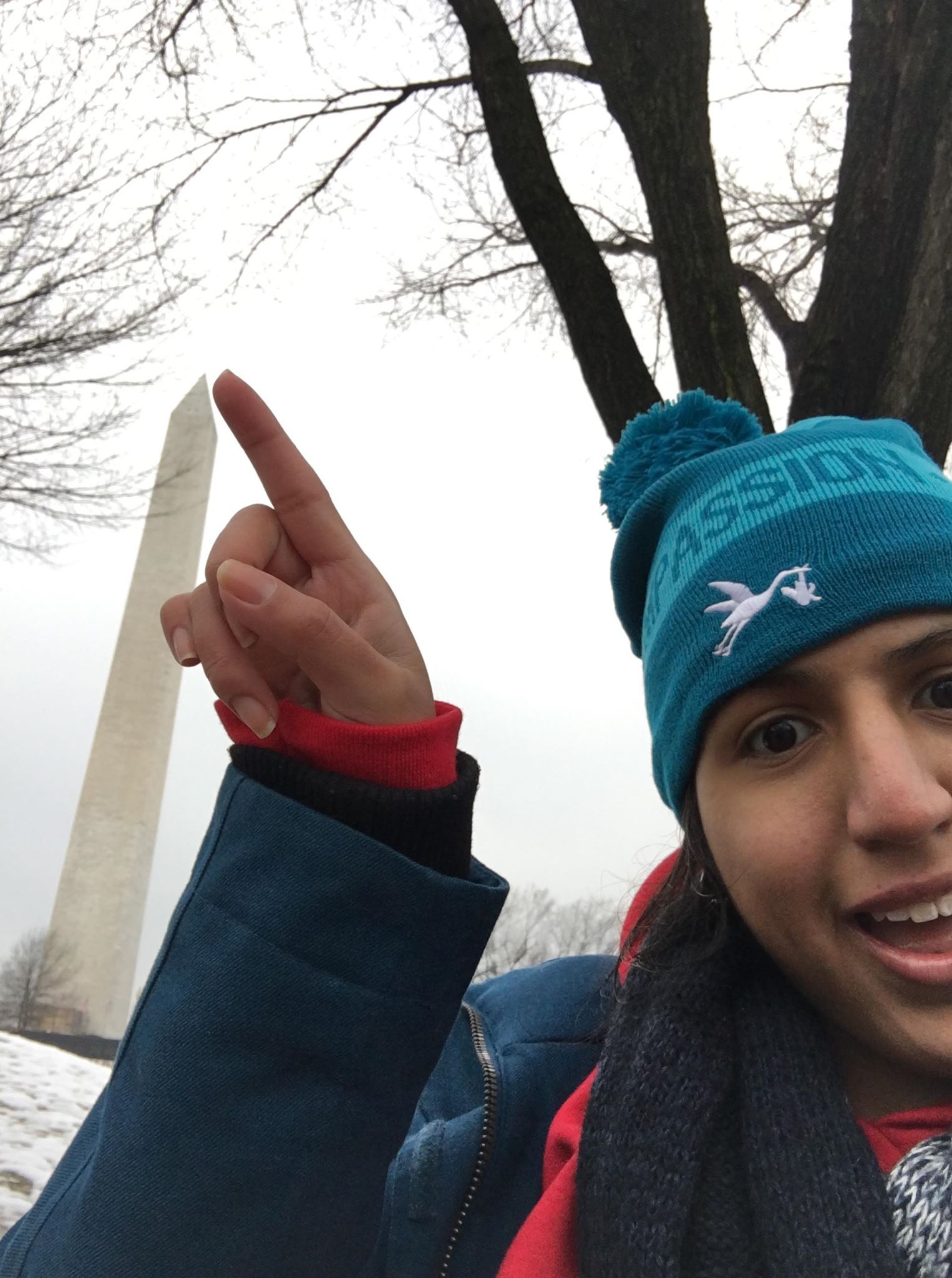 I sometimes think to myself: What have we become? I remember learning in Grade 11 about Canadian culture being a mosaic of cultures versus the American culture being a “melting pot.” Thus, I have always had a weary feeling about the way of life of Americans and their government. Do I agree with everything that Trump says, or thinks? NO. But do I admire his people? Yes, I do, specifically because of the March for Life in Washington, DC. Canadians pride themselves in accepting immigrants and diversity, yet we fail to recognize those in the womb. I witnessed a mosaic of cultures in the USA. The exact opposite of my false predispositions. I say a “mosaic of cultures” because different perspectives are held and seen worthy of their arguments, not melted.

At the conference, I enjoyed learning that there was a place for “secular pro-lifers,” where a belief in God is not a requirement to know that life begins at conception, where science wins, and where it is recognized that the unborn is human, and that many times in the past humans have been treated as “non-persons.” Preborn children are unconscious but so are we when we are sleeping, under anesthesia or comatose. This amazes me because I’ve been guilty of just thinking that you have to believe in God in order to recognize those inside the womb as humans, with the mindset: “God gave you life, thus you shall be grateful.” When trying to explain to someone that abortion is killing, pro-lifers who believe in God often fail to help the other person see the unborn as human beings. 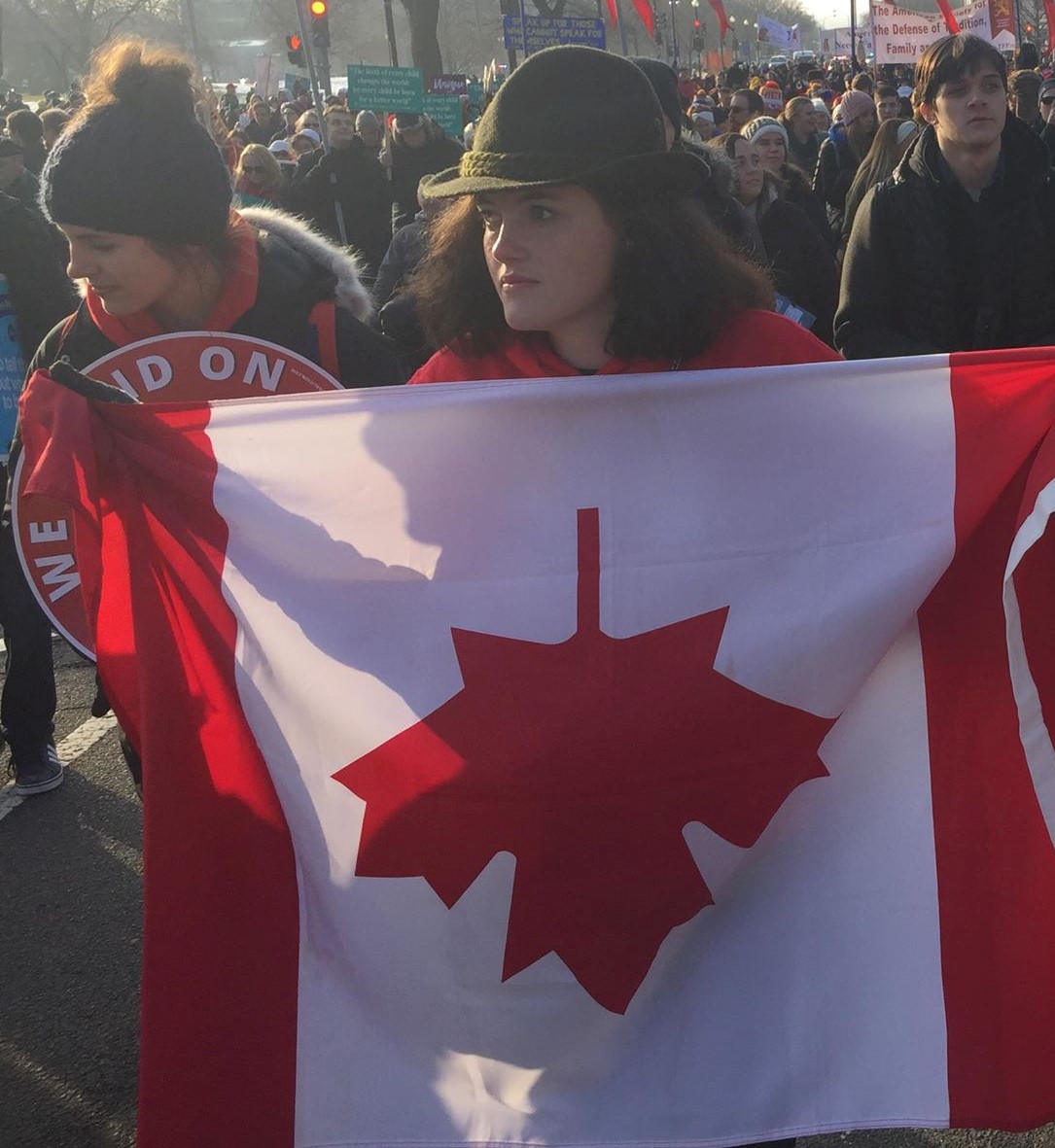 This year I had the opportunity to attend the National March for Life in Washington, D.C., as a youth delegate representing Canada and I have never had such a conflicting experience. Attending was so hopeful and yet so discouraging. So many people stood witness to and defended the rights of the unborn for the whole world to see and it was beautiful. And yet at the same time the rights of the unborn have been so ruthlessly trampled on that thousands upon thousands of people had to stop their daily lives and march on the streets to defend the millions of lives lost at the hands of abortion. Seeing this take place was one of the most powerful moments of my life. This year’s March for Life that took place in Washington, D.C., was and is a major moment in history and I was given the opportunity to take part in it. Later on, after the march, the youth delegates also had the opportunity to attend the conference and talks that encouraged us to continue our movement beyond the march. We were shown how we could bring the movement back home and do things in our everyday lives that will help us do what is necessary to win the fight against the greatest genocide of our time.

As someone who has attended both the Canadian March for Life and the American March for Life, I must point out probably the biggest difference between the two is the way we speak. In America, they speak boldly and proudly without fear of legal ramifications, but in Canada we can’t. The current Canadian government is trying to shut our movement down, and we can only prevent that by speaking louder. Like any movement we have strength in numbers. Each and every one of us must make the absolute hardest effort to attend this year’s March for Life in Ottawa because if not, it’s unfortunately not inconceivable for the pro-life movement to lose the ability to have one. 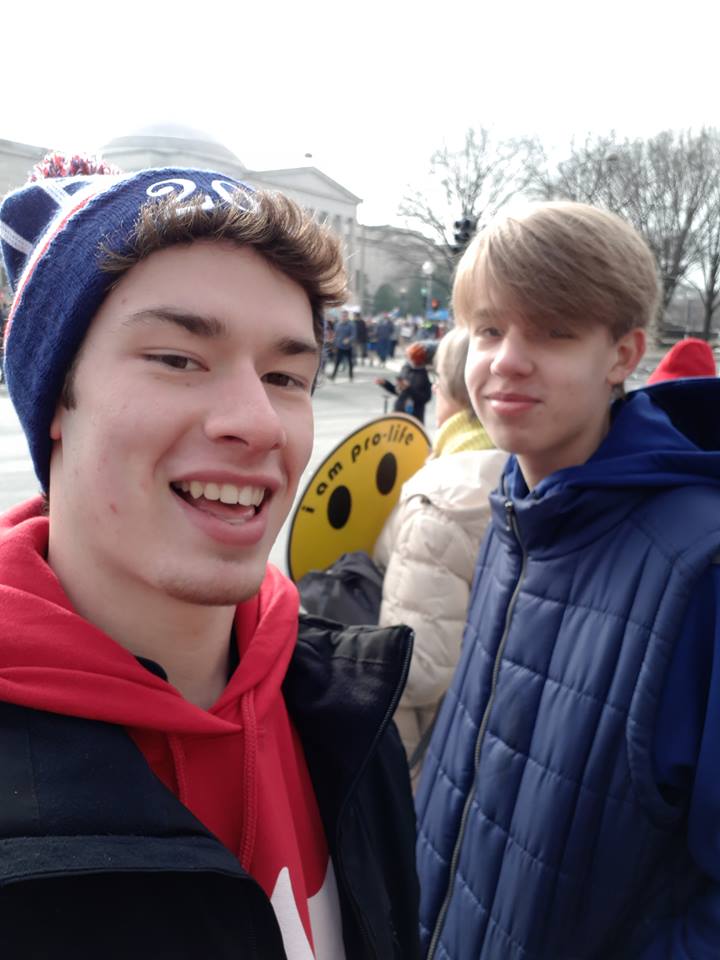 For a few cold days in January, the Washington March for Life and the following Students for Life conference were action-packed, full of warm people with a gentle witness.

We arrived in Washington in time to attend an EWTN interview and listen to Ben Shapiro speak. The sheer size of the rally impressed me, but numbers alone cannot describe the people there. We were there to peacefully do the unpopular thing: stand up for righteousness, as Ben Shapiro declared in his address at the rally. And not because we all were righteous, but because we all were striving to do the just and righteous thing, and stand up against the horrors of the Culture of Death. The crowd seemed bursting with prayerful witness and patriotism; a love of God and country, and of truth and life. This, topped off with a joyful and dedicated attitude, and I could see the true power and purpose of the pro-life movement in one snapshot. To add to this impression, and I say this with pride, is the fact that a great number, perhaps a majority, of these pro-lifers were young.

Later during the March, as our delegation stood in front of the Canadian embassy to cheer on the marchers, this purpose and power was made even more evident. The attitude of the crowd and our delegation was almost festive. There was music, singing, prayer, laughter and cheering to be heard. Yet, to our left, ahead of the marchers, was a video playing on a large screen. It periodically showed footage and pictures of an abortion taking place. The images were heartbreaking. It seemed like a contradiction that we could be so joyful in the face of the bloody reality of the Culture of Death. We could much more easily have been mourning or angry over this holocaust of the unborn. But the difference is because of love. And the difference is made with love. We are only anti-abortion because we are pro-life, pro-love, pro-beauty and pro-truth. I guess you could say we simply love babies and the beautiful, tender care of a mother. And it is the joy in, and love of, the good and beautiful, that brings us to face the evils of abortion and the Culture of Death. And only with joy and love we can and will overcome what we face. This may seem simple, but the March helped me realize this in a profound way.

At the Students for Life conference, the experience was one of a witness to the value of every human life, and also very informative as to how to defend that life. I don't think I will forget William Green’s story about his mother, and her choice to continue her pregnancy despite suffering from AIDS. She miraculously gave birth to a beautiful healthy little girl. Also engaging was Josh Brahm’s talk on the philosophical arguments against abortion, which I very much enjoyed.

Finally, the trip was amazing not only because of where I went, but who I went with. It started off with my coming out of the cold onto a bus where I hardly knew anyone. But with the camaraderie and great values of our group, I believe we became fast friends, despite coming from different walks of, and perspectives on, life. We had great laughs and even better conversations. I am grateful that donors were willing to subsidize the trip for the youths; it was a valuable investment in the next pro-life generation.