The 63rd Session of the Commission on the Status of Women is officially underway and our CLC delegation has been quick to engage with both the representatives present, and the material. Regrettably, much of what has already been discussed, whether it concerned the economic empowerment of Middle East and North African countries or the formation of boys and girls through the use of fairy tales, has been either subtly or blatantly used to promote abortion and related associates of the culture of death.

Below are four items of note from the first day of the Commission. Some are stories of encouragement and hope, while others testify to the desolation that stalks the hallways of the great UN fortress.

One thing particularly obvious is the strategic nature of this year’s event partnerships. We are seeing liberal and powerful nations and abortion-minded organizations (UNICEF, UNFPA, Plan International, Oxfam, etc.) co-sponsoring events with developing nations historically opposed to their abortion agendas. These kinds of unlikely partnerships are probably intended to communicate to the world a sort of amicability that does not actually exist. It is a well-played move by abortion advocates. 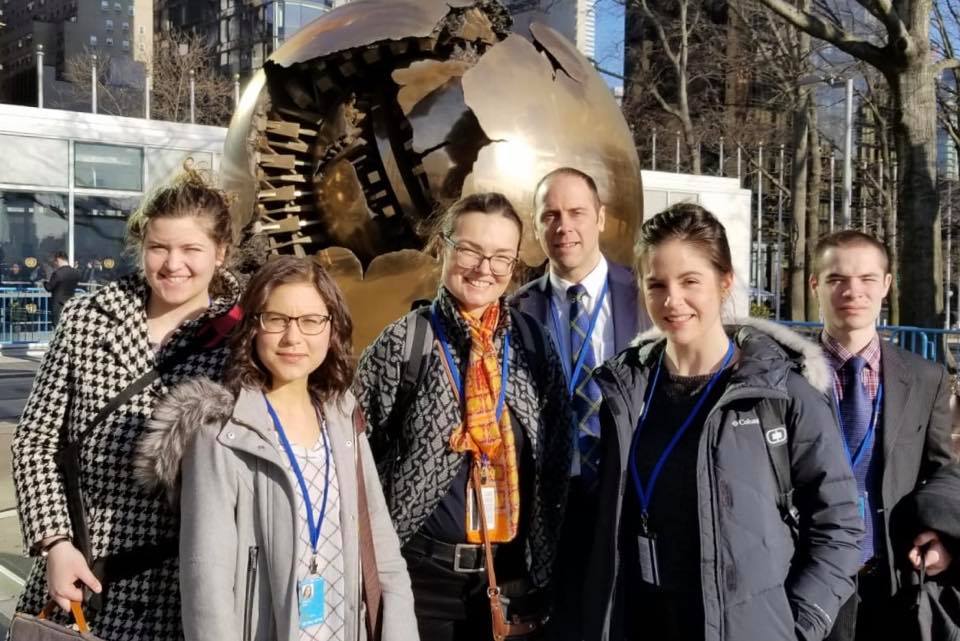 Maryam Monsef, Canada’s current Minister of the Status of Women, as well as Minister of International Development, is representing our country at the Commission. At an event entitled “The Prevention of Sexual and Gender-Based Violence and the Role of ICT,” she promoted our government’s 2018 pledge to donate $100 million over the next five years to 253 feminist organizations across Canada as part of a Capacity-building Fund. This, it appears, will be in addition to the $650 million that has already been promised internationally under the banner of “women’s empowerment.” However, as we know, a significant portion of that money has gone directly to Marie Stopes International, a pro-abortion organization that is well known for committing illegal abortions in developing nations.

At another event, one of our team members engaged a panelist –the Minister of Labour and Social Policy for North Macedonia—on comments that she had made regarding the liberalization of abortion laws in North Macedonia. Minister Mila Carovska said that in the interest of addressing gender-based violence, the country intends to permit women to abort up to 22 weeks without being legally required to obtain the approval of any judge or health care professional.  Our CLC delegate disagreed and pointed out that abortion does not decrease violence, as our rights begin the moment we come into existence.

Finally, another member of our team managed to connect with an African delegate who had been coming to the United Nations for 50 years. With her were a few other African women, two of whom were from Paris (but originally from Mali). Upon learning of her dedication to life in the womb, these women were shocked to also discover that our team member was a Canadian citizen. Their surprise is telling of the international reputation Canada has earned over the past four years under the Trudeau Liberals.

Today, Campaign Life Coalition will be co-hosting an event with two other non-governmental organizations (NGOs) from Mexico—Be Human and Construye. The event is titled: “International Dialogue on Achieving Inclusive Societies through Life-Affirming and Family-Oriented Policies.” The event will feature an expert panel of guest speakers from Brazil’s Ministry of Women, Family and Human Rights, as well as a special guest Antonio Carlos Tavares De Mello, who has founded several communities that work to adopt babies and children with special needs. All the speakers will openly condemn abortion and provide solutions to the “throw-away” culture that has taken over our society.

We look forward to this opportunity to promote a culture of life and to work closely with our international allies. Your support is the only thing that makes all of this possible. Thank you for your time, energy, prayers and financial contributions. Stay tuned for more news from the frontline.

For more on CLC's work during the 63rd Commission on the Status of Women, read: