The 63rd Commission on the Status of Women: A Study in Cognitive Dissonance 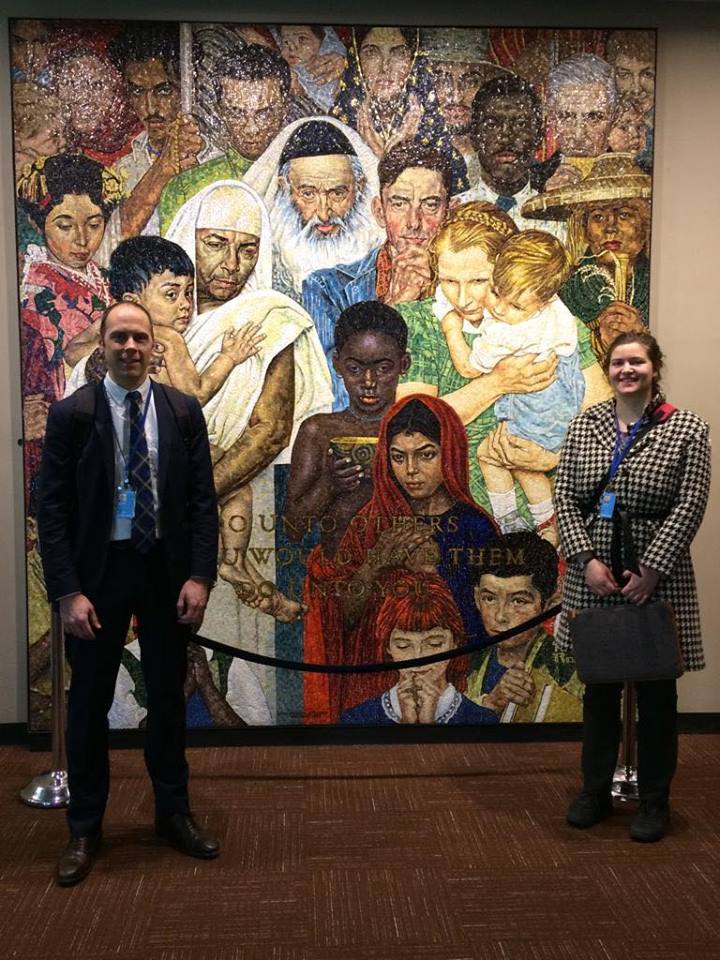 Earlier this month, our CLC team was at the United Nations for the 63rd Commission on the Status of Women. It was an eye-opening experience for a number of reasons. Let me begin with, of all things, the artwork within the buildings. 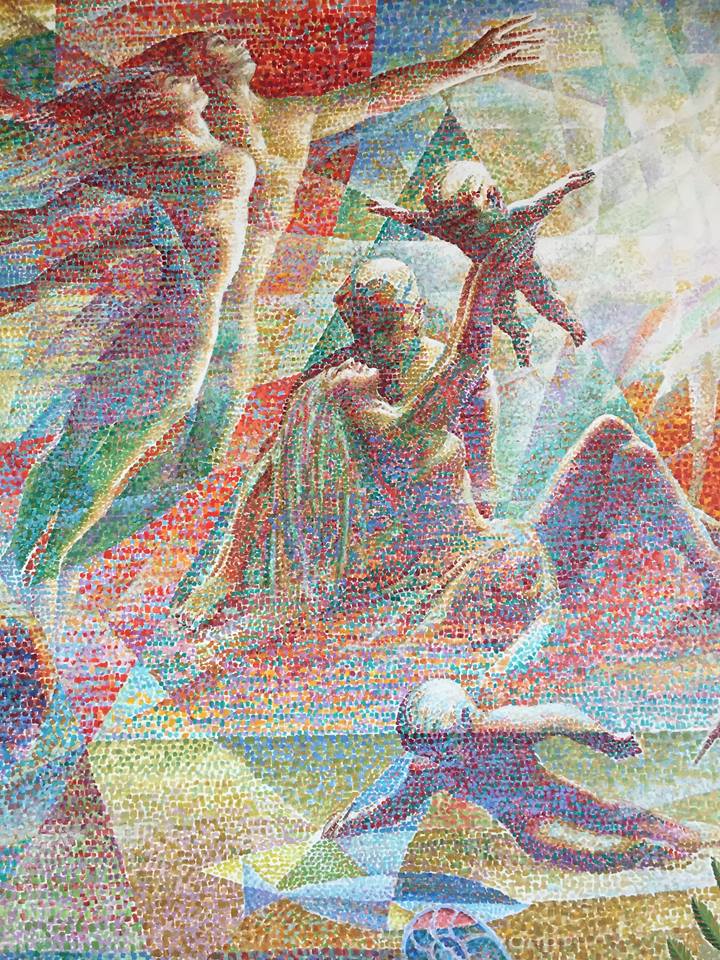 To the left is Georges Buscemi of Campagne Québec-Vie and I in front of a piece that exemplifies what I was taught to believe about the UN growing up: It’s a conglomeration of people of all different races collaborating across cultures to make the world a better place for all. Look at how prominently children feature! The ones at the bottom even look like they’re in prayer (though Georges is blocking one of them). The inscription reads: “Do unto others as you would have them do unto you.” Amen.

To the right is a section of a larger painting that also impressed me. What vibrancy! The complementary natures of man and woman and the joy of new life seem so evident.

There were other paintings that were a lot darker. I walked past a tour guide telling his group that one such painting was meant to symbolize war and the reconstruction period following. The image below on the left-hand side is from the war side of the painting. I couldn’t help but take notice of the hook in the pelvic bone. I know I’m primed to relate everything to the abortion issue, but I struggle to think of a better metaphor for what “comprehensive” sexual education, contraception, and abortion does to society. It “hooks” so many of us to sex as the mere physical production of pleasure and holds us captive. Our fertility is punctured, the potential for new life threatened. Yes, indeed, this is war. It’s a violation of our very bodies and while we remain hooked to sin, what awaits us at the end of the line is only death. 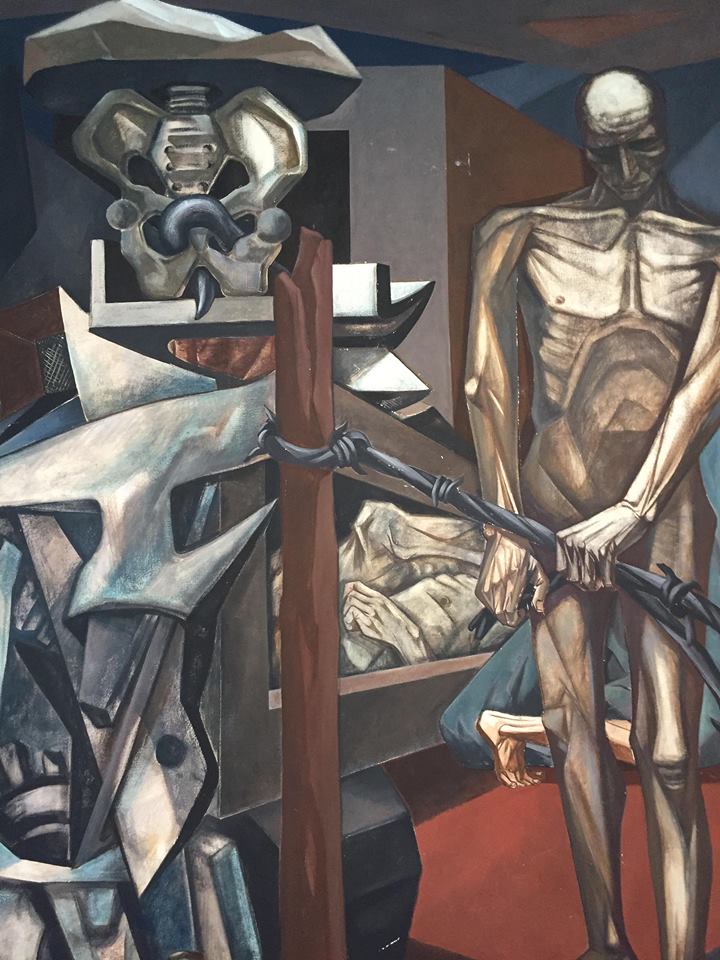 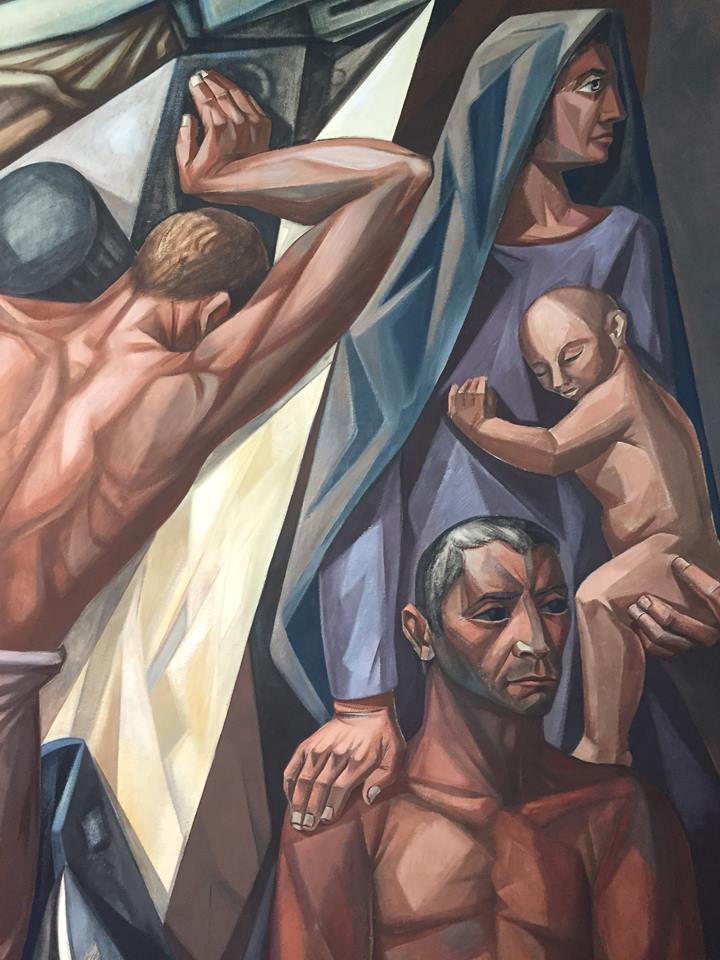 On the other end of the painting, the reconstruction portion, there was a family. In my opinion, it’s still an ugly mural, but the tour guide very interestingly said that the newborn child was intended to be a “sign of hope.”

All of this fascinates me because I went to the UN knowing I would spend the week battling forces seeking to “control the population,” and to “empower women” by convincing them that in order to succeed they need to have fewer children, and later in life. If children are a “sign of hope,” what does it say about the UN that they are so intent on reducing the number of them?

You see, the UN is not the sunshine-and-rainbows peace-loving utopia-bringer that we were brainwashed to believe it to be. Maybe it could have been, but that is not what it has morphed into today. The UN today sees any reference to the “right to life” and “family as the fundamental unit of society” as controversial.

This is the real UN: 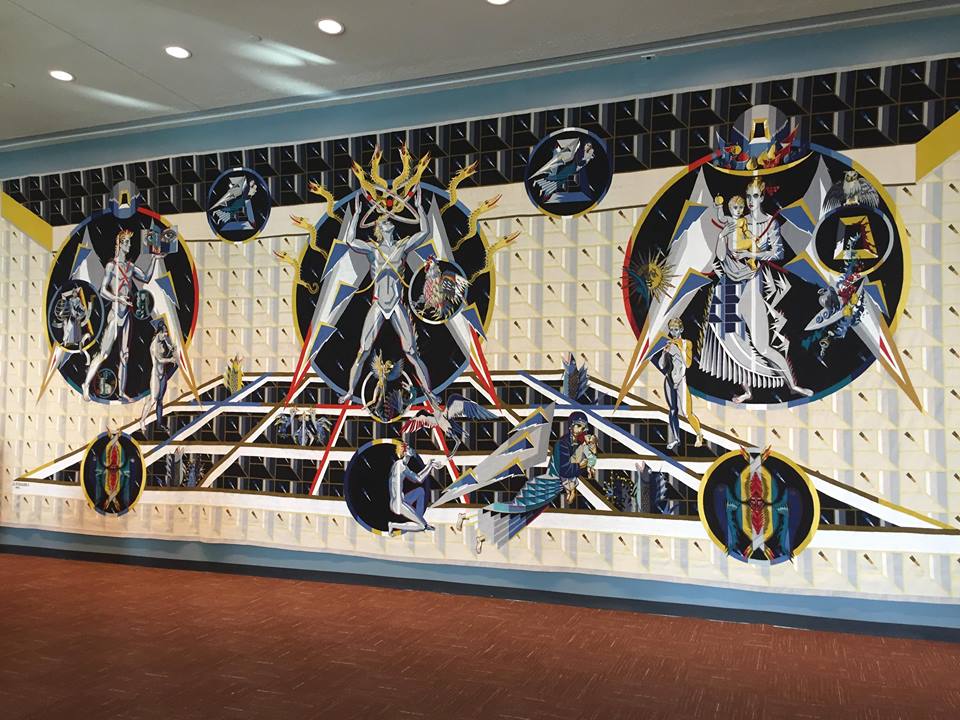 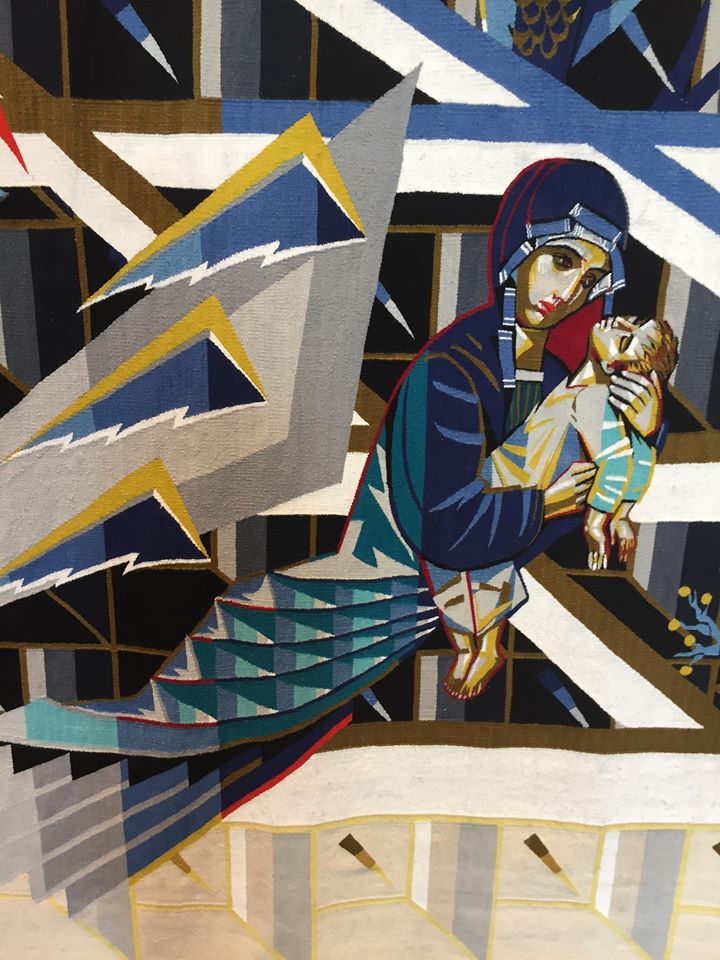 Also, if we zoom in, I can’t help but think that this tapestry contains an image of Mother Mary holding a dead Baby Jesus. Again, how revealing, and puzzling too—that the UN features artwork celebrating life and light and other artwork celebrating death and darkness. How can such beauty and ugliness exist simultaneously?

Just around the corner from this tapestry was a hall dedicated to peace and disarmament, highlighting the horrors of the bombing of Hiroshima and Nagasaki. Elsewhere on the same floor, the evil of the Holocaust is remembered and the articles of the Universal Declaration of Human Rights, developed in response to World War II, presented prominently. All of these displays, presumably, are intended to prevent other human rights injustices, and so, ostensibly, should apply to abortion too. 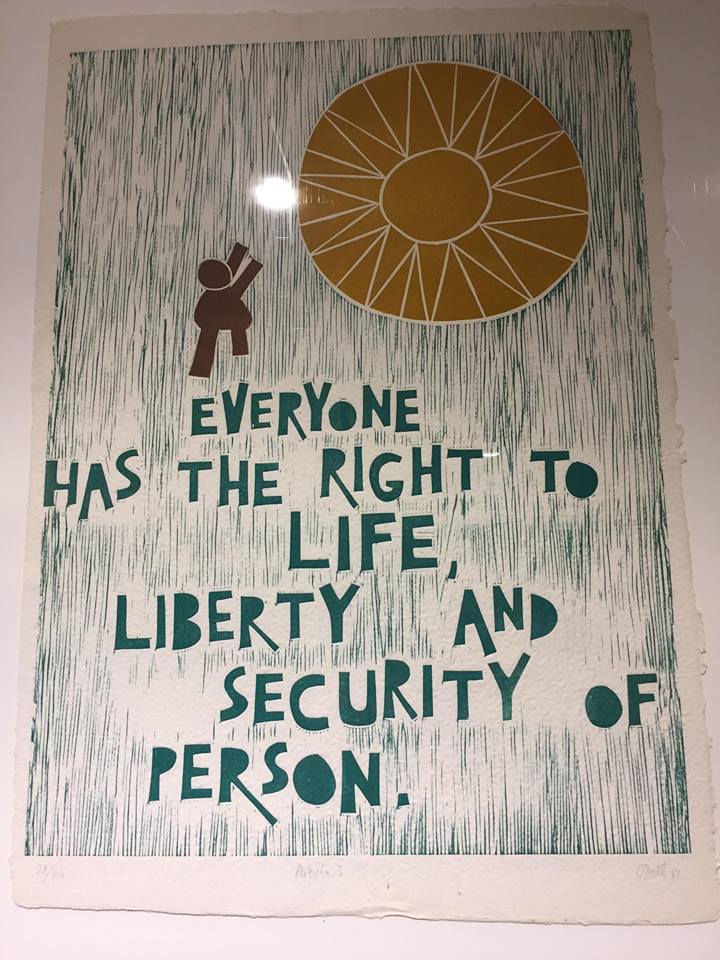 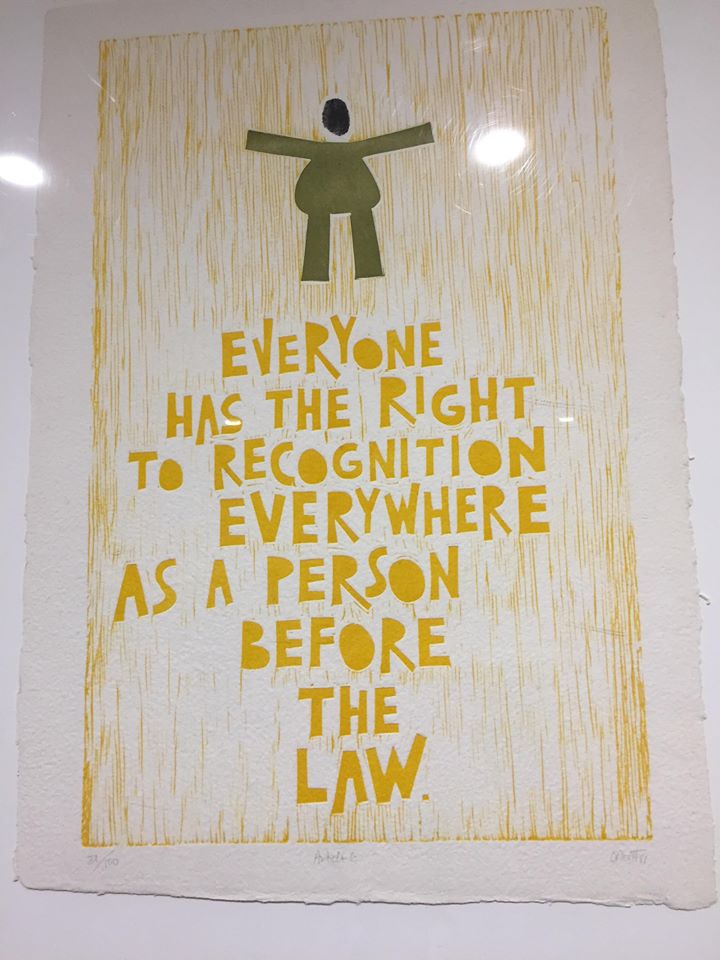 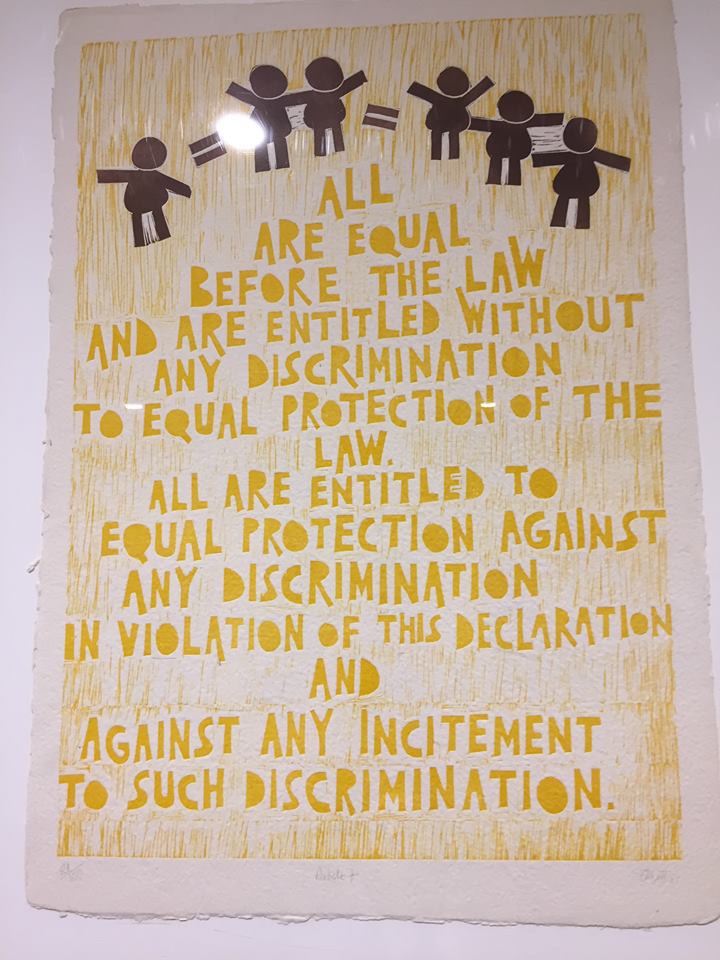 Article 3 of the Universal Declaration of Human Rights, for instance, says plainly: “Everyone has the right to life…”

It could be argued that “everyone” only refers to persons. Well, in that case, cue Article 6: “Everyone has the right to recognition everywhere as a person before the law.” The preborn, then, ought to be considered legal persons.

Furthermore, according to Article 7, “All are equal before the law and are entitled without any discrimination to equal protection of the law,” implying that the mother’s rights and the child’s rights are equally as weighty. The child cannot be considered lesser just because he or she is smaller, less developed, more dependent, and in the womb. 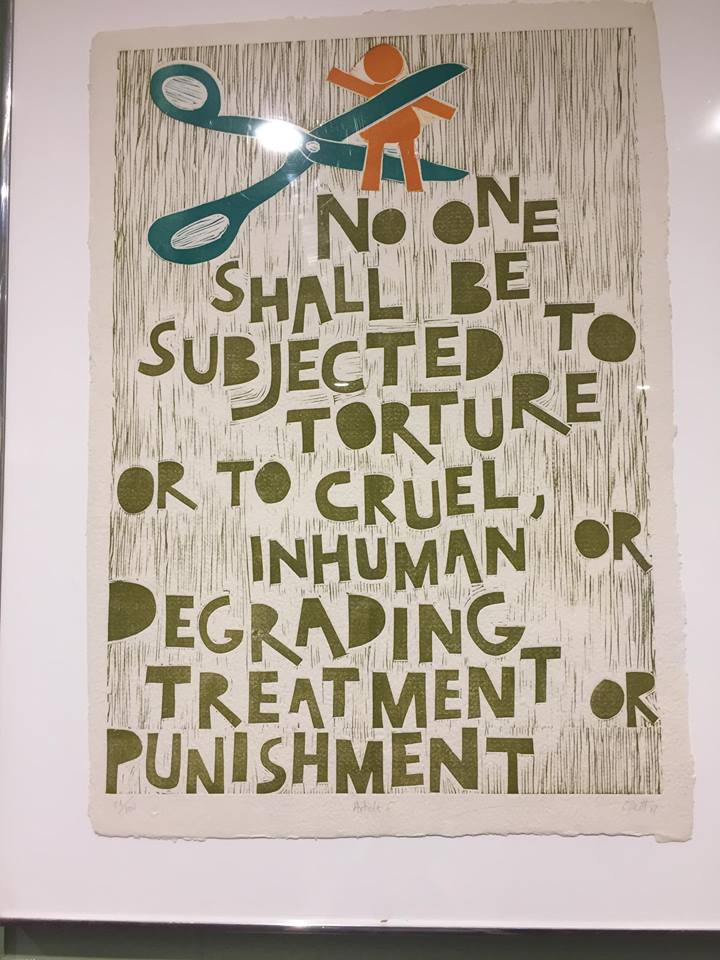 Article 5 reads: “No one shall be subjected to torture or to cruel, inhuman or degrading treatment or punishment.” Depicted is a person being cut in half by a disproportionately large pair of scissors, which makes me think of a very similar-looking sopher clamp, used to tear a preborn baby apart in an abortion. It certainly seems, then, that the preborn are deserving of the same human rights as everyone else, including the right to life, and that abortion violates those rights.

The last article of the Declaration, Article 30, also makes clear that under no circumstance may these rights be disposed of. The feminist cause, a woman’s right to bodily autonomy, fears about overpopulation—nothing can justify the elimination of the rights of the preborn. 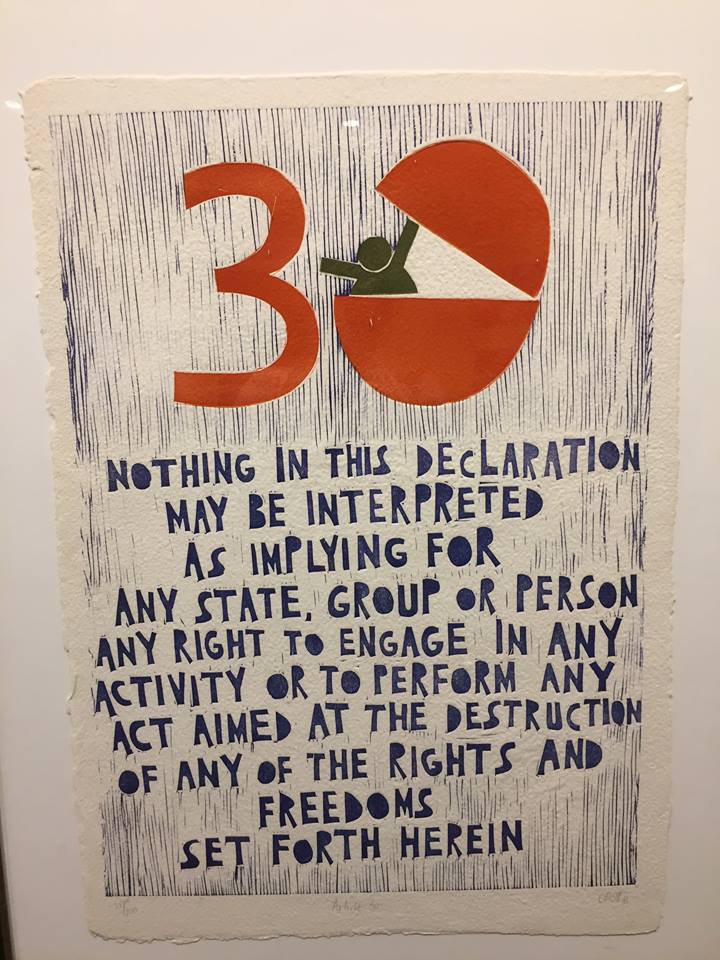 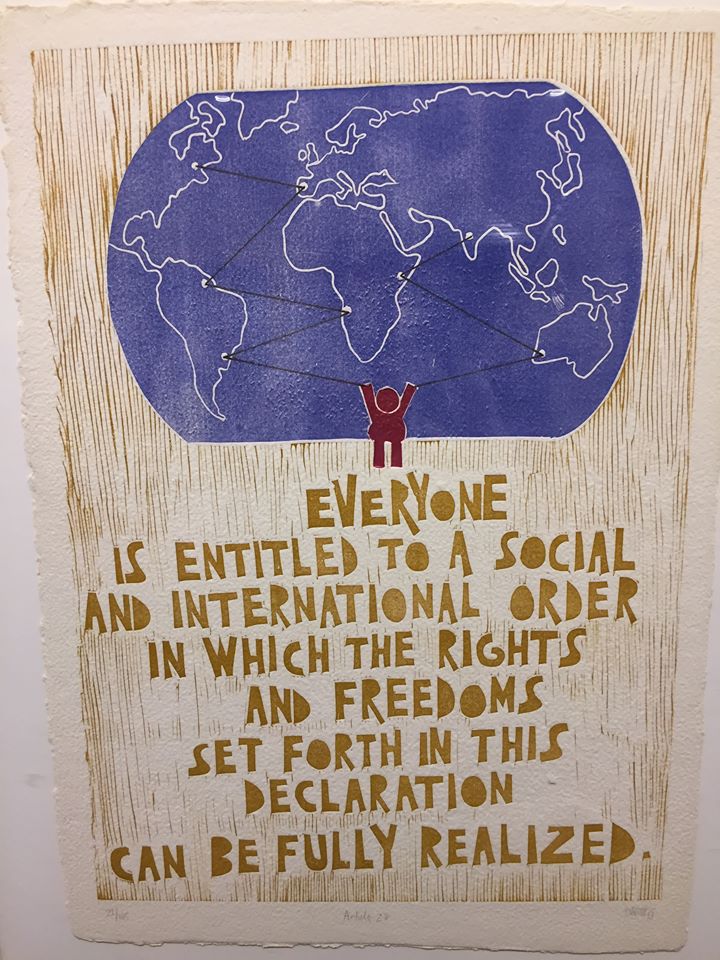 Finally, even if someone were to argue that, regardless of the rights issue, protecting the preborn is just not feasible in the current world, Article 28 asserts that giving up is not an option: “Everyone is entitled to a social and international order in which the rights and freedoms set forth in this declaration can be fully realized.” If the world is not presently receptive to the life of every preborn child, we need to make it so.

Reading these articles from the Universal Declaration of Human Rights, the pro-life message comes through so clearly to me, but incredibly, others remain blind to it.

After a UN side event on reducing gender-based violence, I ended up speaking to the Minister of Labour and Social Policy for North Macedonia, who had eagerly described on the panel how her country was in the process of loosening their abortion laws. I gave her my card, which says “Campaign Life Coalition” at the top, and immediately she said, “You’re from the other side. I’m for choice.” Being from North Macedonia, she had likely never heard of Campaign Life Coalition before, and the side event hadn’t even been on the topic of abortion. Simply the word “life” was enough to tip her off. What does it say that there are people out there freely admitting they’re on the “other side” of life?

When I asked her how abortion reduces gender-based violence, she pointed out that pregnant women are at a greater risk of assault, and so abortion would help women in those unstable situations. Of course, if one acts out of fear for one’s safety, that’s not a free choice at all! The fact that violence or just the threat of it is incompatible with what she’s supposedly advocating for—choice—seemed to escape her.

Furthermore, when I responded that our rights begin when we come into existence at fertilization, she insisted that according to the UN, rights begin at birth.

At a different event on “Inclusive Public Services for LBTI Persons,” I asked Manitoban MP Terry Duguid, Parliamentary Secretary for the Minister of Status of Women, what could be done to protect women from being preyed on by “cisgender men” using “gender identity” (especially now that it has been separated from “gender expression”) to gain access to women’s spaces like washrooms, change rooms, and prisons. He said he didn’t have an answer for me. How ironic that the Parliamentary Secretary for the Minister of Status of Women, in being more preoccupied with enabling men to be treated as women, is endangering women, and worse, has not even given thought to how to alleviate this endangerment? The cognitive dissonance is strong with this one.

In fact, for the rest of the week, I was bombarded by people, including UN officials, encouraging attacks on the vulnerable—the preborn; students susceptible to believing the lies of “comprehensive” sex education; and the impoverished in developed countries, who would normally reject abortion and immoral sexual practices, but feel coerced into doing so to receive desperately needed resources.

I do not understand how the walls of the UN can say one thing (though, admittedly, in somewhat of a garbled manner, given the darker artwork), but the people within these walls say another. The UN, I learned, is a conundrum. It holds in its hands the hope of so many in this world, but at the same time, is wreaking further destruction itself. Its deception is so hard to detect because it preaches human rights, when in reality, it has only perverted them. What conflict stirs within the UN. The only remedy is to (metaphorically) break open its walls and expose the rot within.