Freelance journalist Sydney Loney wrote an article for Flare magazine published online on the day of the National March for Life titled, "Why are so Many Gen Zers Joining Canada's Anti-Abortion Movement?" CLC intern Shania Nigli and I (Josie Luetke) were interviewed and are featured.

Loney then went on to be interviewed herself by The Big Story podcast about her investigation into the Canadian pro-life movement.

Host Jordan Heath-Rawlings begins by saying, "There are lots of myths, and lies, and assumptions out there regarding abortions . . . and what you think you know about who exactly is out there in front of clinics or at their Marches for Life is probably wrong..."

Unfortunately, he and Loney do not do a very good job of correcting the record, so I'll have to do it for them.

To give credit where credit is due, Loney does recognize that our momentum is growing, and that many pro-lifers are "young, articulate, university-educated women."

However, Loney and Heath-Rawlings use this point to make an appeal for pro-choicers to stop being “complacent” and to become active. Heath-Rawlings ominously says, “if you’re a person who believes in the right to choose and in the progress that has been made on that front over the decades, then it’s important for you to take a really hard look at who is pushing the anti-choice agenda and where they’re doing their recruiting.” Their tone is very condescending, with Loney referring to one 18-year-old pro-life woman headed to the National March for Life as being “like a kid going on a trip.” Heath-Rawlings directly asks if it’s “a conscious effort by anti-abortion organizations to get younger” and Loney replies, “I would say so, definitely . . . Everyone who I’d talked to said that they had been exposed to these ideas in high school.”

They fail to appreciate that while being pro-life might be seen as "rebellious" in our society today, the young people getting involved in the movement are not being lured into it and are definitely not entering it under any delusions about improving their popularity. They often endure backlash and discrimination for their sincere conviction that abortion is a human rights injustice and that we ought to oppose it. Unlike their parents and grandparents, youth today have access to the science of embryology, ultrasound images, and the sordid details of abortion literally at their fingertips—a simple google search away—and so that knowledge is driving a lot of them to enter the formerly taboo abortion debate.

Relatedly, we're not co-opting a rights-based language simply for pragmatic purposes; pro-lifers have always believed in and talked about how abortion hurts women and how every human being is deserving of the right to life. It is the abortion lobby which is manipulating "rights" language to insidiously justify the killing of preborn children.

Furthermore, graphic images of abortion are not "false," as Loney claims, and, in fact, I provided Loney with evidence proving so, including links to signed statements verifying the authenticity of the images. These images simply convey the truth of abortion and they can and are used in civil conversations all the time. I also did not "talk around" this issue of graphic images (and greatly resent that accusation), and if Loney was looking for an answer to the specific question of how using graphic images could be considered civil, then she should have asked it. Yes, the pictures—and therefore abortion itself—are "disturbing." It is precisely to reveal the disturbing nature of abortion that some pro-life activists use graphic images in the first place (with appropriate considerations about targeting adults, not children).

It is a good thing that pro-choicers are being forced to admit that old myths and stereotypes about the pro-life movement (e.g. that we're all old white men) are false.

It's just a shame that they're replacing these lies with other ones. 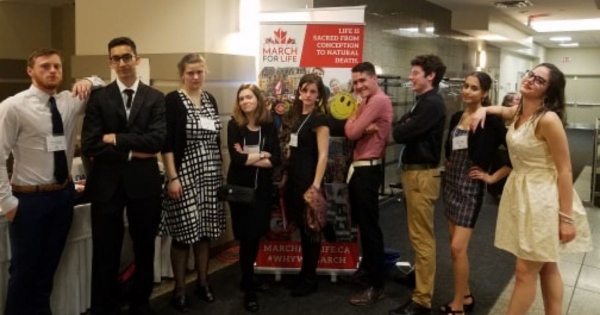