The only debates of the Conservative Party of Canada (CPC) leadership race took place last Wednesday in French and last Thursday in English.

If you’re a Conservative Party member, you’ve likely been bombarded with emails from all four candidates’ campaigns over the past few months, but these debates were still highly revealing.

The French debate was mostly dominated by Erin O’Toole and Peter MacKay, as both Derek Sloan and Leslyn Lewis are new to learning French. Despite this limitation, they both were able to establish themselves as social conservatives, and Sloan got praised in The Toronto Star of all papers for having a “possible talent for languages.”

In his opening remarks, Sloan pointed out that pregnancy is not a disease, and abortion isn’t health care. He pledged to cease funding abortion overseas. Lewis, meanwhile, described family as the “cornerstone” of society.

Interestingly, during the debate, Lewis pressed MacKay as to whether, if elected Prime Minister, he would prevent his cabinet members from voting their conscience. Months ago, MacKay had said that he would, but on Wednesday he backed down and stated he would permit them free votes.

Quebec, where most Canadian French-speakers reside, is more socially liberal than the rest of Canada, so it’s expected that candidates will reserve more socially conservative messaging for English debates. The fact that MacKay reversed course on whipping his cabinet on social issues like abortion, despite the debate audience, is an indication of the power of the pro-life vote. His campaign knows that while MacKay is outspokenly pro-abortion, his chances of winning are jeopardized if he continues to ostracize social conservatives.

Just as cleverly (for O’Toole has been courting social conservatives), MacKay pushed O’Toole to expose himself as a social liberal. Throughout the debate, he repeatedly asked, “Êtes-vous pro-vie ou pro-choix?” (“Are you pro-life or pro-choice?”), and urged O’Toole to be consistent, regardless of audience.

During the debate itself, O’Toole was somewhat evasive, though early on he did bizarrely respond to a question about the armed forces by mentioning he supports a woman’s “right” to choose abortion. In the post-debate media scrum, he definitely didn’t hold back, referring to abortion again and again as a “right,” even though as a lawyer, he should know that neither R. v. Morgentaler, nor any case after it, established abortion as a right. “It’s a right for women, not for men,” he asserted. He even had the audacity to try to authenticate his pro-abortion convictions by saying that as a former member of the military, he is motivated to “defend all rights for Canadians.” Is the right to life not among them, O’Toole?

Watch the whole thing here or a snippet below.

O’Toole wasn’t the only one to get blitzed with questions about abortion—nearly every question reporters asked of every candidate post-French debate was on social issues, which demonstrates how valuable it is to have pro-life candidates running. Even if they aren’t perceived as the frontrunners, they influence the discourse substantially, as we saw with Pierre Lemieux and Brad Trost in the last CPC leadership race. Pro-life candidates, thanks to strong grassroots support, always have a chance of winning (and always exceed expectations), but they can also play kingmaker, as Tanya Granic Allen did in the Progressive Conservative leadership election in Ontario.

While the pro-life movement is clearly served by being engaged politically, we must be careful not to get duped by politicians who will pay lip service to “our important role in the party,” because they want our vote, but won’t offer us any tangible policies. (Looking at you, O’Toole and MacKay.)

It’s vital that we don’t put either of them on our ballot. You might be tempted to, thinking that “At least O’Toole didn’t call social conservative issues a ‘stinking albatross,'” but resist that temptation. For one thing, MacKay and O’Toole are virtually indistinguishable now on the abortion issue, not only from each other, but also from Justin Trudeau. Just like him, they falsely refer to abortion as a “right,” and are offering absolutely zero restrictions on it. Why would we want another Prime Minister happy with an abortion free-for-all?

For another, we do not want to send the message that social conservatives’ votes come so cheaply that we can be won over by an avowedly pro-abortion politician with pretty words and the pathetic propensity to pander to everyone. Remember, we’re playing the long game here. It’s not just about this leadership race; it’s also about the next one. What sort of leadership candidates ought we demand? If we constantly settle for MacKays and O’Tooles, I assure you, the pro-life movement is going to get nowhere.

This realization also raises the question of why so many pro-life MPs have endorsed O’Toole and MacKay, when they are both tripping over themselves to proudly pronounce how pro-abortion they are. Review which MPs have endorsed O’Toole and MacKay and if your pro-life MP is one of them, send him/her an email to ask why. It’s not like there aren’t two viable pro-life alternatives: Lewis and Sloan. 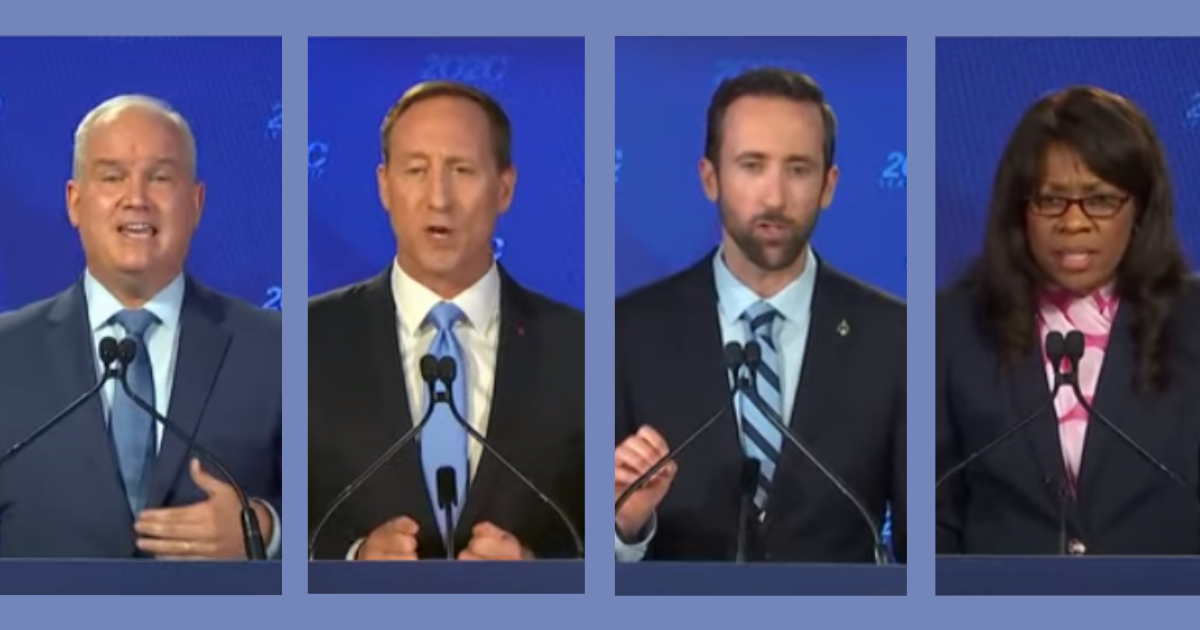 During the English debate, they were obviously much more comfortable, and able to flourish. While MacKay and O’Toole had bickered the previous day about which one of them was doing more to suck up to the LGBTQ lobby, Lewis and Sloan were amiable and united when responding to the one question about social conservatism that the party deigned to include.

Sloan pointed out that “many new Canadians are social conservatives,” and that “we can take principled stances and we can win.” He said that there is actually a lot of agreement within the party that “it’s not right that Canada doesn’t have any laws when it comes to abortion, for instance,” which leaves us “out of whack with most of the developed world.” Lewis added that we need to protect parental rights, even suggesting a parental rights bill.

Sloan went after Bill C-8 (which would ban anything remotely resembling “conversion therapy,” including questioning your child’s identification with the opposite sex) and continued to do so throughout the debate, also calling out Bill C-16 (the bill Jordan Peterson infamously criticized for compelling the use of preferred pronouns). He talked extensively about defending free speech (be it on social media platforms or in universities), rejecting political correctness, and ensuring open and fair nominations. He bemoaned the exclusion of pro-lifers Jim Karahalios and Richard Décarie from the leadership race.

Even though they’re technically competitors, Lewis and Sloan actually made a great team.

I would encourage you to watch the entire French debate here and English debate here. And if you haven’t yet reviewed it, please see CLC’s Voter’s Guide here.

If you’re a Conservative Party member, you should receive your ballot in approximately mid-July. Please rank Sloan and Lewis #1 and #2 on your ballot, or vice versa. Do not, I reassert, rank O’Toole and/or MacKay. These debates made exceptionally clear that neither of these socially liberal Trudeau knock-offs are deserving of your vote.