It is incredibly evident that this pro-choice meme is theologically incorrect, and the creator of the meme has little understanding of Christianity. Firstly, it is true that God has granted all human beings free will, which permits individuals to make their own choices, and yet, human beings have the capacity to sin. Simply because one has the capacity to make a choice does not make the action moral. Morality is not subjective. Secondly, God’s word in Jeremiah 1:5 clearly states, “Before I formed you in your mother’s body, I chose you.” God creates all humans and attributes them innate purpose before they’re born. The “God” mentioned in this meme is not the true God of Christians. 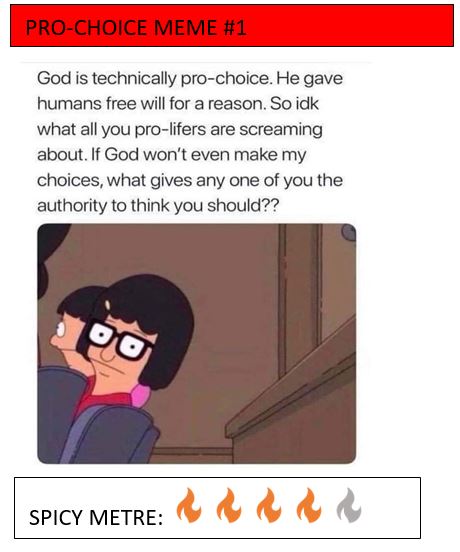 In this meme, “comedian” Morgan Murphy claims that just like having children, abortions are not for everybody, implying that abortions could be for some people (when really, they shouldn’t be for anybody). Some people are not ready to become parents yet, but continue to engage in sexual lifestyles that can result in the creation of children. The murder of their children, by means of abortion, is simply viewed as a collateral damage. Unfortunately, abortion is being promoted as a means of back-up birth control, since sex is no longer viewed as a procreational act. Murphy may be granting that killing is not “for everybody,” but in doing so, reduces the debate to a question of abortion’s palatability, instead of objective morality. You may not want children, but there are many families that do. Adoption is the loving option. Interestingly, this meme is admitting that abortion eliminates children from society. 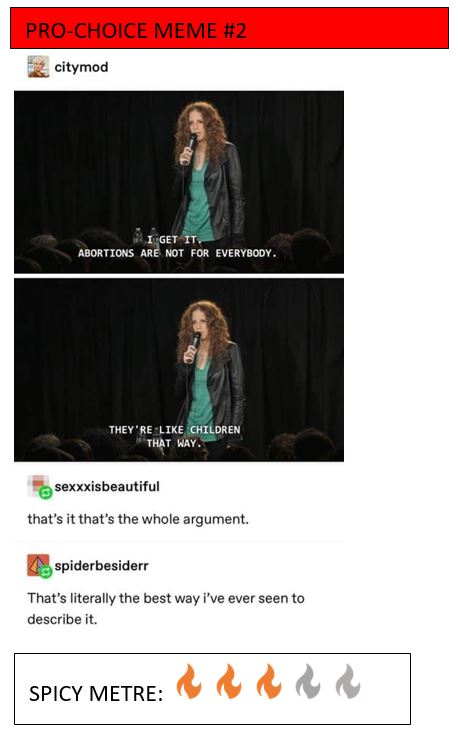 Let me introduce you to the epitome of disturbing pro-abortion memes, compliments of Dank Pro-Choice Memes (which puts out gruesome baby-hating content to their 16,000 followers). The creator is claiming that when a woman faces an unexpected pregnancy, the child in her womb is simply a “mistake” that should be disposed of. The meme also has the effect of discouraging women from mourning the loss of their aborted children, by telling women not to be emotionally attached. This is detrimental to women who have had abortions since grieving is a natural human phenomenon, especially after the loss of a child. The smiling woman in the meme conceals the fact that abortion causes women to suffer psychologically. No human being is a mistake and abortion is not a simple and “harmless” procedure. 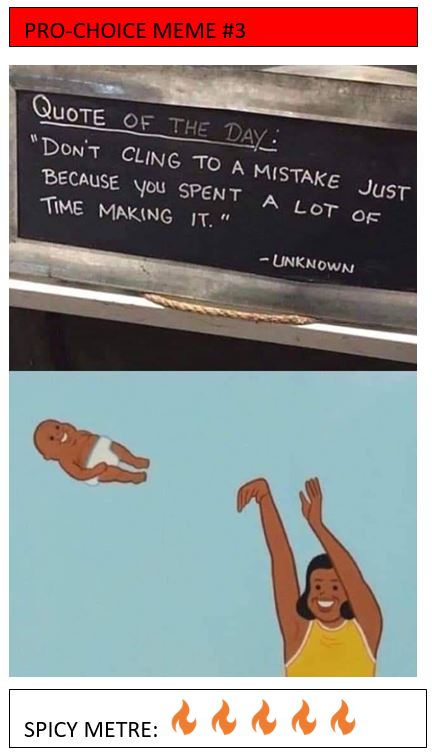 Again, morality is objective. If something is believed to be immoral, we, as Christians, have an obligation to fight for justice. This is like saying, “If you don’t like slavery, don’t own a slave.” This is not about whether we like a particular human rights abuse or not! The real “hard pill to swallow” is accepting that abortion is immoral, not just a matter of preference. Furthermore, women do not need abortion since abortion is never medically necessary. Check out the Dublin Declaration on Maternal Healthcare, which is signed by over one thousand medical professionals. 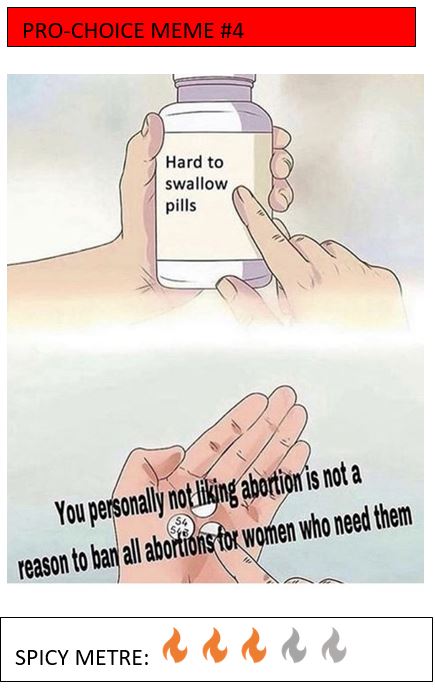 Many pro-abortion advocates completely dismiss basic biology and embryology in order to maintain their positions. Embryology textbooks tell us that, “In that fraction of a second when the chromosomes form pairs, the sex of the new child will be determined, hereditary characteristics received from each parent will be set, and a new life will have begun.” Scientific facts cannot be dismissed and truly prove, time and time again, that fetuses are human beings and are alive. Of course pro-choicers wouldn’t be happy to be reminded of that! For more quotations from medical textbooks stating that life begins at fertilization, see this collection. 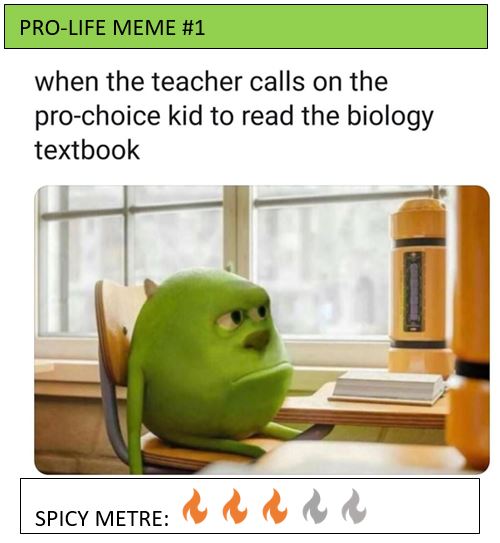 This meme demonstrates how pro-choicers often resort to ad hominem fallacies, or attacks on one’s character. The use of insults instead of valid arguments only creates divisiveness within debates. Identity politics has become incredibly prominent within our society and promotes an ideology in which a person’s identity makes their argument more or less valid. Morality, however, does not magically change depending on one’s identity. Who a pro-lifer is – whether they’re a good person or not – is actually irrelevant to the question of whether abortion is right or wrong. 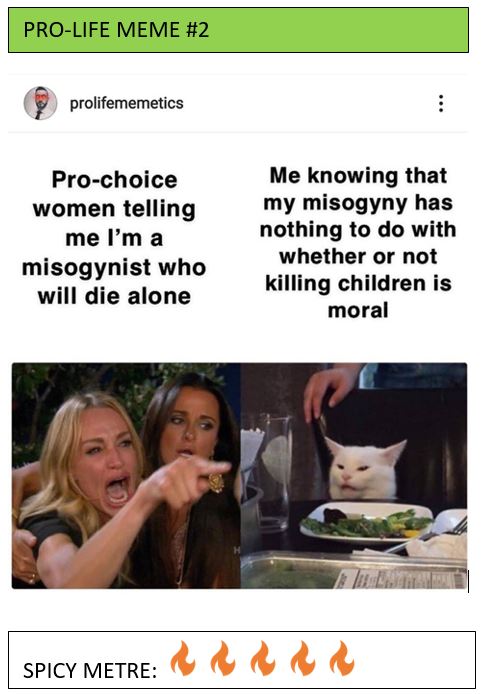 Historically, the elimination or oppression of a group of people begins first with their dehumanization. By claiming that some humans lack personhood, it becomes much easier to exploit and eliminate them. It is (literally) a slide into darkness and destruction. The truth is that all human beings are persons, regardless of their race, ethnicity, level of development, etc. 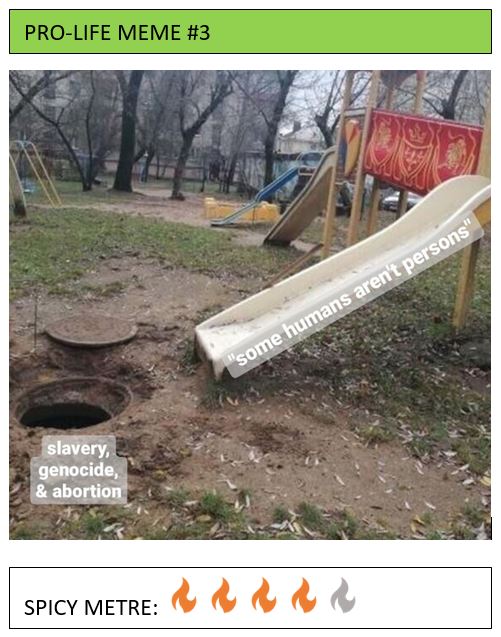 All living things are made up of one or more cells; that is a biological fact. The definition of a clump is “a compacted mass or lump of something,” which is incredibly broad and can describe almost everything that is matter. Therefore, if all living things are made up of cells and can be categorized as “clumps,” then all human beings are “clumps of cells.” Moms are just somewhat larger and more complex clumps of cells than fetuses. So what? 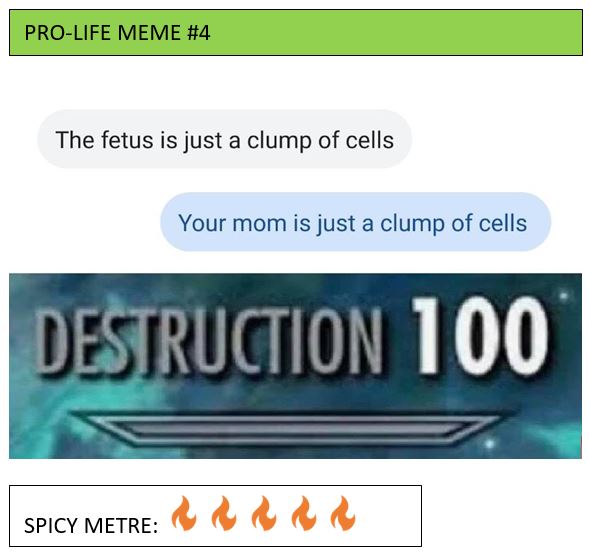