It was now the day of the pro-life summit and all of us were probably more excited for this than the march. We first went to get breakfast again at Bethesda Bagels and then we walked to the Omni Shoreham hotel which was the hosting place for the summit. We were able to get these badges which everyone at the summit got which has our name and school on it which I found pretty cool, and we made our way to the main hall where everyone first gathered. We were a bit late, and Alex Clark was already introducing the Students For Life president Kristan Hawkins to the stage. 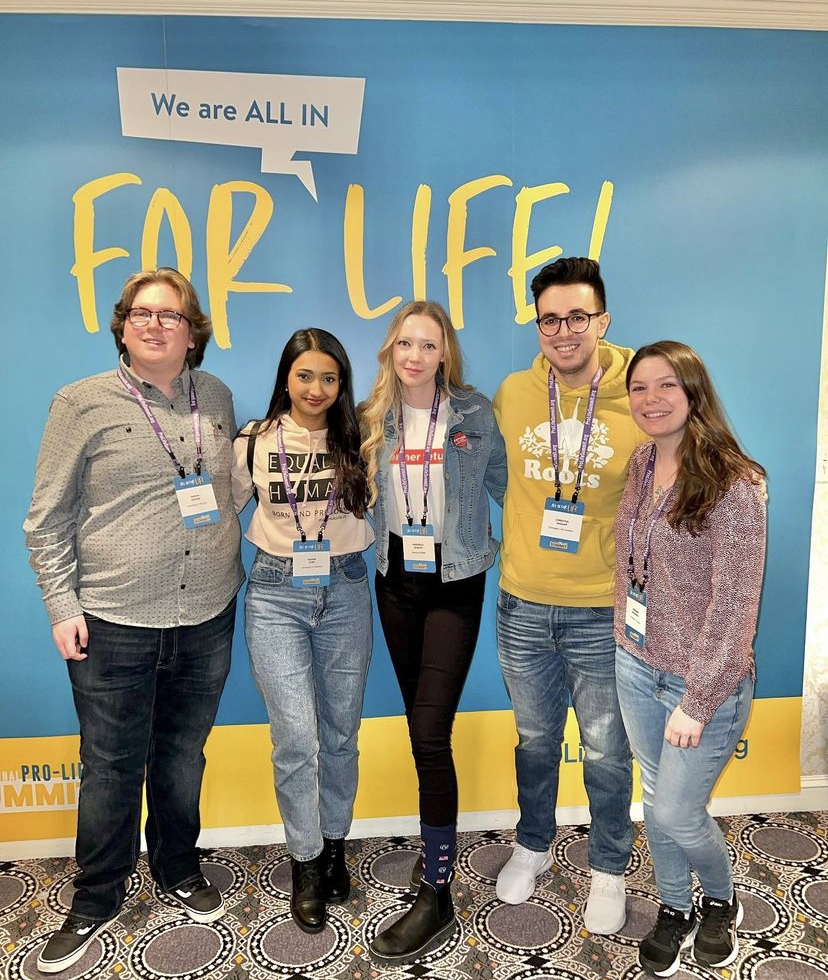 Kristan Hawkins: She made some very interesting points such as when we try to change what is right, we face devastation, and that we must work harder than we have ever worked before. She then mentioned how you can get an abortion for only the price a PlayStation and she “thanked” Joe Biden because of it. Imagine being able to end a life whenever you want for just around $400 U.S? That’s terrible to think about how you can sell your gaming console and then use the proceeds to commit somehow LEGAL murder right after. To finish off,  Kristan then had the honour to welcome one of the biggest speakers to the stage, the 48th Vice President of the U.S, Mike Pence.

Mike Pence: Now before this summit, I didn’t know anything about the Democrats and the Republicans, but Mike Pence really showed me how pro-choice the Democrats are and how pro-life the Republicans are. Pence brought up how he was the most pro-life vice-president in U.S history and how he was part of the most pro-life administration as well. He backed up his statements which what he’s done such as the New Mexico legislation and being the tie-breaking vote of allowing the states to defund planned parenthood. Pence also mentioned how we must fight for life in every state in the nation and how we must elect those who will stand for the right to life. At the end of his speech, he got one of the biggest applauses of the day, and damn, the day just started as well.

It was now time to hear the stories of the many lined up speakers and here is what I was able to write down from every speaker:

Dr. Kevin Roberts: He must be on the offense for the unborn and how he was the lone pro-life Christian in faculty senate meetings. He went on to mention how the democrats think they can discourage us, but we know the truth, and how there are parallels between slavery and abortion, two horrible things to happen in history. He finished off by mentioning how being on the offense, we will take back this country.

Chelsey Youman: She discussed what a post-Roe United Sates would look like and brought up the already pro-life state Texas and how they are dong there. She mentioned how 2000-2500 lives a month are being saved in Texas and how women are largely accepting of the Texas heartbeat act. She then mentioned how we must have all hand on deck and prepare for the overturning of Roe.

John Seago: He first mentioned how he was sued by the abortion industry 14 times because he was a member who worked on the Texas heartbeat act. He also mentioned how the hacking group anonymous tried to hack his website and their tech security did an amazing job to hold them off. He mentioned how civil liability is the best way to enforce pro-life laws and if we boldly innovate, we will we able to end elective abortion.

Christina Bennett: The first point she made is that 2363 children are killed everyday due to abortion. She then told her testimony about how her mother was preparing for an abortion at a clinic, but a janitor convinced her to keep Christina. She then mentioned how the 14th amendment was quoted but wrongfully understood so they overtook every pro-life law in America. She finished off by mentioning how we must act as a catalyst for dramatic change and how love conquers coercion, convenience, and fear.

Liz Wheeler: She first mentioned about how she was very pessimistic of Dobbs v Johnson and how the arguments from pro-choicer’s were very weak: 1) my body, my choice. 2) thinking that they cannot overturn Roe V Wade. She then broke down the possible stances of all 9 supreme court justices with 3 liberals most likely upholding, 3 conservatives most likely overturning, and three judges in the middle. She mentioned how the supreme court listens to us and how there is no law that officially allows abortions and that we must pray that the 9 justices do the right thing. 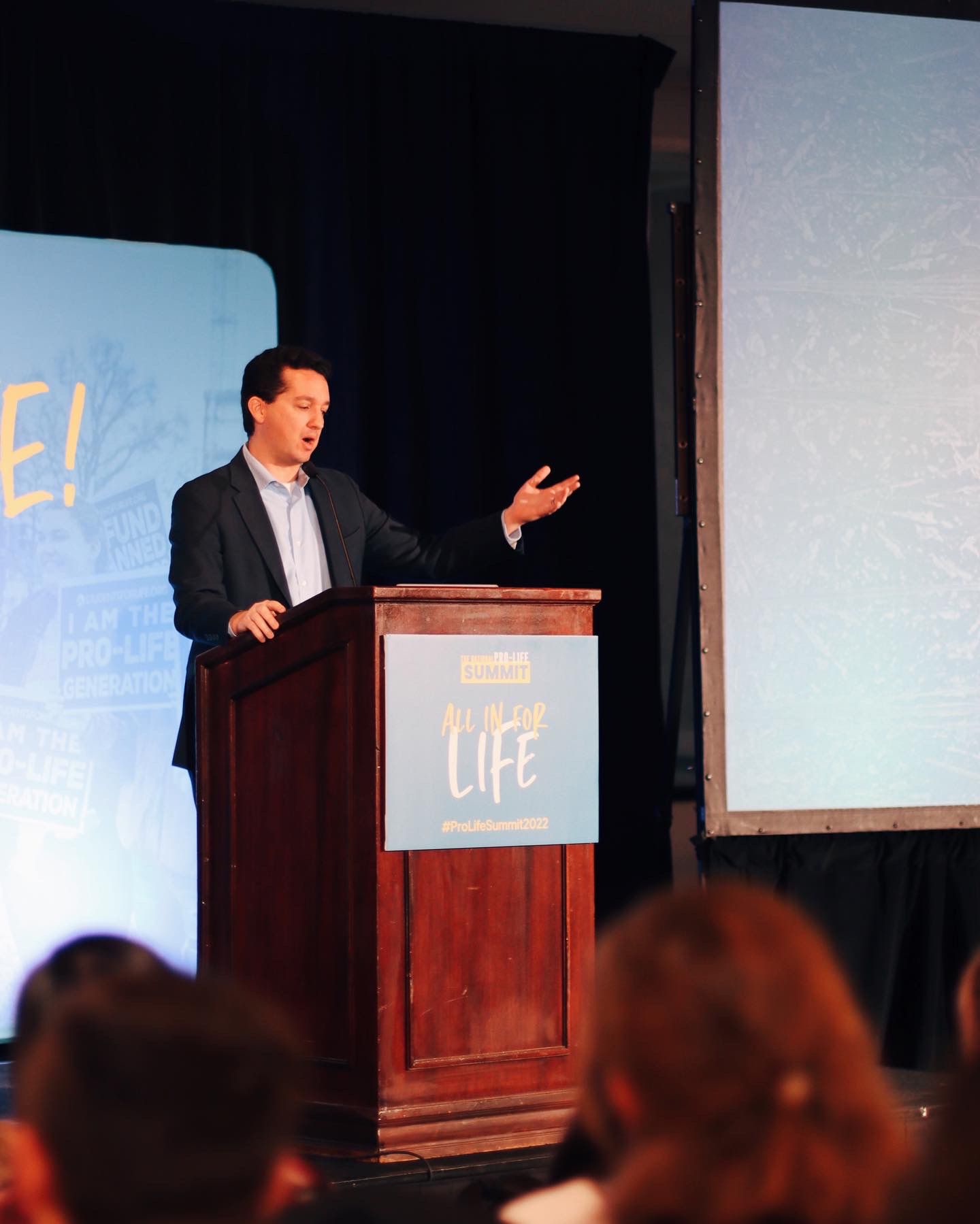 Trent Horn: It was now time to hear from one of the more well-known speakers of the summit, Trent Horn who is one of the speakers and apologists at Catholic Answers. Using his example of doing an exhibit of abortion befores and afters at a school that taught abortions, he taught some good apologetics beginning by saying we must turn their argument against them. He mentions how the facts speak loudly so we don’t have to and how people won’t care about the unborn unless they see that they are humans. He also then mentioned how we should think about pro-choice arguments and if they are on-topic or off-topic. He then mentioned the 4 A’s method (Agree, Apply, Ask Why, Ah) and how size, level of development, environment, and degree of dependency does not matter. We finished off by mentioning how its worst to commit a crime against someone dependent like a fetus.

After Trent, it was now time for us to go into the different breakout sessions that we chose, but first there was an exhibit / job fair that had a bunch of pro-life people and companies giving out information and many free things such as stickers and such. Many people flocked to one table which had Trent Horn himself signing his book “Persuasive Pro-Life” (I was able to get one) and after a bit of exploring, I made my way to my first session. I will be summarizing each session in a few sentences: 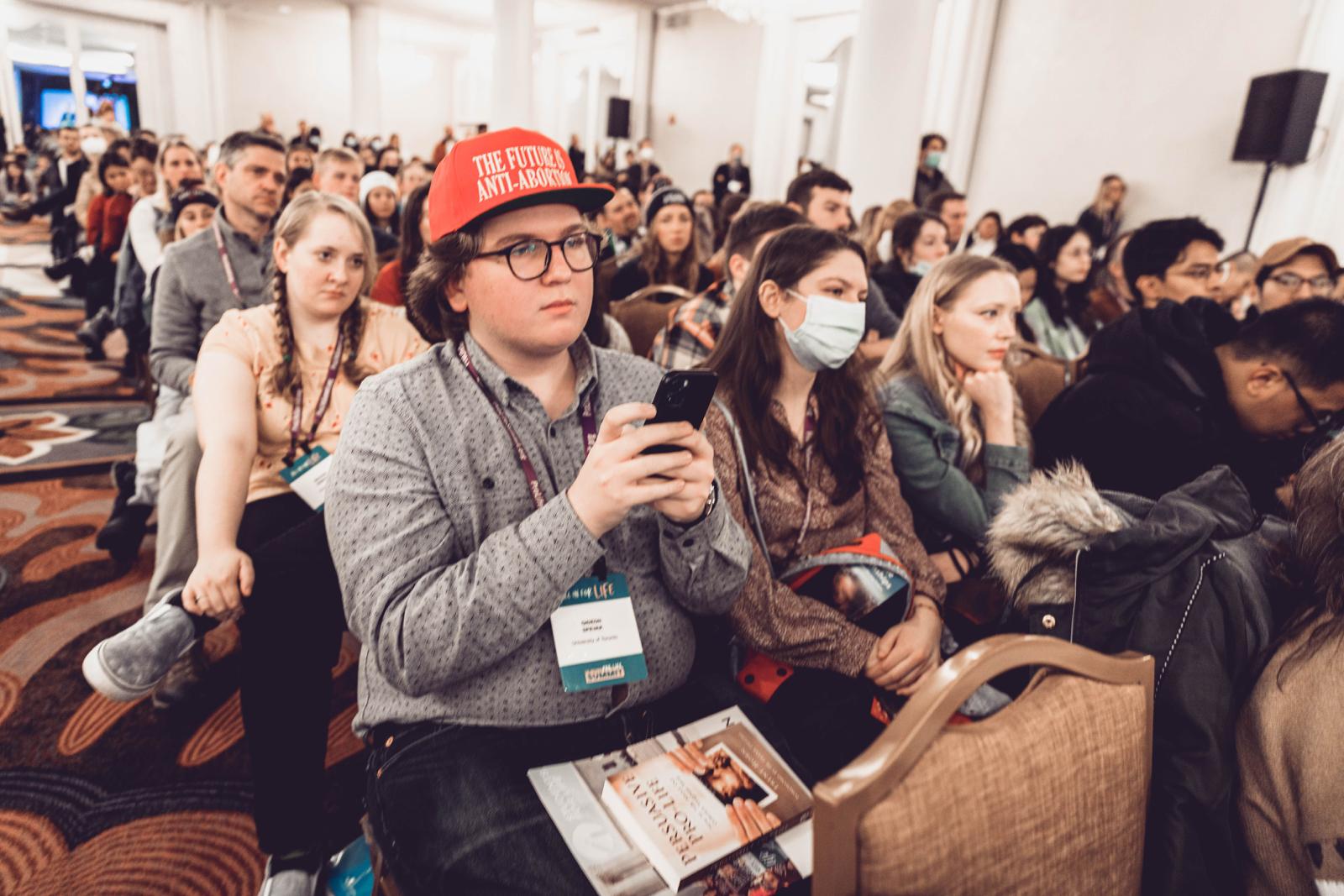 I was a little bit late to the first session because of that job fair and I caught the tail end of Rebekah’s testimony where she was discussing how chemical abortion through pills work. She mentioned how she took one of these pills and had instant regret and started to pray. She said that even if his life was not easy, he deserved to live and build a good life. She finished off by mentioning how we must think of the girls needs first and be there to save their lives and console them.

Amy Fords testimony regarded the church and how she thought her life was over and thought about getting an abortion, but she hyperventilated and passed out in the abortion clinic, so it was postponed. She was also getting married, but her priest did not bless the marriage because she had sinned, but she was able to find another priest to marry them. Years later, she was invited back to her church with her son by the pastor that previously did not bless her marriage, and he asked for forgiveness for doing so. They got asked to go to the pastor’s church to talk and the pastor also publicly asked for the forgiveness of the son as well. She then mentioned how pregnancy centres are he first response team and the church is the hospital and that the church must be better after Roe V Wade. She then finishes off by mentioning that the church is the answer, and it can change the trajectory through love and that we want to be a pro-love church and support women.

Lisa Rowe started her testimony by asking us to think about what the person next to us could be facing and not wanting to share. She mentioned how trauma fogs our judgement and religious beliefs and brought up the statistic that over 1 million people are having an abortion per year and half of them are from people who have already had an abortion. She then mentions how we can end abortion tomorrow if we get into the hearts of those who already had an abortion and that 70% of abortions may be chemical abortions. She then discusses a 4-step process of encountering someone who has been impacted by an abortion: 1) examine my judgement. 2) walk in compassion. 3) ask if the person wishes to share their experience. 4) refer to support. The then finishes off my saying that we must help them navigate what their next step is and we will see more men and women come out of the woodwork.

To be continued in Part Four...