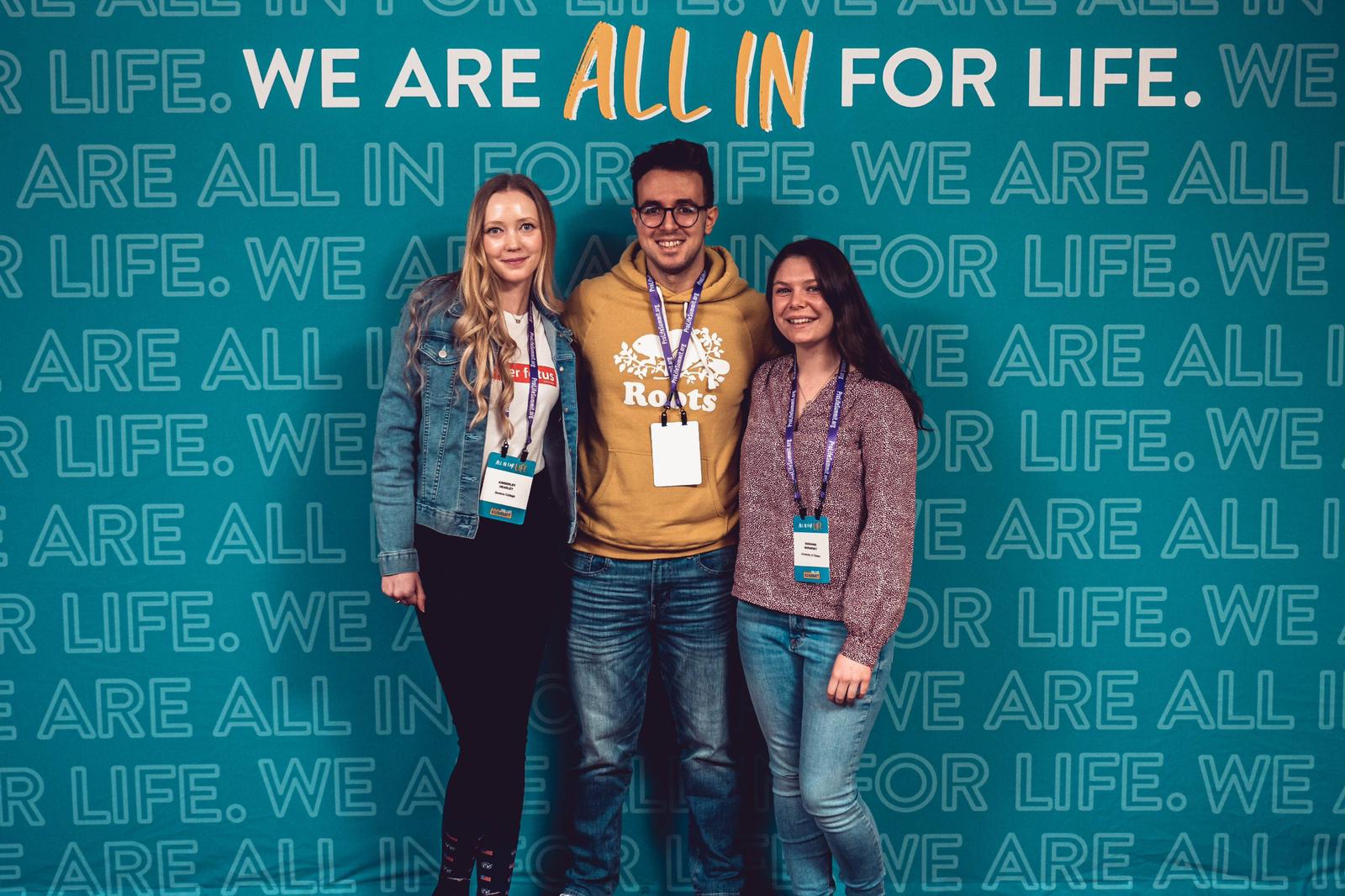 Now it was time for one of the sessions I was the most excited for, of course with Trent Horn once again. I had a bit of trouble navigating the hotel finding the room Trent Horn was going to be in though since it was packed and the signs weren’t exactly the most helpful, but I did find it with time to spare. Trent began by bringing up the pro-choice argument “abortion isn’t wrong because a baby isn’t conscious, and he refuted that argument by explaining how they have confused the difference between harm and hurt, they are not the same thing.

He mentioned that you can harm someone without hurting them and then brought up another example of a lawyer and someone who is clueless of an inheritance. If the lawyer screws over the person the inheritance they deserved, it is like abortion because you took away something that the person had a right to. He then mentioned how terrible genetic manipulation can be and how you are being enslaved by other people for evil reasons and it takes away their right to develop naturally. He then used a few other analogies such as a car and how it is built, but a fetus is not built, it is developed, and he then used the Fuji-film camera analogy where just like the pictures, they are there, you just need to wait for it to develop.

He then brought up the point of a pregnant lady not being able to commit herself to care for the child and brought up 2 points to refute this: 1) if you engage in an activity that makes needy people and you cannot take care of them, just don’t do it. 2) organ use and how parents have an obligation to take care of their child. He then opened it up to the floor for questions and though there were dozens of people lining up to ask him questions, he was only able to answer around 6 people before time ran out for the session. 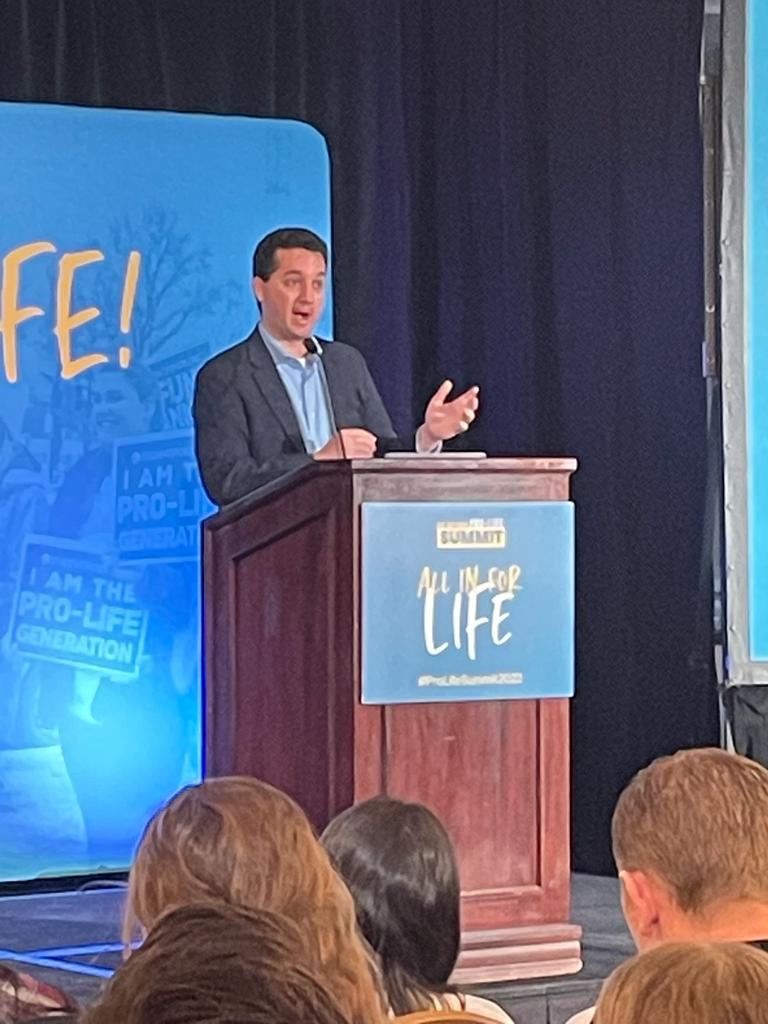 Now I was pretty excited for this session as well as I knew the Theology of the Body was written by Pope John Paul II. Damon mentioned how John Paul II wrote this to cover the distortions of our culture and how it started with a prayer to the Holy Spirit. He mentioned some great moral points beforehand such as there are objective and personal truths and how it is more difficult to come to peace in contradiction. He mentioned how we are uniquely human and that our bodies visibly express who we are and that we don’t have a soul, rather that we are a soul.

Damon then mentioned how morality is about coming to the truth about who we are, John Paul II, explains this in The Theology of the Body in a very subjective way. We find an authority to trust, and we set up structures of authority in our own lives. There are very few sources and people who are infallible but one of them is the truth of the human person by the church. He then finally introduced the history of Pope John Paul II and how he grew up in Poland, was a major influence in the second Vatican Council, and that he brought what he learned from the council to his own archdiocese in Krakow.

He mentioned how every Christian church, but the Catholic Church had accepted some sort of contraception, and he was very influenced by the Papal encyclical “Humanis Vite” written by one of his Papal predecessors Pope Paul VI and how it talked about the goodness of the body. Damon mentioned how John Paul II wrote the Theology of the Body in a chapel and that he broke down his manuscript into 129 short talks. He said that “the body entered theology through the ‘main door’ when the word became flesh and that this document had philosophical, theological and moral consequences which included our relationship to all of creation.

He then finished off by talking about 1) the words of Christ and how it appeals to the beginning, to the human heart, and to the ressurection. 2) the sacrament and how it a dimension of covenant and grace, that is a dimension of the sign and he completed by mentioning how in Christ, we discovered our origin (in the beginning) our history (restoration in Christ) and our destiny (perfect joy.) 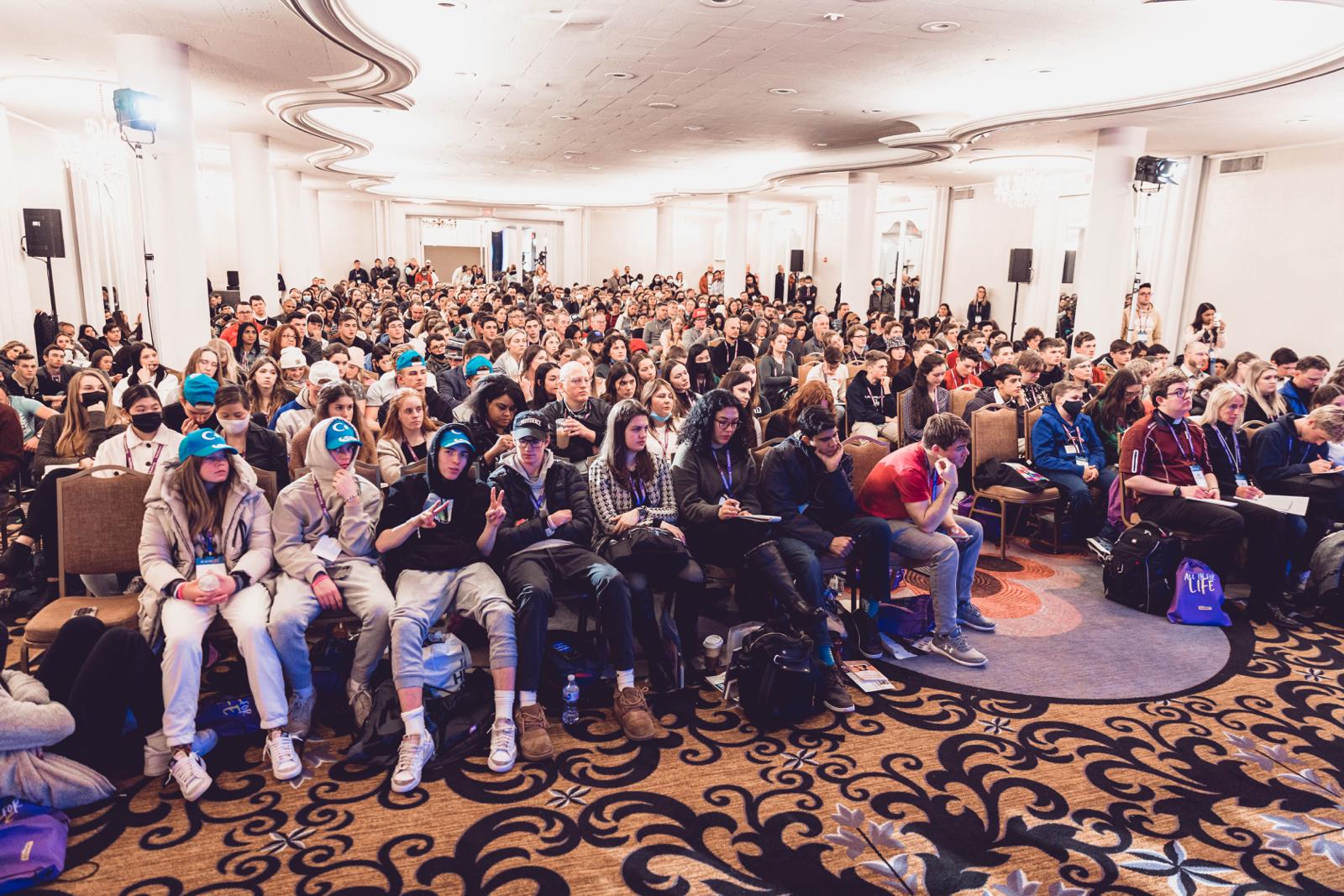 This session was easy to find because it was in the main room that everyone started in. This session focused on how there should not be any pregnancy discrimination on school campus. Roe. V Wade was full of lies and tried to use them to empower women which is why we must try to remove the obstacles that cause women to get abortions.

The first speaker was Ruth who talked about how she was the girl who did everything right in school but when she got pregnant, she thought that it would never happen to her. She felt sick and experienced pregnancy symptoms, so she went to a Planned Parenthood. If she were to get an abortion, it would be a very educated decision, but she remembered her friend Laura who had lost 4 children to abortion and understood the pain, so she decided to keep the child. She gave birth before finals, so she didn’t pass and lost her financial aid (though she did get it back.) She connected the SFLA (Students For Life America) who helped her after she failed her next semester by raising money for her to get back to school. She finished off by mentioning that her life is better with her son and that it takes a walk of courage and faith to be a hero.

The second speaker was Jessica who started off by mentioning she got pregnant in her senior year of college and that she graduated in 2019 with her child Eden. She mentioned how she did pro-life protesting with her child and that her school had a lot of support for parents which helped her greatly. She then mentioned how her story was so inspirational that she was asked by Donald Trump to speak at a rally which is pretty cool. She finished off by mentioning that you can be a strong and good student as well as being a good parent raising a child too.

The two speakers were then asked a few questions, the first one was: What would you say to someone wanting to start or change their schools’ rules to make it more pregnant women accessible? Ruth Answered: ‘If they don’t listen to you, they are not doing their job in serving you,” and Jessica Answered: ‘keep trying, venture out and grow your group to make more of a presence.” Another question they got asked was: “what did having support do for you?” and Ruth answered that it gave her worth back due to the notion that being a pregnant student was a bad thing, and Jessica answered that the best resource you have is yourself, all you have to do is ask questions and see what they offer.

It was finally time for everyone to gather back together in the main hall and listen to the final speakers including our keynote speaker Michael Knowles.

Tyson Langhofer: He began by quoting Thomas Jefferson, that “ that all men are created equal; that they are endowed by their Creator with certain unalienable rights; that among these are life, liberty, and the pursuit of happiness.” He then mentioned how absolute truth does exist and is always valid and how the court system is based on the absolute truth. He then mentioned how cancel culture aimed to show their own truth rather than the absolute truth and how we have the power pf being free to show the truth. He then finished off by mentioning how when we have the courage to fight, we will win, and that people have died so we have the freedom to speak.

Michael Knowles: it was now time for the keynote speaker Michael Knowles from the Daily Wire, and he started off by mentioning how Roe V Wade was a terrible decision and how the national licence for abortion with finally be abolished. He then continued on by mentioning how there is so much more to be done and how there is no constitutional right to abortion. He then quoted one of the most well-known saints St. Thomas Aquinas mentioning how “it is no law, but a species of violence.” Which got St. Thomas a big standing ovation by the crowd.

He continued on by mentioning how euphemisms carry the pro-abortion mindset and knowing that we must define human life as protected and non of us can define reality based off their deluded thoughts. He then mentioned the worst part of Roe V Wade which was it took away self government and caused the killing of millions of babies. He then brought up some statistics saying how 71% of Americans would want limits on abortion and 80% of younger adults say they should be able to vote on abortion laws.

He then brought up a point which really unsettled me which was you can have an abortion up until birth. (that’s beyond terrible) and he used an example of New York and how the former governor made psychopathic paws and how a billboard would be more offensive than the genocide of abortions happening in New York. He also mentioned  that through the over 60 million abortions which gave no chance of life to any of those children, that we are also missing the many millions more of children and grandchildren that would’ve arose from them as well.