Below is an excellent newspaper editorial about the current anti-Bullying debate. It exposes the myths and false assumptions being used by Dalton McGuinty (and the activists to whom he is beholden) to sneak in a radical, hidden agenda under the guise of anti-bullying.

Start of editorial by The Interim

Bullying in the name of anti-bullying

On Nov. 30, Ontario Premier Dalton McGuinty introduced Bill 13, The Accepting Schools Act. This arrived on the heels of a tragic and much-publicized suicide involving Ottawa teenager, Jamie Hubley. The teen suffered with depression and happened to also be openly "gay". The media dutifully painted the picture that Hubley committed suicide primarily due to “homophobic bullying” despite the fact his father , an Ottawa city councilor, admitted the teen struggled with depression for years.

EGALE, the powerful gay lobby group that coordinated and funded lawsuits across Canada to abolish the true definition of marriage, fuelled the media frenzy to create a sense of “crisis,” as if gay teens were suddenly killing themselves left and right. Oh, and of course, the insinuation is that it’s because of bullying at school based on "sexual orientation", although there’s no proof of that either.

In fact, there is evidence that harassment of “gay” teens may neither be as frequent, as severe, nor as disproportionate, as the media and gay-activists allege. EGALE fearmongers by pointing to a survey (conducted by EGALE, of course), stating that 64% of LGBTQ students “feel unsafe” in at least one place in the school. What kind of measurement is “feeling unsafe” anyway?

Is there any proof that it correlates to homosexual students being physically assaulted, or taunted, any more frequently than heterosexual students? Doesn’t “feeling” unsafe sound a bit subjective and open to interpretation? Should that really be the basis of public policy?

Let’s put this into context by looking at a more reliable, mainstream survey done by the American Association of University Women which showed that 83 per of all girls and 79 per cent of all boys report experiencing physical intimidation or sexual harassment at school. By looking at this context, one can see how gay activists manipulate numbers and language, while leaving out context, to whip up irrational fear.

Another revealing analysis is a survey by a close counterpart to EGALE in the United States, called GLSEN, a powerhouse gay lobby group that focuses on schools. GLSEN’s own survey reported that students are more often bullied, called names, or harassed because of “the way they look or their body size” than because of their sexual orientation.

None of this is to suggest of course, that bullying of students who experience same-sex attraction is not serious. It is, and must be punished and, where possible, prevented, with every bit as much vigour as the bullying of fat kids and skinny kids, or any child for that matter.

What about the reports we’ve seen in the media the past several months over the alleged “epidemic” of gay teen suicides? These also appear to be exaggerated. The author of Suicide in America, Dr. Herbert Hendin, reportedly “found no evidence that social discrimination was a major factor behind the suicide attempts of the homosexual students he studied.” Another study by a pro-homosexual researcher found, “gay and lesbian teenagers are only slightly more likely than heterosexual kids to attempt suicide.” 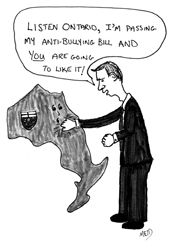 Now let’s get back to Dalton McGuinty’s so-called anti-bullying bill. In early December, Campaign Life Catholics, a division of Campaign Life Coalition, participated in a joint press conference at Queen’s Park, to protest Dalton McGuinty’s Bill 13. They argued that the bill pretends to be about anti-bullying, but in reality, is trying to sneak in a radical, sexualized agenda by legislating the Premier’s gay “equity” curriculum, thus giving it the force of law.

The Bill will require, by law, that all schools, including Catholic, permit openly homosexual student clubs known as Gay-Straight Alliances (GSAs). By looking to our American cousins where GSAs have been around for more than 15 years, we know that these so-called “support groups” will be nothing more than gay pride clubs, agitating for the celebration of the homosexual lifestyle.

According to Campaign Life Catholics, this bill is about forcing Catholic schools to accept a curriculum which undermines Catholic morality on marriage and sexuality; it is about using the classroom as a vehicle to indoctrinate children into embracing a new sexual revolution, pushed by gay-activists.

The gay equity curriculum also expects teachers to promote the concept of “gender-fluidity” – the theory that a child’s gender is not connected to their anatomy and that it’s perfectly normal for little boys to think they’re little girls, and vice-versa. This bill has a radical agenda to get kids to reject the religious beliefs held by their families regarding homosexuality.

Dr. Rondo Thomas of The Evangelical Association pointed out at the press conference that another dangerous clause in the bill appears to target churches and Christian groups by prohibiting rental or use of public schools by external organizations that do not comply with the “provincial code of conduct.” Thomas said that hundreds of evangelical churches currently rent space for worship services from public schools. This clause, he predicted, would be used to ban those churches should they dare to preach, or be known to preach, about biblical passages that deal with sexuality.

Could this clause potentially prohibit Christian groups, even in Catholic schools? For example, would the Vatican-approved Courage ministry for persons with same-sex attraction, be considered in violation of the “code of conduct” for its known opposition to homosexual behaviour? It seems crazy, but one year ago, the thought of openly homosexual clubs in Catholic schools seemed crazy too.

Genuine bullying needs to be stopped, but by focusing on one group, and including restrictions similar to the one Rondo Thomas pointed to, the McGuinty government action begs serious questions about whether it cares about bullying at all, or whether it is using bullying as cover to push it’s pro-gay agenda.

This article is reproduced with permission from The Interim.

Addendum:  The Top 6 Risk Factor For Bullying in School, as per an independent research study by the Toronto District School Board