The original post below was written in a spirit of hopefulness based on the unwavering nature of the bishops' Respecting Difference document vis-a-vis GSAs and prohibiting homosexual activism. However, the situation has changed. On June 5th, after MPPs passed Bill 13 by a vote of 65 to 36, Cardinal Thomas Collins, president of the Assembly of Catholic Bishops of Ontario issued a brief statement in which it appears that he will comply with the legislation and permit the homosexual-activist clubs known as "Gay-Straight Alliances" in Catholic schools. We encourage you to RESPECTFULLY contact the bishops of Ontario and urge them to invoke Section 93 of the Constitution Act which permits them to reject legislation which adversely affects faith and morals.

In invoking Section 93, the bishops would not be doing anything extraordinary, but in fact merely heeding their own instructions to laity in a recent pastoral letter on Freedom of Conscience and Religion.

Dalton McGuinty has been pressuring Catholic schools to allow openly-homosexual student-led clubs that would predictably celebrate gay pride, under the guise of “eradicating bullying”.

Faithful Catholics, and parents of other religions who send their kids to separate schools, have been waiting anxiously for a response by Ontario’s Bishops. They’ve been praying for the Bishops to resist McGuinty’s belligerent attack against parental rights and religious freedom.

We’re pleased to report that prayers have been answered!

Although we have been encouraging the Bishops to reject the government’s directive outright (by asserting Catholic constitutional rights), they did the next best thing. 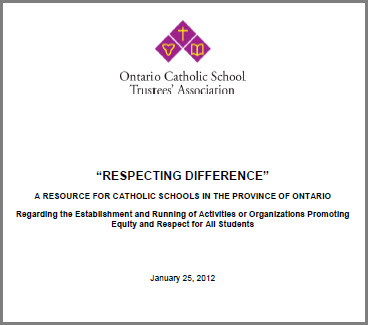 On January 26, 2012 they released a framework for anti-bullying clubs that would appease the government's alleged desire to “support students who are bullied”, while at the same time side-stepping the government’s apparent, real desire to have all students celebrate homosexuality.

The document, titled Respecting Difference, was released through the Ontario Catholic School Trustees Association (OCSTA). In our opinion, the guidelines are well-thought out. They anticipate homosexual-activism and try to put control mechanisms in place to discourage such activities and attitudes.

Here is a list of the various controls laid out in the guidelines for the Respecting Difference student clubs to be permitted in Catholic schools:

Furthermore, the document makes some important clarifications that are helpful to steer Catholic educators onto the right path, especially amidst the deliberate attempt by the government and the gay lobby to muddy the waters around Catholic teaching. Some key points made in the document are:

a. States that the primary teaching document of the Catholic Church is the Catechism of the Catholic Church.
b. Clarifies that persons with same-sex attraction are called to chastity (as are heterosexuals).
c. States that: “respect for difference” must be “discussed against a clear moral background”.
d. Clarifies that “Being tolerant of another person does not mean we have to accept that what he or she says is immune from moral evaluation or criticism”.
e. Clarifies that “it is possible to respect, affirm and support the dignity of another person, while at the same time disagreeing with their viewpoint on sexual morality”.

Now it will be necessary for all schools to ensure that both the letter and the spirit of this document is followed. That is an area where Catholic parents and ratepayers can get involved at their local school level.

Involvement by parents is crucial especially since Dalton McGuinty's Equity & Inclusive Education policy has several more threats to the Catholic faith than just the GSA component. The problem still remains of all the other dangerous elements still in the curriculum such as LGBTTIQ gender theory, "homophobia" and "heterosexism" to name a few. 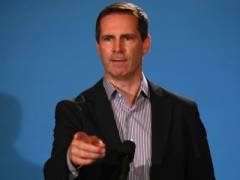 The other unknown factor in this situation is just how totalitarian Dalton McGuinty will choose to behave.  On January 30, four days after the Respecting Difference document was made public, the Education Minister Laurel Broten, told The Catholic Register that the document is unacceptable.

Apparently, she was so confident in her bullying of the Catholic Church, that she did not expect the Bishops to have the gall to mandate "that all clubs and activities must be respectful of and consistent with Catholic teaching".  It seems she expected them to simply surrrender  the hearts and minds of Catholic children to the secular, anti-Catholic agenda of McGuinty and his gay-activist allies.

Will Dalton and his pitbull Broten back down? Are they simply testing the bishops, to try and get further concessions from them? Minister Broten told The Catholic Register she rejects the Respecting Difference document, stating  "We’ve been absolutely crystal clear that we expect students to participate in groups and have the issues important to them talked about". She insists that Catholic schools must allow single-issue, homosexual clubs.

Therefore, it is possible that this will head into a court battle between the Catholic Church and Dalton McGuinty.  Please take the time to encourage Ontario's bishops to stand firm against the government, and if necessary, to tell Premier McGuinty, "We'll see you in court". Encourage our bishops to defend Catholic constitutional rights as guaranted in Section 93 of the Constitution Act, 1867.  Contact info for Ontario bishops can be found here.