I want to thank you for your prayers and activism on behalf of the preborn in New Brunswick. Your efforts are making a powerful impact, which is why I am writing today. I want you to know what we’ve accomplished thus far.

We don’t hear enough good news from the pro-life front lines, so I didn’t want you to miss this...

You may have heard some recent reports of the imminent closure of Clinic 554 – a preborn slaughterhouse in Fredericton, New Brunswick. This private, for-profit abortion mill has experienced financial woes over its entire 25 year history. They shut down once before (in 2014) due to financial instability, and they have been threatening to shut down yet again.

Last fall, Clinic 554 announced they would close down their gruesome business and put their building up for sale by the end of 2019. They demanded that the provincial government step in and provide taxpayer funding, which it had never done before. Pro-aborts from all across the country began to complain, and even the Trudeau liberals threatened repercussions if New Brunswick Premier, Blaine Higgs, refused to comply.

In response to all the pro-abort hype in the media, and the enormous pressure from the federal liberals and other left-wing leaders, Campaign Life Coalition launched a petition to encourage Premier Higgs to stand fast. On December 10th, we invited Canadians to start adding their names to our letter to the Premier, asking him to continue to reject any and all government bail-out money for preborn baby killers.

Within days, thousands of citizens had signed our petition. Then, on December 20th, I travelled to New Brunswick to rally with local pro-lifers and present over 2,200 names to the Premier’s office. 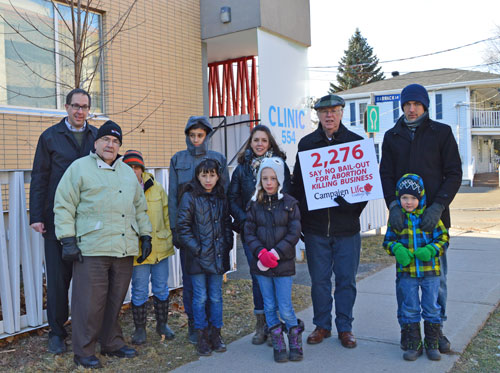 December 31st came and went. No bail-out was offered. The Premier stood firm. However, somehow, someway, Clinic 554 continued to operate – continued to kill – and their building did not go up for sale.

Pressure from the Trudeau liberals only increased in the new year as $140,216 in federal health care funding was withheld from the people of New Brunswick over of the issue of Clinic 554. Prime Minister Trudeau, in a clear abuse of power, sought to force Premier Higgs to bail-out this failed for-profit abortion business, and he was prepared to make all New Brunswickers suffer as a result.

However, in a providential turn of events, partly due to the COVID-19 outbreak, and partly due to our ongoing efforts, the Trudeau liberals have decided to restore the $140,216 funding cut. Praise God!

Now, once again, we are seeing new reports in the media decrying the “imminent closure” of Clinic 554. In this one-sided puff piece from MacLean’s, the writer laments that this supposedly selfless and caring abortuary will soon close down and its building sold.

However, this latest report from Clinic 554 (which, I will remind you, was supposed to have closed four months ago), may be just one more shameless attempt to gain publicity and keep up the pressure on the Higgs government.

That being said, I would ask you to take a moment to send a note of thanks to Premier Higgs. Please thank him for standing firm against taxpayer funding for that private, for-profit, preborn-killing business – Clinic 554. Please let him know how much you appreciate and respect his principled stand for life. You can reach him by phone or email below:

Good news is hard to come by in the pro-life battle, but when we do find it, we need to give thanks and encourage those who have shown a measure of courage and commitment – as Premier Higgs has. Let’s be sure to send him an email expressing our gratitude for refusing to bail out Clinic 554.

P.S. You may continue to sign our petition to Premier Higgs, asking him to NOT bail out Clinic 554. Here’s the link: https://www.campaignlifecoalition.com/petition/id/31/page/188