Although some mail-in ballots are still being counted and a few races are still in contention, it appears that the new parliament will look almost exactly like the old parliament.

It can be argued that Justin Trudeau came out of this election with a damaged reputation because the public understands he called an unnecessary election - and wasted $600 million on it -  for no other reason than to capitalize on polls which suggested that in a snap election, he’d win a majority. Which he failed to do.

However, Erin O’Toole is the leader who suffered the greatest damage, by far.

He blundered away what I believe should have been an easy victory that would have resulted in 156 Conservative seats compared to just 130 for the Liberals.

Down below, I’ll provide the math to back up that claim, and demonstrate that O’Toole helped Trudeau win by driving enough of his base into the waiting arms of Maxime Bernier, while demotivating many others such that they stayed home on E-day.

Failed strategy by a failed Leader

O’Toole moved to the left and alienated his party’s socially conservative base, along with fiscal and democratic conservatives, as a deliberate strategy which he claimed was necessary to finally defeat the Liberals.

He explained this leftward lurch, stating: “I told Conservatives that our party needed the courage to change because Canada has changed”.  In plain English, he meant, “To beat the Liberals, we have to become liberal like them”.

Throughout the campaign, O’Toole insulted the social conservatives whom he courted during the Conservative Party of Canada (CPC) Leadership race, and who crowned him Leader.

He shamelessly promoted abortion, LGBTQ ideology, oppressive lockdowns, and liberty-destroying vaccine passports which coerce Canadians who conscientiously object to taking the jabs for a variety of reasons.

He betrayed the party’s large socon base during the campaign trail when he flip-flopped on his previous pledge to protect conscience rights for healthcare workers to not have to perform nor refer patients for abortion or euthanasia.  In doing so, he even contradicted official CPC policy as passed by grassroots members at a recent convention.

After just the slightest bit of pressure from the liberal media, he reversed his position and said that he’d require doctors to refer for abortion and euthanasia, not appearing to understand nor care, what a catastrophic violation of conscience that would represent.

O’Toole even angered fiscal conservatives by announcing his own job-killing carbon tax after repeatedly promising to repeal Justin Trudeau’s!

What was the result of O’Toole’s left-wing, Liberal-lite election strategy? Did it attract more votes to the CPC and bring about the victory he promised?

No. The exact opposite occurred.

Facing a Prime Minister Trudeau who was personally unpopular, and a public that was ready for change after 6 years of scandal and mismanagement, O’Toole performed worse than Andrew Scheer did in 2019, losing two seats in the House of Commons. So much for leftism as a winning election strategy for Conservatives!

O’Toole’s Liberal-lite platform also resulted in a massive drop in the popular vote for the Conservative Party.

Maxime Bernier’s party saw enormous growth in this election, tripling the votes obtained by the PPC in 2019, increasing it from 1.6% of the popular vote to 5.1%.

What does it tell us that the popular vote for O’Toole’s Conservatives collapsed by roughly 710,00 votes while the PPC grew by approximately 548,000?

To me, it says that the majority of the PPC growth came from former Conservative voters abandoning ship and moving to a party that they perceived as better reflecting their values.

The reason for that was clearly because Bernier had a more truly conservative platform. He ran on:

If we assume that 70% - 80% of the PPC vote consisted of dejected Conservative voters with the rest being a mix of people who never voted before, plus some Liberals and Greens attracted to Bernier’s freedom platform, that would account for between 348,000 to 416,000 of the CPC’s 710,000 vote shrinkage.

I believe it’s reasonable to assume that these are largely people who stayed home on election day in 2021 because they were disgusted with O’Toole’s radical slide to the left, became despondent, and gave up on the political process. In short, O’Toole conducted voter suppression on his own base.

We can prove with certainty that at least 14 seats would have flipped to the Conservatives if O’Toole hadn’t driven this segment of the party’s base into the arms of Maxime Bernier. See the chart below listing the 14 ridings where a Conservative candidate narrowly lost and the PPC vote was strong.

For example, in Kitchener-Conestoga, Carlene Hawley, a pro-life CPC candidate, lost to the Liberal by a mere 194 votes. The PPC candidate, Kevin Dupuis (also a pro-lifer), got 3,641 votes. If we assume that just 70% of the PPC’s vote was former Conservative voters who felt betrayed by O’Toole, Hawley would have beat the Liberal by 2,355 votes. 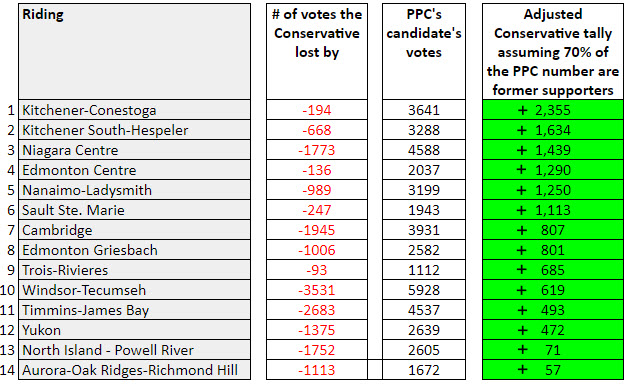 If these ridings alone had flipped blue, the seating arrangement in the House of Commons would now look like this, with the Liberals reduced to a much weaker minority:

Please don’t make the mistake of blaming these 14 Liberal seats on Maxime Bernier.

Erin O’Toole is who must take the full brunt of responsibility. It was the actions of the Conservative leader that caused this vote split. Had O’Toole come out with a platform similar to Bernier’s, even if it was softer or more nuanced to draw less ire from the media, all of these seats would have turned blue in my estimation.

O'Toole foolishly conducted voter supresssion on his own base

The table below shows that another 23 Liberal and NDP seats could have flipped to Conservatives if not for the combined factors of (a) defection to the PPC and, (b) voters sickened by O’Toole’s Liberal-lite policies not getting out of bed on election day.

Column D shows that after accounting for the Bernier effect by assuming a 70% switch back to the CPC if O’Toole had campaigned on a truly conservative platform, the local CPC candidate wouldn’t have lost by much. Column E provides the drop in voter turnout this election versus last, which in most cases, could easily bridge the gap to produce a Conservative win.

For example, in Thunder Bay-Rainy River, after adjusting for the PPC factor, the Conservative candidate, Adelina Pecchia, would’ve been behind the Liberal by just 143 votes.  But we observe that 1,168 voters who turned out in 2019 stayed home this election.  Of that 1,168, could there have been 144 people who previously voted Conservative, but didn’t this time as a result of O’Toole?  I think that’s very likely. 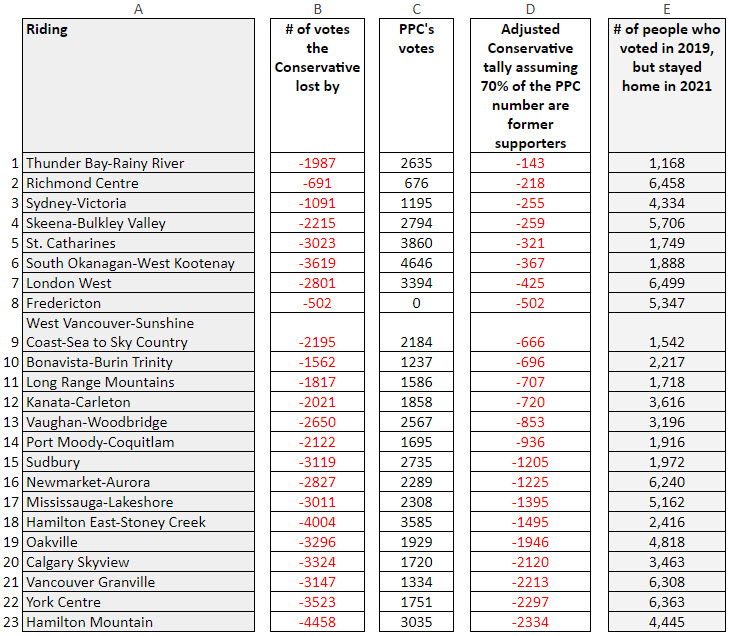 If we assume all 23 of the above ridings flipped blue, then the parliamentary standings would be as follows, giving the Conservatives a strong minority:

I’ve made the case that O’Toole helped Justin Trudeau win, and sabotaged his own sure victory by aping Liberal policy on abortion, LGBT identity politics, medical tyranny, societal segregation and more.

He doesn’t deserve to be leader because of his support for the child murder we call abortion. However, for all these other reasons I mentioned above, every Conservative Party member should want O’Toole gone.

Campaign Life Coalition was the first to call for his resignation on election night.  That was followed by a senior member of the CPC’s National Council, Bert Chen, launching a petition to “recall” O’Toole as leader, which, at the time of this writing has surpassed 2,700 signatures so far.

If the Conservative Party faithful wish to avoid an even greater vote-split with the PPC in the next election, which is what I believe will happen if O’Toole remains leader, and avoid having the Liberals come up the middle to win again, then they all need to get onboard with dumping O’Toole ASAP.

They need to acknowledge that the Conservative Party needs to select a new Leader who will motivate social, fiscal and democratic conservatives to come back to the fold.