“What our government is doing is just wrong,” said MP Leslyn Lewis (Haldimand-Norfolk) during the November 24 rally on Parliament Hill in support of pregnancy resource centers and other pro-life charities. The rally, titled Save Our Charities, was organized by Campaign Life Coalition (CLC). A replay of the event is available on CLC’s Facebook page here or on Instagram here. (Report continues below photo) 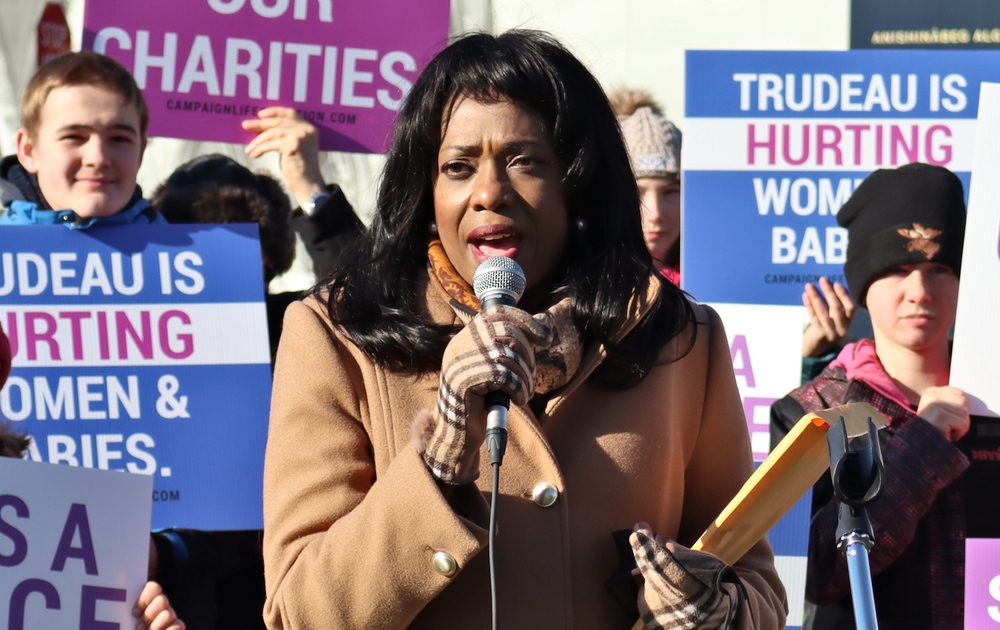 During the 2021 election, the Liberal Party issued a blanket condemnation of all pro-life groups across Canada, claiming in the Liberal Election Platform that “anti-choice organizations are actively working to spread misinformation about abortion, putting the health and safety of young people and vulnerable women at risk.”

Without providing any evidence to back up the claim, the party led by Trudeau promised that, if re-elected, it would “no longer provide charity status to anti-abortion organizations (for example, Crisis Pregnancy Centres) that provide dishonest counseling to women about their rights and about the options available to them at all stages of the pregnancy.”

Pro-life advocates strongly deny the allegation that Crisis Pregnancy Centres provide “dishonest counseling.” They view Trudeau’s promise as an effort to cripple the good work accomplished by pro-life organizations. Some have pointed out that without charity status, these pro-woman, life-affirming pregnancy centres may be forced to close. Many such centres will certainly struggle financially. In the end, this could mean less help for pregnant women in crisis who count on the approximately 150 pregnancy centres across Canada to be there for them in their time of need.

“So, once again, we have a Prime Minister here who is pre-determining what people's outcomes can be, which is entirely wrong,” she said at the rally, adding that Canadians’ freedoms are “being challenged on so many levels.”

“I do not agree with this Prime Minister, or his government, pre-determining who can get what kind of help when they are truly seeking support to be able to carry their babies forward,” she added. (Report continues below photo) 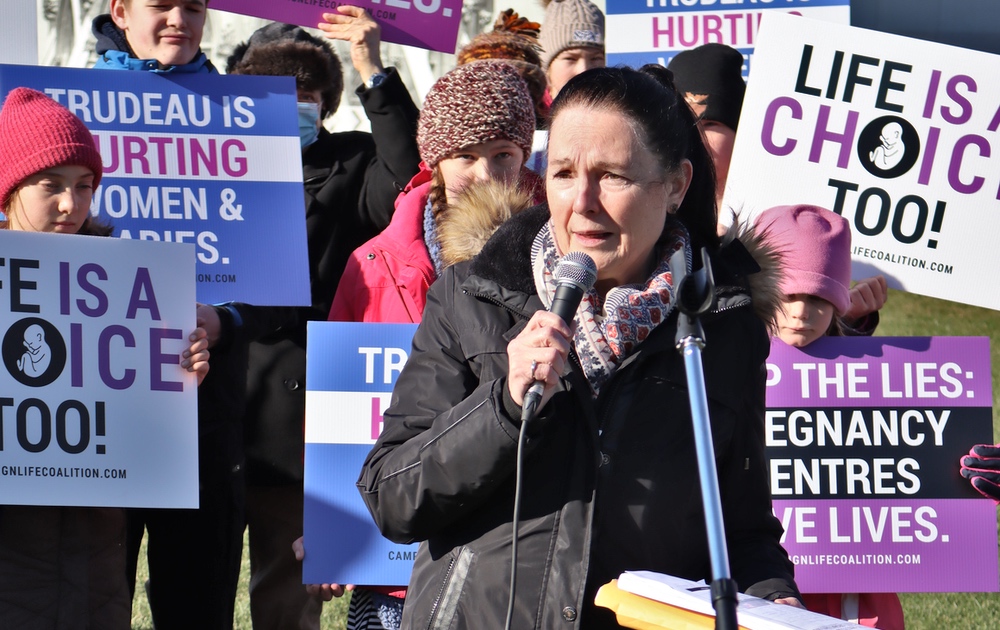 Lewis pointed out in her speech that there exists a “misconception” about what pregnancy resource centres actually do. She related how she went to one such centre in her own home town of Dunnville, Ontario and was grateful for the opportunity to see first-hand the amazing help provided to vulnerable women in need.

“And I witnessed even young men being trained on how to be good fathers. I witnessed parents and families learning about nutrition, good nutritional values, how to do homework with their children, how to make sure that their children have a balanced life that incorporates activities and health and wellness. And so, there's so much that is done at these pregnancy care centres,” she said.

Lewis ended her speech by telling an estimated 100 people who attended the rally that she would be personally sending a letter to Trudeau to “invite him out to the Dunnville Care Centre so that he can see exactly what that centre does and share that experience that I had.”

During the rally, CLC delivered a petition with over 14,000 signatures (10,000 online + 4,000 hand-signed) to each of the MPs. The petition asked all federally elected politicians to oppose any bill, motion, or regulatory policy that seeks to penalize pregnancy centres and other pro-life organizations in our country. (Report continues below photo)

“The politicisation of charitable status is unacceptable. You should not have to agree with all the government's positions in order to get charitable status in this country. And, that goes in both directions. The Liberals are playing with fire when they're doing this,” he said.

Viersen said that he and other pro-life MPs will be “fighting this threat to charitable status.”

“We'll fight that tooth and nail in the House of Commons,” he promised. (Report continues below photo) 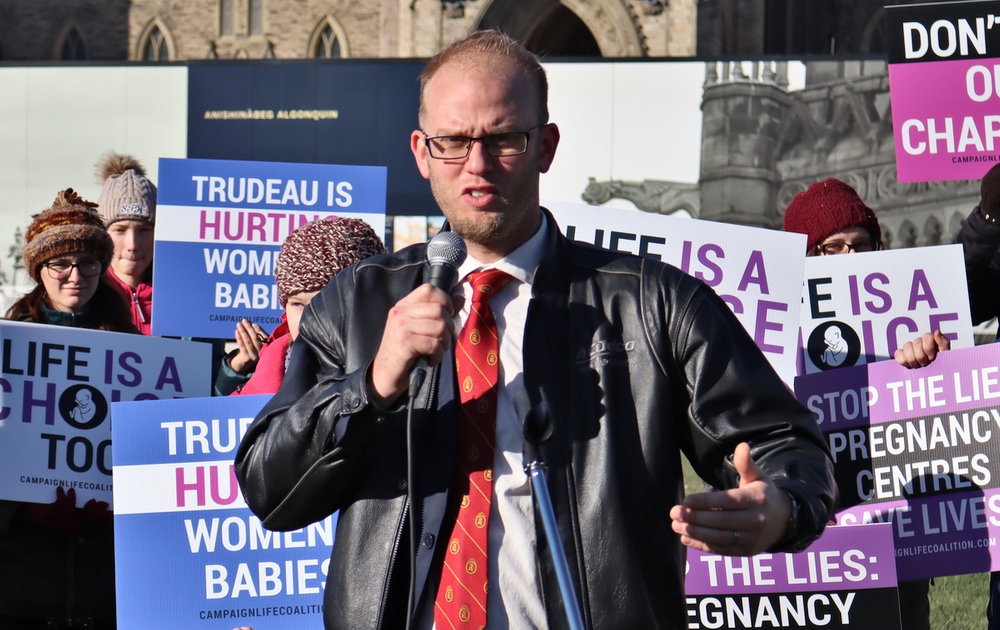 Also speaking at the event was the director of a pregnancy resource centre in southern Ontario.

“We serve unconditionally to anyone who needs our programmes and our services,” said Carol Butler, Executive Director of Haldimand Pregnancy Care & Family Centre in Dunnville, Ontario. “We support people from all walks of life with pre and post-natal support, parenting, relationships, miscarriage, and early infant loss support, and post-abortion support.”

“We also offer material support with baby clothes, formula, and food supplies for moms, and some equipment, thanks to the generosity of our community. For those struggling financially, this is very much appreciated by them,” she added. (Report continues below photo)

Butler said that so far in this year alone, the centre has handled over 700 client appointments and has run programs attended by almost 500 individuals in need of education. In that same timeframe, the center has also handed out over 1,500 baby-care items to women in need and fielded over 4,500 telephone calls and texts.

“There have been so many lies and false information about pregnancy centres over these last number of years,” Butler said. “We've invited the detractors to come to our centre and get to know us to find out what we do to support the vulnerable people in our communities.”

Butler ended her speech with an open invitation to Mr. Trudeau to come to the pregnancy resource centre in Dunnville to see for himself how much vulnerable women are helped.

“Before taking another step towards trying to revoke the charity status of our centres across the country, we're asking Mr. Trudeau to come and find out more about who we are and what we do. We're asking Mr. Trudeau to do his own research and not just listen to those who don't like us, spread hate, or don't believe in us helping our fellow citizens and communities across Canada.”