January 25, 2023 (Campaign Life Coalition) – I’ve decided to write a letter to the Prime Minister. It may be one of the most important letters I’ve penned in my entire life.

And, I’m not going to send it to the Prime Minister through the post office. I’m going to bring it to Ottawa and read it out loud, publicly, as I stand in front of our country’s Supreme Court. Then, I’m going to take the letter, walk over to Parliament, and deliver it by hand.

What’s in my letter? Click on the video below to find out more.

You see, January 28, 2023, marks 35 years since the Supreme Court of Canada’s ruling in the Morgentaler case which struck down the previous abortion law and left Canada a nation without any legal protection for preborn children.

Since that day, an estimated 3.4 million preborn babies have been tragically killed by abortion.

The Supreme Court offered Parliament the opportunity to pass legislation protecting life in the womb. This has yet to happen.

I’ve penned a letter to Prime Minister Trudeau of critical importance to every Canadian, born and unborn. It has everything to do with the 1988 Morgentaler decision and with the very future of our country.

I’d like to give you, dear friend, a little sneak peek of what’s in the letter. No one else has seen this yet. 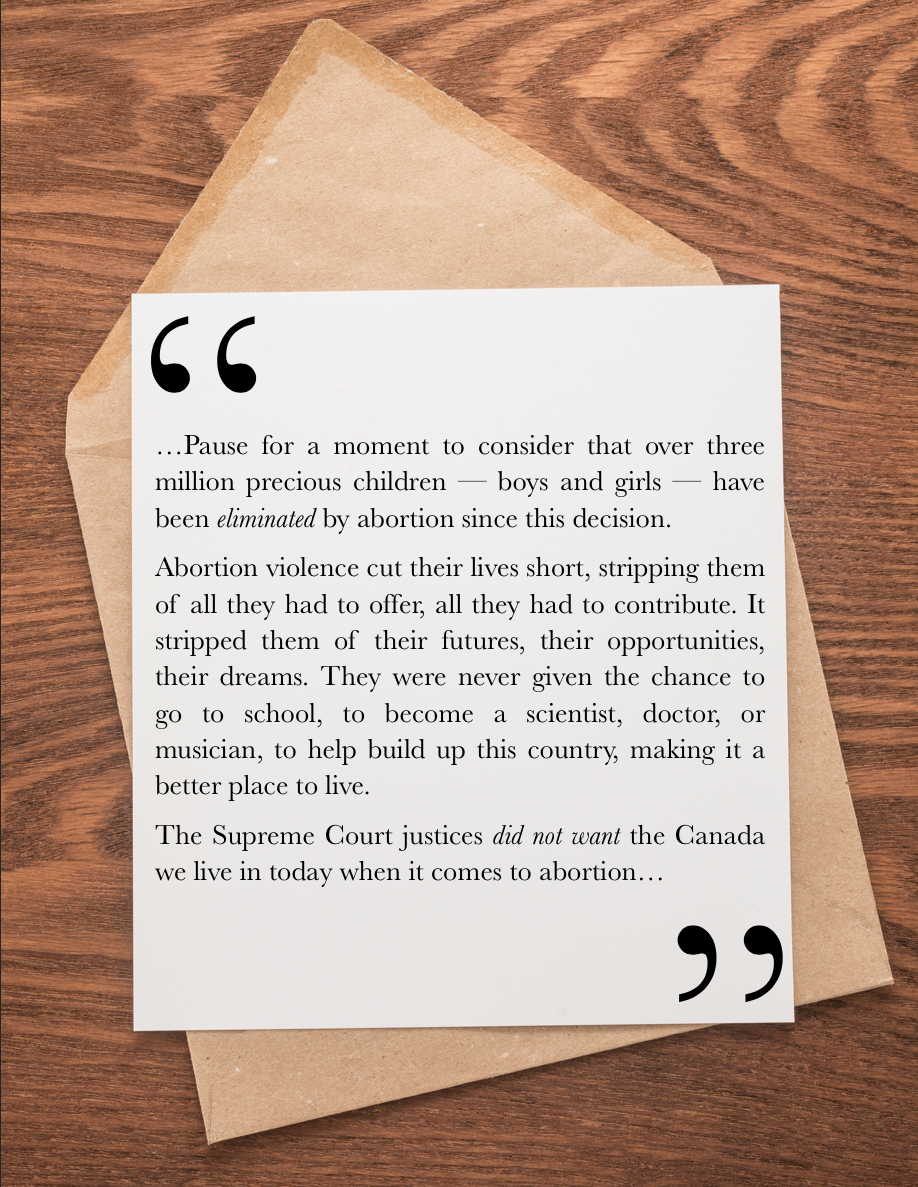 We’ll be holding a press conference and rally to mark this occasion on Thursday, January 26 at 10 AM local time in front of the Supreme Court building.

It’s there that I will reveal, for the first time, the full contents of my letter to the Prime Minister before delivering it by hand to Parliament.

If you live in Ottawa and the surrounding area, we’d love for you to attend the event and be part of what we’re doing. The more people we have attending, the better. It would show those in power that Canadians are still fighting for justice for preborn babies and that we'll never stop fighting until justice is delivered.

And, if you can’t make it to Ottawa, you can tune in and watch the event since we’ll be live-streaming it from our Facebook page here: https://www.facebook.com/CampaignLifeCoalition/. And, we'll be posting the full event on our YouTube page later on here: YouTube.com/CampaignLifeTV

If you are unable to attend the event but would like to participate in it in some way, we’re looking for help to defray the cost of running this. We’ve had to pay for travel to Ottawa, hotels, food, sound-gear rental, and printing of signs. The costs have added up pretty quickly. Any help would be greatly appreciated.

And, please pray for the success of the event.

Thank you for your prayers and support.