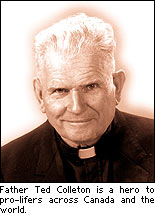 Fr. Ted Colleton passed away last evening at the age of 97 at La Salle Manor in Toronto, and he will be missed by pro-lifers in Canada and abroad.

Born and raised in Ireland, Fr. Ted was ordained a Catholic priest in the Spiritan (Holy Ghost) order in 1940, after which he spent 30 years in Kenya as a missionary before being personally expelled from the country by dictator Jomo Kenyatta in 1971. He came to Canada where he began a second career as a pro-life missionary and he spent more than 35 active years preaching the Good News without compromise.

He was a tireless defender of the unborn and fierce opponent of the Culture of Death and its symptoms: abortion, contraception, and euthanasia. He wrote hundreds of pro-life columns for The Interim newspaper for which he was a columnist for a quarter century and published three best-selling books: two collections of his columns and one autobiography. In the 1980s he was arrested for chaining closed the gates behind Henry Morgentaler’s then illegal abortion facility in Toronto, and people called him a “radical.” He embraced the term, entitling his collection of columns, “Yes, I’m a Radical,” and “I’m Still a Radical.”

He gave thousands of homilies that preached the Culture of Life. He appeared on television and radio to give interviews and spoke to pro-life and church groups from coast to coast. Fr. Ted said he spoke personally with 100,000 Canadians during his travels. It is estimated that he raised more than $1 million for the pro-life cause over 30 years.

Campaign Life Coalition National President Jim Hughes said he will miss his friend of three decades, with whom he talked several times a week. “He was a wonderful example, giving everything he had for the unborn and vulnerable. He never rested.” Hughes said that well into his 90s, Fr. Ted led a more active life than most people 30 years his junior. “He set the standard for us,” said Hughes.

We invite yout watch the tribute video below which was produced some years ago upon the retirement of Fr. Ted Colleton. This film tribute was aptly named, "The Lion in Winter".  Father Ted, may God bless you.