On Saturday August 25, the Conservative Party of Canada became more pro-life than it had been the day prior. Almost 2,000 CPC delegates gathered in Halifax for the party’s biennial convention and voted to adopt a total of eight socially conservative policy resolutions.

Theoretically, these policies are meant to form the basis of the next Conservative election platform, and to set the legislative/regulatory agenda for the Conservatives should they form government in 2019.

Campaign Life Coalition successfully organized pro-lifers and lobbied delegates at-large to turn the following great so-con resolutions into official Party policy that will be carried into the next election:

Top policy objective on abortion legislation remained out of reach

We came extremely close, but did not pass our top prize of deleting the existing pro-abortion policy in Article #65 which states:

“A Conservative Government will not support any legislation to regulate abortion.”

CLC had designed and printed an attractive postcard and put it in the hands of hundreds of delegates, asking them to vote YES to delete Article #65. 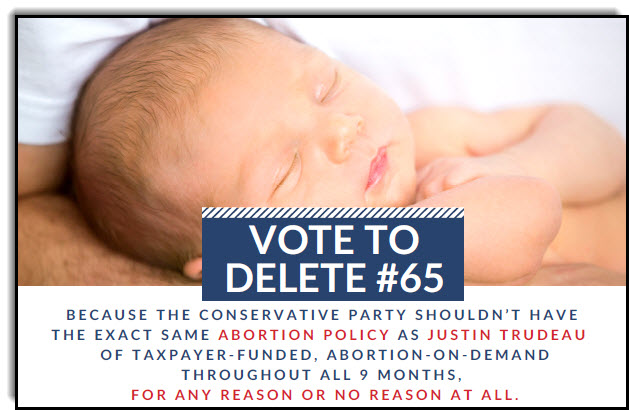 We also promoted the Delete 65 policy in our Voter Guide for Socon Delegates, which we distributed aggressively throughout the convention so as to help us pass the fourteen socially conservative policy resolutions that CLC endorsed.

Despite our best efforts and that of many CLC volunteers, the Delete 65 policy was narrowly defeated by a margin of 53% NO to 47% YES.  The difference was a mere 106 votes.

This close result produces a mixture of frustration and inspiration.  Had just 107 additional pro-lifers responded to our requests over the past 12 months to become Convention Delegates, this awful pro-abortion policy would have disappeared.

Coming so close but falling short is frustrating.

But seeing how easily within reach the goal is for the next convention in 2020, is inspiring.

The reason deleting Article 65 was so important is because consecutive Conservative Party Leaders, Harper and Scheer, have hidden behind that statement to justify “not re-opening the abortion debate”.

Additionally, #65 is not at all reflective of the beliefs of the party’s base which has significant discomfort with the current, taxpayer funded, abortion-on-demand, throughout all 9 months regime.

We observed just hours before the Plenary vote, that the Leader took steps to ensure the policy would be defeated.   According to Campaign Life’s Vice President, Jeff Gunnarson:

“We would’ve won the Delete 65 vote too, had the Leader not interfered in and manipulated the policy process by telling the Canadian Press hours before the vote, and sending a memo to MPs mere minutes before the Plenary started - that he would not re-open the abortion debate even if delegates voted to delete 65.”

“Scheer’s meddling intimidated enough delegates and MPs to cause its defeat.”

CLC obtained a copy of the memo sent from the Office of the Leader of the Opposition to Conservative MPs, which was time-stamped as being sent at 1:06 pm.  The Plenary meeting began at 1:30pm.  Surprise, surprise - during the debate on Deleting 65, the Deputy leader, MP Lisa Raitt, stood at the NO microphone making nonsensical arguments about the divisiveness of the abortion issue, even though the policy would simply make the party neutral on the question of abortion legislation, and would not commit the party to supporting legislation.  Raitt emphasized Sheer’s sentiments that the Party has no desire to re-open the abortion debate.

This act of sabotage by the Leader against a grassroots policy that was passed with broad support by members and EDAs across Canada was totally inappropriate. It violated the spirit, if not the letter, of the party’s constitution which states in Sect 13.1.1 that: “the policy process is at all times accountable to the members”.

Even before the convention, Campaign Life warned that Scheer would try to scuttle politically-incorrect policies, which we learned through sources in the party. Unfortunately, our sources were not wrong.

Shenanigans were also conducted in a different break out room the day prior, dealing with Economic policies, wherein the CPC Moderator apparently dragged out the debates to ensure that a politically-incorrect policy on ending Supply Management never even made it to a vote. 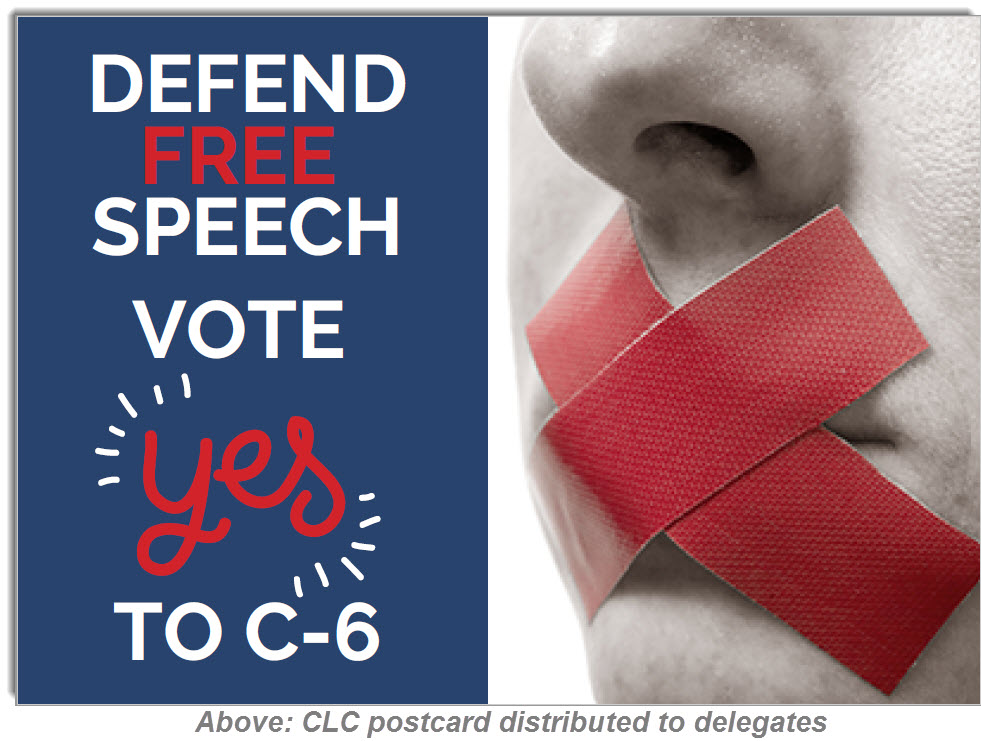 As we explained earlier, two great policies were passed on Compelled Speech and Free Speech.  However, there was yet another Free Speech policy (#C-6) that was actually a higher priority for CLC.

In fact, after Delete 65, it was our second highest policy objective.  It was to be added to the DEMOCRATIC REFORM section of the policy handbook, as follows:

The Conservative Party believes free speech is necessary for democracies to remain free. Therefore, we support:

There was an organized effort to defeat it by red tories, including by the Conservative MP for Elgin-Middlesex-London, Karen Vecchio, who spoke against the policy from the microphone.  The resolution lost by a margin of 438 No to 133 Yes votes due to the fact that so-con delegates were stuck in a different room to vote on the Delete 65.

We dared not leave the latter because Delete 65 was our top policy objective, so we made the decision to sacrifice the free speech policy and not leave the room. Of course, that doomed the former to defeat.

We don’t think it was a coincidence that the party establishment placed the free speech resolution up for debate on the agenda at almost exactly the same time as the Delete 65 resolution. The party may have been hoping that so-con delegates would split up between the two rooms so that both policies would be defeated. Fortunately, we didn’t fall for that trick.

Campaign Life supported an important resolution calling pornography “a public health risk” and which sought to “prevent pornography exposure and addiction, to develop recovery programs, and to educate society on the harms of pornography.

We anticipated this would easily pass with overwhelming support, but were genuinely shocked to see it get shot down by a margin of 53% Nays to 47% Yeas.

The progressives who spoke against it, distorted and lied about the intent of the policy, suggesting that it would criminalize the viewing of pornography by adults. That was not at all true. The policy would merely help educate the public about pornography’s harms, and try to protect children. Nonetheless, the distortions swayed enough of the room to keep it from passing.

Another small, but valuable resolution that CLC supported – and was passed Saturday - is an amendment to the party’s constitution which deleted the words “progressive social policy” from the list of “Party Principles”.

Given that anywhere between 40% - 70% of the CPC’s base is made up of social conservatives, it was grossly disrespectful to many members to suggest that liberal social policy is a fundamental party principle. This amendment made the policy declaration more truly conservative, and we’re grateful to the EDAs of Sherwood Park-Fort Saskatchewan and Scarborough Centre for submitting it.

These eight policy victories, plus the few constitutional amendments wins must not be seen in isolation. They’re even more significant because they build on CLC’s wins from the previous biennial Policy Convention in Vancouver, back in 2016.  There, we helped pass:

The cumulative effect of the last two conventions has made the CPC Policy Platform much more socially conservative.

Finally, we’re pleased to report that we had good success in electing National Council Candidates. The Conservative Party’s National Councilors are the individuals who run the party in between elections, and who have the power to disqualify nomination candidates for any reason at all. They can fire candidates even after they’ve been democratically-nominated by EDA members, in the middle of an election.

Both of these powers have been abused over the years to discriminate against Conservative candidates who are pro-life and pro-traditional marriage.

National Councilors also have the power to fix the broken policy development process in which the National Policy Committee often scuttles grassroots policy resolutions that passed with broad support, but which are opposed by the Leader’s office for fear of name-calling by the liberal media.

By electing principled National Councilors who are accountable to the members who elected them, we hope to put an end to all of this staggering corruption, which insults democracy.

ONTARIO ELECTION RESULT
There were four seats for Ontario National Councilor up for grabs in Ontario.  The good news is that all four seats were won by candidates whom Campaign Life had endorsed as supportable.

Unfortunately our #1 and #2 ranks, Mark Dotzert and Sarah Chung, respectively, didn’t make it. However, the four who won: Chen, Chappelle, Van Gaalen and Barzilay, all pledged they would fight against any attempts to block or fire candidates for being pro-life or pro-traditional marriage. They all promised to do what they can to ensure the policy process is transparent, at all times accountable to members, owned by the members, and free from interference by the party or Leader’s office.

QUEBEC ELECTION RESULT
There were three seats up for grabs in Quebec for National Councilor positions. We had a clean sweep! All three of our endorsed candidates won – Valerie Assouline, Emile Mercier, and Jimmy Yu.

We need to start preparing for 2020’s policy convention right away. As we’ve witnessed in Halifax, success is possible, but it requires Campaign Life Coalition working for nearly the entire 2 years with CPC activists, leading up to the next convention, to ensure pro-life party members are organized and in position.

We have an immediate need for pro-life members of the party to step forward, and help us with some specific tasks. We’re hoping social conservatives will step forward from every province and territory.

Contact us by email, and we’ll explain what’s involved.

It was very costly for CLC to have our team of six staff plus volunteers at the Halifax convention for so many days, and we’ve accumulated a lot of unfinanced debt as a result.

Before the convention, we created a WonderWe crowdfunding page which is still only at 65% of our $15,000 goal.  As you’ve seen, Campaign Life has done amazing things in Halifax with the donations entrusted to us.

This work is so important and we need to be able to pay for it. Would you please make a financial donation to help reach our $15,000 goal?

Thank you and God bless,