News > School board victory: 4-to-1 vote against transgender ideology

School board victory: 4-to-1 vote against transgender ideology

Last night, trustees at the Toronto Catholic District School Board's subcommittee meeting voted 4-to-1 to reject the anti-Christian theories of "Gender Identity" and "Gender Expression".  A motion had been put forward to add these controversial ideologies to the TCDSB's official Code of Conduct.

Praise be to God and His Divine Son, Jesus Christ! The Christian faith has been preserved, at least for now, against a demonic assault on the very image of God in creation.

Here's how the five trustees on the "Living our Catholic Values" subcommittee voted: 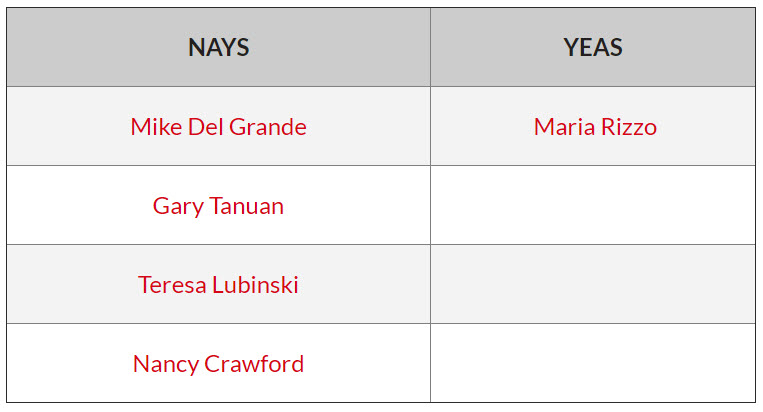 Please send a "thank you" message to each of the good trustees for taking a stand for truth and authentic Christian teaching. You can email them by clicking on their names below:

With regard to Maria Rizzo, the sole trustee who voted to attack the image of God in Creation and to take such a flagrant stand against the Holy Bible and Catholic doctrine on sexuality, a message must also be sent.

Faithful Catholics and non-Catholics with children in the separate system cannot stand for any more of her rebellion against Christian anthropology of the human person and her evil actions to undermine Church doctrine on sexual morality.

Rizzo is unfit to serve as a steward and "protector" of the Catholic faith, a fiduciary duty that is inherent in the role of Catholic trustee.

Therefore, please email Maria Rizzo and send her a message telling her in plain language:

"You have betrayed the Catholic Church by voting in favour of Gender Identity Theory, an ideology condemned by Pope Francis as 'demonic'.  Please resign your trustee seat, immediately.  It is clear that your beliefs are not aligned with those of the Catholic Church. Be true to yourself and leave, immediately, OR apologize for voting in opposition to Church Teaching, and vow to vote against Gender Identity Theory in subsequent meetings."

Then, sign our new petition demanding that Rizzo resign from the board of Trustees, and share it far and wide.

The Youth Coordinator of Campaign Life Coalition, Josie Luetke, who happens to be Catholic, gave a 3 minute presentation to the trustees at last night's meeting.

I hate to brag, but the truth is that Josie crushed it! Both in her speech, and in her responses to the follow-up questions by trustees.

Below is a transcript of Josie's delegate presentation to the Board:

I am here today to ask the board not to add “gender identity” and “gender expression” to its Code of Conduct.

Christian anthropology has at its core Genesis 1:27: “So God created man in His own image; in the image of God He created him; male and female He created them.” Moreover, the Catechism of the Catholic Church recognizes man as “a composite being, spirit and body.” The rejection of one’s material body—one’s biological reality—is a rejection not just of scientific fact, but also a rejection of self. As Catholics, we cannot condone this or any rejection of our human, sexual natures.

I am well aware that you are under intense pressure to adopt the deceptive language of “gender identity” and “expression,” but doing so is not a neutral act. It will cause harm to youth.

Firstly, gender-confused children need to be reaffirmed in their biological sex, not encouraged in their misperception. Those taking puberty blockers or cross-sex hormones often face serious side effects including sterility and poor bone development. According to Debra Soh, who holds a PhD in sexual neuroscience, many of these children—estimates vary from 61-88 per cent-- would otherwise simply outgrow their dysphoria, sometimes with the aid of psychotherapy. Indeed, we are also seeing an increasing number of individuals express regret over their transition.

Secondly, the more credence we give to the concepts of gender identity and expression, the more risk we subject women and girls to. Currently, a male can walk right out of a men’s washroom or change room and into a girl’s washroom or change room, and nobody can stop him from doing so; he can simply claim that he now identifies as a woman, and thanks to the ambiguity that “gender expression” introduces, his expression of his supposed womanhood can be identical to a typical masculine appearance. To be clear, I’m not saying that trans people are predators. I’m saying “gender identity” and “gender expression” have been and will continue to be weaponized by predators, regardless of their actual gender identities, and this is a problem we should be addressing, not aggravating, as we would be if “gender identity” and “gender expression” are added to the Code of Conduct.

Most importantly, our principal concern should be the truth, and it is to it that we owe our allegiance, not to the Ontario Human Rights Commission. As John 8:32 prescribes, “the truth will set you free.”

Please resist any attempt, no matter how well-intentioned, to legitimize the fabricated concepts of “gender identity” and “gender expression.” Thank you very much for your consideration.

To watch the video of Josie's presentation, check out her CLC Youth blog about the meeting, here.

As I alluded to from the outset, this 4-to-1 victory at the committee level is only temporary.  In order to keep the madness of transgender ideology out of Catholic schools, it must be rejected by a vote of the whole board at two subsequent meetings.

The first of these two meetings is scheduled for Thursday, December 5th at 7:00pm. It will be a larger standing committee called "The Student Achievement" committee, on which all 12 trustees get to vote, not just the 5 from last night's meeting. It will be held at the Catholic Education Centre, 80 Sheppard Ave. E., North York, ON.  Our goal must be to get 7 votes to reject the anti-Christian ideologies of Gender Identity and Gender Expression.

The December 5th vote is expected to represent a final decision by the TCDSB.

However, depending on whether certain rules get triggered, the question could potentially be put to another vote at the monthly, regular board meeting on Thursday, December 12th at 7:00pm. If so, it'll once again be at the Catholic Education Centre, 80 Sheppard Ave. E., North York, ON.  This is where we must have 7 votes to win a majority.

Mainstream news media at the CBC, CTV, The Star, etc. are embedded political activists of the radical left-wing in this country. They hate biblical teaching with a passion, and abuse their roles as journalists in order to influence, nay, to dictate, public policy to elected officials.

The biased media has done this for decades on every moral and religious issue, from abortion to euthanasia to the definition of marriage to gay pride clubs in schools, and countless other issues.

The left wing reporters at the CBC and elsewhere are not content to merely "report" the news. They want to create the news and determine its outcome. In this sense, the CBC, Star and others are more liberal-political-activists than true "journalists".

We've studied the media for decades, and we know exactly what they'll do next. Their strategy is simple. It's the same thing they've done in every other culture war battle.

At this very moment, reporters are colluding with LGBT-activist organizations, and also with "the enemies within", dissidents who pretend to be Catholic but are merely there as infiltrators to weaken the Church from the inside.

Together with these actors, the media is right now planning its roll-out of a non-stop torrent of daily news articles, columns and reports that will number in the dozens if not hundreds, leading up to the final December 12th vote.

This torrent of hate will be intense and aimed at the Trustees, but also at the Church.

Trustees will be told they have all manner of mental infirmity - transphobia, homophobia, etc.  The media will publish the opinion of "experts" and "Catholics" who will smear the Church and the trustees as "bigoted" and "hateful", which of course is a lie.

The media will cite totally un-verified and uncorroborated allegations by people who identify as transgender, their activist parents, and from gay pride organizations, claiming that "transgender" kids are at risk of suicide and persecution if Toronto's Catholic schools don't let boys dress as girls, and if little Johnny can't be called Lucy. These sensational assertions will be untrue, of course.

The goal of this vitriolic hate campaign is to so inundate trustees with so much hate, that they will give up the fight. To get them to so wish the media attacks would stop, that they will vote to accept Gender Identity ideology.  The media knows this strategy has always worked before, so it's counting on it working again.

The reason we're explaining this, is so that you know what's coming next. And so that you can redouble your lobbying efforts to the trustees and Cardinal Collins, so that they are not intimidated when the carefully orchestrated, fake news, media campaign hits.

Please encourage Cardinal Thomas Collins to make a public statement which urges the Trustees to vote against adding Gender Identity Theory, by signing our petition, here.

If you live in Toronto, you can encourage your local TCDSB trustee to vote the right way on December 5th and December 12th by using our super easy, Action Alert Email campaign by clicking here.  If you don't live in Toronto, please share the link with someone who does.

Refuting the argument that "Trustees must follow the law!"

Anyone who claims that the Toronto Catholic School Board has no choice but to adopt the anti-Christian theory of "Gender Identity", just because provincial regulations mandate it, or because the Ontario Human Right Commission is pushing it, is lying, or ignorant of the law.

No, school trustees do NOT have to obey. It’s categorically false to suggest they do. To the contrary:

a) Section 93 of the Constitution Act empowers the diocesan bishop and/or any Catholic board to reject any law or regulation that adversely affects the content of faith and morals.

c) The Supreme Court of Canada has twice upheld the denominational rights of Catholic Schools in Ontario as “absolute” and as being immune to a Charter challenge, as affirmed in the two legal opinions by constitutional lawyer Michael G. Osborne, and by Catholic lawyer, Geoff Cauchi.

d) The Education Act itself, in Section 230.19.1, affirms the absolute right of Catholic schools to govern itself free of interference by the Minister of Education in matters relating to faith and morals. As per Section 230.19.1:
“Nothing in this Part authorizes the Minister to interfere with or control, (a) the denominational aspects of a Roman Catholic board”.

f) The Education Act itself, in Section 264.1, states that: “It is the duty of a teacher…. to inculcate by precept and example respect for religion and the principles of Judaeo-Christian morality”.

It cannot be any more clear that both the Bishop of the Diocese, and the School Board, each have the absolute right to reject both the Education Ministry's request to add "Gender Identity" and "Gender Expression", and the kangaroo court OHRC's belligerent but empty threats.

This is a serious battle so please continue to stand with Campaign Life Coalition and other parental rights advocates who are protecting our children from the ideological Gender Theory assault on truth, reason and religion.

If we do not succeed in getting the trustees to totally reject Gender Identity Ideology, the TCDSB will cease to be Catholic. Its Christian identity will have been thoroughly destroyed and its reason for continued existence as a Separate school board will be no more.