News > Asking the Archbishop to speak up for our kids

Asking the Archbishop to speak up for our kids

Total domination. That seems to be what the Gender Ideologues want.

The LGBT lobby, together with their mainstream media and leftist political allies, are pushing hard and fast to secure the dominance of Gender Theory in every area of our society. They understand better than most that this one ideology has enormous power to displace our traditional values and uproot the Christian foundations of our civilization.

Instead of recognizing that man and woman are created in God’s image (and thus accountable to Him), Gender Ideology asserts that we can create ourselves in our own image. We can choose our own “gender identity” and “gender expression”, and tell our Creator to simply shove off.

It is truly “demonic,” as Pope Francis himself admits.

That is why, I believe, the LGBT lobby is so keen on brainwashing our children and our grandchildren. Our children are our future – the future of this nation! Capture their minds, and you have captured the future.

Last week, at the Toronto Catholic District School Board – one of the largest boards in Canada with over 90,000 students – a motion was brought forward to add the terms “gender identity” and “gender expression” to the official Code of Conduct.

This motion, if adopted, will have the effect of entrenching Gender Ideology and Transgenderism in every single Catholic elementary and secondary school across Toronto. It would permit and promote:

Of course, we would also expect this decision to produce a ripple effect across the country in other Catholic school boards. Plus it would be yet another blow to the broader Christian community.

This poses a serious threat to our values and beliefs, and a grave danger to our children.

Thankfully, in an initial vote on October 30th, four out of five Catholic trustees wisely chose to reject the motion. Only one person, pro-LGBT trustee Maria Rizzo, voted to oppose traditional Catholic teaching in favour of Transgenderism for kids.

We are holding Ms. Rizzo to account in our petition calling for her resignation, which you can sign at the bottom of this page.

There will be at least one more vote on the Gender Theory motion, coming up on December 5th. At that time, the entire Board of Trustees will vote, and a final decision could be made. We need to make sure that Transgenderism is soundly defeated at that vote!

Unfortunately, there is enormous pressure being placed on trustees by the pro-LGBT lobby, the media, and the political Left. The Toronto Star and CBC are already on the attack. We need to encourage trustees to do the right thing and stand up to this secular and satanic pressure.

You can help us reach out to trustees by sending an Action Alert Email – just click the button at the bottom of this page.

We, at Campaign Life Coalition, are also reaching out to His Eminence, Cardinal Thomas Collins, Archbishop of Toronto. Cardinal Collins has the authority and power to direct trustees to vote according to orthodox Catholic teaching. He also has the moral and spiritual influence to guide the terms of discussion and sway the thinking of the entire Catholic community.

That is why we launched a petition to Cardinal Collins urging him to make a public statement to direct Catholic trustees to oppose Gender Ideology in the Code of Conduct. A word from him will make all the difference.

Just yesterday, we delivered 1,915 signatures from that petition to the Cardinal’s office. CLC Campaigns Manager David Cooke, along with CLC Youth Co-ordinator Josie Luetke, presented those signatures in person at the Diocesan office at the corner of Yonge St. and Shaftesbury Ave. in Toronto. 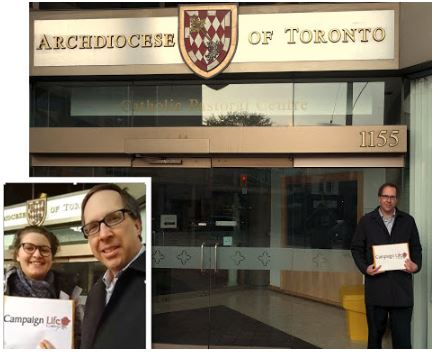 We are hoping and praying that the Cardinal will act promptly – that he will speak out in support of Christian doctrine, scientific reality, and for the sake of our children. Our kids need to be protected from those who would confuse and abuse them.

If you have not already signed our petition to the Cardinal, you can do so below.