UPDATE:  This page was originally set up to help members of the CPC save democracy in their party, by lobbying the party's National Council members to re-instate Jim Karahalios' candidacy after he was illegitimately removed from the ballot by the corrupt, red Tory-dominated LEOC and DRAC committees. The disqualification of Karahalios was rightly seen as an attempt by the red Tory establishment swamp to rig the leadership race in favour O'Toole & MacKay.

However, on March 26th, LEOC made yet another manouever which appears designed to further rig the election in favour of the more well-known candidates, O'Toole and MacKay. LEOC announced that all campaigning and fundraising by candidates is hereby suspended for 5 weeks... without also promising that voting would likewise be delayed!  According to an analysis by CPC Leadership candidate Derek Sloan, the party's announcement appears to be an attempt to prematurely end the debate and discussion portion of the race in which grassroots CPC members get to learn about each candidates, but to carry on with the original plan of having voting by mail-in ballot begin in late may and ended in late June.  Of course, this means that Leslyn Lewis, Derek Sloan (and Jim Karahalios presuming he's reinstated) will have no opportunity to present their policies or ideas to grassroots members before voting begins and ends. In essence, it's a red Tory coup attempt!  Further down this web page, you will find a listing with the names and email addresses of all 20 National Council members. Please email all of them and demand that voting be delayed until after the Wuhan Virus crisis is over... and to reinstate Jim Karahalios.

Jim Karahalios has now followed Richard Decarie in being disqualified for saying things that the socially liberal red Tory establishment didn't like.

Whereas Decarie was black-balled for saying something politically incorrect about the homosexual lifestyle, Karalios has been ousted for opposing Islamic Sharia Law. 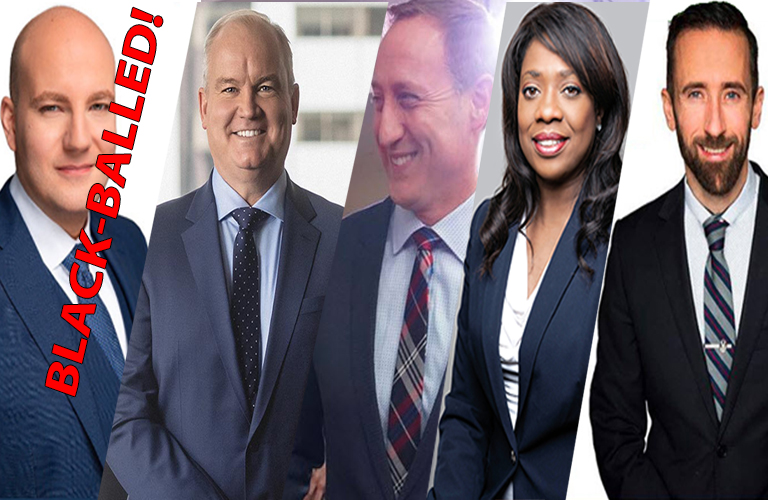 As our press release states, we are very pleased that half of the final candidates will be social conservatives (Derek Sloan & Leslyn Lewis) who met the $300K entry fee and 3,000 signature requirement. However, that's not good enough.

There should be three socon candidates out of the final five, on the ballot. They all followed the rules and earned their spot, including Karahalios.

We cannot sit idly by as a handful of corrupt progressives on LEOC destroy democracy and rob grassroots party members of the right to vote for the leadership candidate of their choice.

Therefore, after reading the CLC press release (see bottom of this email or here), please enact the following Action Plan to demand from the Conservative Party's National Councilors that they override LEOC and reinstate Karahalios's candidacy.

#2. Express your outrage to CPC headquarters by submitting an online comment here: https://www.conservative.ca/contact/

#4. Complain to your Conservative MP, if you have one in your riding. Look it up here with your postal code: https://www.campaignlifecoalition.com/find-your-elected-representative?

#5. When the CPC next contacts you to request a donation, tell them you won't give a nickel until Karahalios is reinstated as a candidate.

Toronto, March 20, 2020 – This morning, Campaign Life Coalition (CLC) posted on social media its congratulations to Jim Karahalios, Leslyn Lewis and MP Derek Sloan for hitting the 3,000 signature and $300,000 entry fee requirements to becoming official candidates in the Conservative Party of Canada (CPC) leadership race. Pro-life Conservatives across the country had been elated throughout the day Friday with the news that three out of what would likely be five final candidates on the ballot, were out-and proud-pro-lifers.

However, by Friday afternoon, the celebratory mood turned to outrage, after CLC learned from a reliable party source, that the CPC’s Leadership Election Organizing Committee (LEOC), had disqualified one of the three endorsed candidates. Jim Karahalios, the most outspoken critic of the red Tory establishment “swamp”, has been disqualified.

“This is an outrage!” said Jeff Gunnarson, National President of Campaign Life Coalition. “Thousands of our supporters answered our call to sign nomination papers and donate towards the Karahalios, Lewis and Sloan campaigns. Even though the barriers to entry were clearly designed by LEOC to keep out grassroots, non-establishment individuals like Jim, we helped him and the other pro-life candidates overcome them with a strong and effective grassroots campaign, by marshalling thousands of supporters to sign their nomination forms and donate”.

“Jim raised the onerous $300K entry fee plus the 3,000 signatures. No one questions that he is a life-long, hard core Conservative – a true Conservative – heavily involved in the party for years, including serving on its National Policy Committee and as a past EDA President for Cambridge. And therefore, he has earned the right to be on the ballot. Accordingly, grassroots party members have a right to vote for him in this leadership race! Therefore, on behalf of thousands of grassroots party members, CLC demands that CPC National Council override LEOC, and reinstate Jim’s candidacy,” added Gunnarson.

“After the disgraced LEOC committee disqualified Richard Decarie over his traditional conservative beliefs about human sexuality, we won’t believe any excuse that little band of cheats comes out with to justify blocking a second social conservative,” said Jack Fonseca, Director of Political Operations for Campaign Life Coalition. “We know they’re liars, and can’t trust one word that comes out of their mouths. The red Tory establishment swamp has been working hard to drive social conservatives out of the party once and for all. Karahalios is the second scalp they’ve now claimed, not because he did anything wrong, but because his conservative beliefs are at odds with their liberal ones.”

“Although we’re very pleased that half the leadership candidates will be social conservatives who will be able to stand up for our values, that’s not good enough. It should be three out of five, and LEOC cannot be allowed to get away with this. We call upon every card-carrying Conservative to flood the party’s National Council members – which created this little committee of crooks and cheats – to demand they override LEOC’s egregious disqualification of a true blue Conservative, and to reinstate Jim Karahalios’ candidacy immediately,” added Fonseca.