Believe it or not, social conservatives had a pretty successful convention, In this comprehensive, post-convention analysis, we'll cover:

Overall, Campaign Life Coalition is very pleased with the results of the National Council elections. In fact, social conservatives have scored a big win.

With 7 or 8 on Council, out of 20, who can now work together as a larger voting bloc, CLC anticipates that the number of discriminatory disqualifications will fall dramatically compared to what we've been witnessing the past several years. This is great news that all pro-life, pro-family Conservatives should celebrate.

In Ontario in particular, the four seats for the province have been filled by very solid, pro-member candidates. And even more importantly, the O'Toole candidates and those with problematic stances were all blocked.

Although one of the four we endorsed for Ontario lost, incumbent Matthijs Van Gaalen who had a solid record of defending pro-life nomination candidates from disqualification, the positive news is that he was beaten by a solid pro-lifer, Kara Johnson.

We didn't endorse Kara this time around, in part because we deemed the risk of vote-splitting and allowing an O'Toole (or otherwise hostile) candidate to win was just too high, and also because the three incumbents had strong records of opposing the unjust disqualification of candidates just because of their religious beliefs. However, we're very happy for Kara to be on Council and know she will defend SoCon candidates' rights just as she promised during the campaign.

Likewise in BC, we endorsed pro-lifer Larry Gray over Mani Fallon. Mani won, but we always said that she was an acceptable candidate in whom we'd be well pleased.

Here is a listing of all the pro-member, pro-democracy winners: 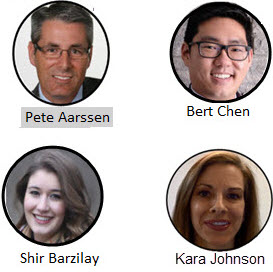 The eighth potentially beneficial candidate who was elected is a woman named Amber Ruddy in Alberta. CLC was unable to interview her during the campaign, however, she told another organization that she is pro-life. Hopefully, Amber will also be a reliable, pro-grassroots vote on Council.

We wish to thank the CLC-endorsed candidates who did not win: Patrick Hanlon (NL), Matthijs Van Gaalen (ON), Gordon Elliott (AB), Pam Davidson (AB) and Larry Gray (BC), .

We also wish to thank Richard Decarie and a second pro-life, pro-family candidate (who wishes to name anonymous) who tried to run for two out of the three Quebec seats for National Council. They were cheated out of running for National Council by the Executive Director, Janet Dorey, and the Party's Returning Officer, Wayne Benson, who claimed the two men had submitted their applications late. 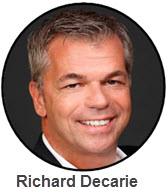 This absurd claim by CPC officials was made in the face of proof positive that the applicants had submitted their documentation on time, which they supplied in a notarized affidavit sent with their appeal of the decision, signed by the courier who hand delivered it to a CPC staffer at 4:06pm, well before the 5:00pm deadline.The affidavit included time-stamped emails and photographic proof that their paperwork had been submitted before the deadline.

Finally, we wish to congratulate Ghada Melek, a strong social conservative who fought back against the party's disqualification of her application to run for National Council by taking the party to court....and winning! The judge ordered the party to her name on the ballot. 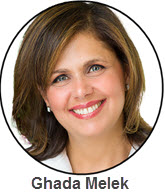 It gave the party swamp a black eye and is likely to save many a social conservative from being disqualified in the future by setting a precedent that the party can be held to account when it treats candidates unfairly.

As we've explained in previous communications, the red Tory party establishment gerrymandered the policy process on the Ideas Lab in order to supress the 18 or so socially-conservative policies which had significant EDA support on the Ideas Lab voting platform. Nonetheless, two strong pro-life policies and an excellent free speech policy managed to squeak through.  We're pleased to tell you all of those policies were easily passed by a majority of Delegates. Now, they're official party policy!

The first of the pro-life wins was a policy that commits a Conservative government to promoting adoption as a loving choice by implementing a National Adoption Strategy. It passed with 82% support. The graphic below shows the vote breakout along with the wording of what will go into the party's official Policy Declaration. 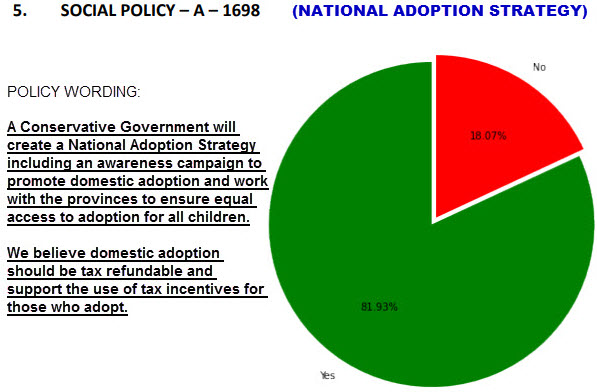 This was a nice prize which can help to advance a culture of life. An effective and properly financed federal adoption awareness campaign could significantly reduce the number of abortions in Canada.

Another pro-life policy resolution which passed with 75% of Delegate votes was a statement of principal against all euthanasia and assisted suicide. See info graphic below. 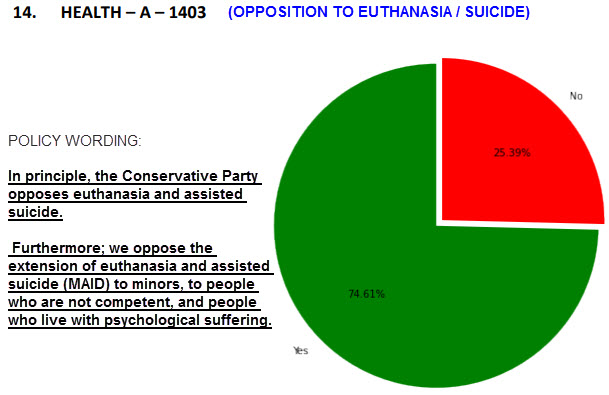 In light of the ongoing assault on free speech and the censorship by social media, we're very pleased that our Delegates were able to help pass a strong policy that commits a Conservative government to stripping universities that don't defend free speech of their federal funding. It passed with 88% support. 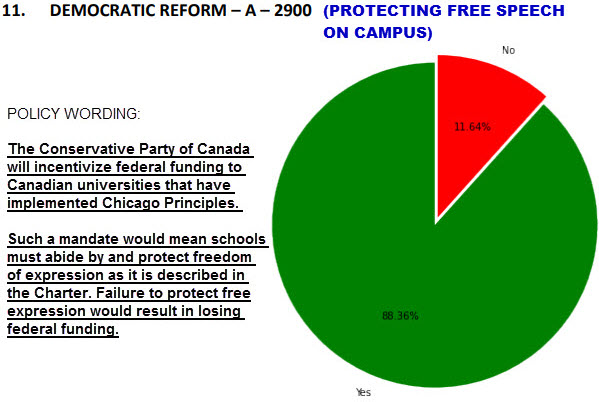 There were a number of other marginal policies that were worth supporting.  On the flip side, the convention package contained numerous very bad policy resolutions designed to knee-cap social conservatives and to block pro-life candidates from ever again being able to run for the party Leadership again.

The graphic below shows that we obtained a 100% voting success rate in the Policy Plenary session: 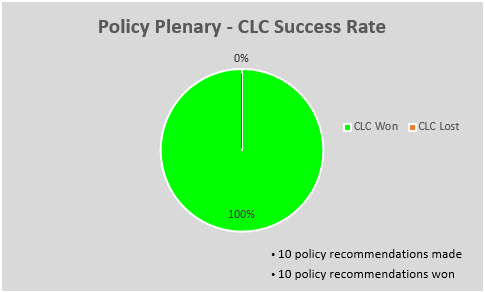 To study each of the 10 policies and their corresponding final vote percentage, click here.

The next graphic shows that we obtained a 100% voting success rate on the Policy Handout Ballot: 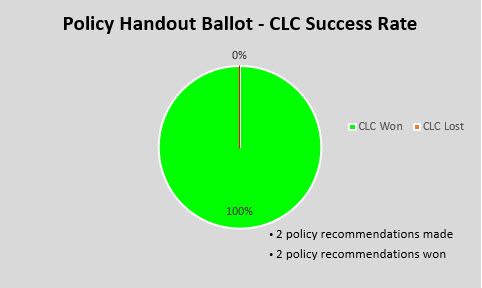 We're so grateful to the Campaign Life supporters / Delegates who made this sweeping victory possible.

In reaction to the party's gerrymandering of the policy process to kill our top prize, the Delete Article # 70 policy, CLC decided to bypass the party's scuttling hands in order to acheive the objective of Delete #70... and then some!

While Delete #70 would have merely eliminated an existing pro-abortion statement, thus leaving the party neutral on the question of abortion legislation, we submitted a Constitutional Amendment that would have gone further, and made the Conservative Party officially pro-life within its constitution by adding the following statement as a fundamental party principle:

2.1.6  A belief in the value and dignity of all human life, from conception to natural death."

Article 16.4 of the CPC constitution enables Delegates to force a vote on any constitutional amendment provided that it has supporting signatures of Delegates from at least 100 different EDAs.  CLC met the requirement by submitting a total of 124 EDA signatures to the Executive Director before the March 11 deadline established by the National Policy Committee.

Subsequently, CLC submitted another amendment that, if passed, would have given members veto power over a decision by the Leader or National Council to disqualify candidates.  Supported by 110 EDA signatures, we submitted the following amendment:

14.4 A plurality of the EDA board or its membership may veto any decision by National Council and/or the leader preventing a candidate from running in a nomination and/or election. A plurality of a board may initiate a nomination challenge if they feel their MP is not representing the riding.

This move was a reaction to O'Toole's expulsion of MP Derek Sloan from the Conservative Party, along with the disqualification of six of our endorsed nomination candidates in just the past three months. We could not tolerate this unjust and unlawful discrimination any longer.

However, by March 12th we still had not received any confirmation from the Executive Director that our amendments would be put to a vote at Convention. So we decided to initiate a lawsuit against the party and ask a judge to force the party to follow its constitution, something we know the courts are likely to do when clear evidence that the constitution has been violated.

We contacted our legal counsel about beginning to write up an application for judicial review, but unfortunately, it was too short notice and they couldn't do the work before the convention started. They referred us to other lawyers who might have the expertise in this field. Over the next few days we talked to several lawyers. But all of them had the same problem: it was too short notice. Their case loads were too full, and they wouldn't be able to get an application for judicial review in front of a judge before the Convention. Therefore, we were forced to abandon the legal option.

"We wish to address two proposed amendments which were not on the list of the 29 Constitutional Amendments we just debated. We wish to draw everyone's attention to rule 8.4 of the Rules  for Constituitonal and Policy Discusions at the Virtual Convention 2012:  'Motions from the floor will not be permitted unless invited by the Chair'."

Campaign Life Coalition tried its best. We're so grateful to the hundreds of Delegates who provided the supporting signatures for these amendments.  Nonetheless, we feel it was a worthwhile exercize.  It showed the party that we social conservatives will not give up and we will not back down until we are given an equal seat at the table.  The swamp is learning that it will suffer reputational loss whenever it tries to cheat members out of their rights and when it tries to suppress their voices.

The info graphic below shows how CLC supporters nearly swept the votes we cared about during the constitution plenary session, with an 89% success rate: 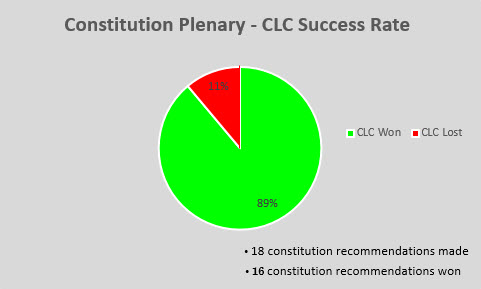 To study each of the 18 amendments and their corresponding final vote percentage, click here.

The next info graphic illustrates our 67% success rate on the constitutional amendment handout ballot: 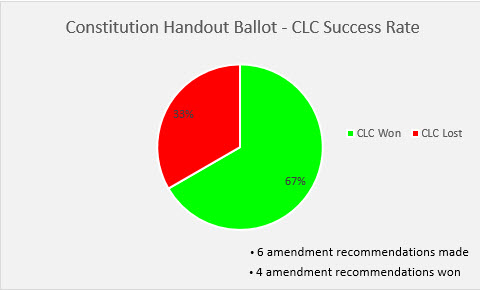 Check out the detailed voting results for each of the six amendments by clicking here.

In spite of the many obstacles thrown at us by the red Tory establishment, we can honestly say that this was a successful Convention in many ways.

The significant increase in the number of National Councillors who respect the party constitution is an enormous win that should pave the way to electing more pro-life MPs in the future. The official party policy declaration has been made a little more pro-life and more forcefully advocating for freedom of speech. We frustrated almost every attempt by progressives to take away the voice of social conservatives.

CLC has plans to build upon these successes and keep the momentum moving forward. You will hear more about this in the near future.

Correction Notice: The original version of our analysis, sent out via email, indicated erroneously that item #25 in the Constitution package was passed. That is the amendment which granted a mechanism to force a vote on policy resolutions from the floor of the Convention with supporting signatures from 100 EDAs. It actually failed because it did not win a double majority. It won a simple majority of delegate votes, but not a majority of provinces.