It’s with sadness I have to say this.

The Toronto Catholic District School Board has stepped into heresy. It can no longer be considered truly Catholic.

On Thursday May 6th, a majority of “Catholic” school trustees voted to proclaim June as Gay Pride Month, and to fly the homosexual Pride flag at every Catholic school in the board, along with TCDSB headquarters.

The votes varied between a 7 to 5 and an 8 to 4 split, depending on point.

Watching the debate, faithful Catholics (and stakeholders of other faiths) couldn’t believe they were witnessing an official arm of the Roman Catholic Church agree to celebrate a sexual sin.

Everybody knows that the Gay Pride flag and ‘Pride Month’ represent ideologies that embody the rejection of Christian doctrine.

The gay Pride flag represents the belief that homosexual relationships are equivalent to biblical marriage between one man and one woman. It represents support for the adoption of children by homosexuals, which places them in permanently and obligatorily fatherless or motherless situations.

The Pride flag represents the belief that sodomy and other homosexual acts are morally acceptable and not sinful. This stands in contradiction to Section 2357 of the Catechism of the Catholic Church.

With the emergence of the transgender phenomenon sweeping society, the LGBT Pride flag now embodies the un-scientific belief that boys can actually be girls ‘trapped’ in the wrong body. And that someone’s desire to amputate healthy breasts and genitalia must be affirmed, on pain of prosecution for refusing to do so.

These ideologies are diametrically opposed to Catholic doctrine and Christian anthropology of the human person. They are evil.

And now, they’re endorsed by an official branch of the Catholic Church which is under the authority and supervision of the Archdiocesan Bishop.

Toronto’s Catholic education system, like the Waterloo Catholic School Board which also voted to celebrate “Gay Pride Month” weeks earlier, will now churn out graduates who despise the Church and her teachings at an even greater rate than before, which was already very high.

Faithful teachers, students and parents will now be ostracized and persecuted, even more aggressively than was already happening. Catholics schools will be turned into environments where faithful Catholics feel unsafe, marginalized and excluded.

Many of the few faithful teachers still in the system may retire early in order to avoid the harassment that they know awaits them and the pressure to bend the knee to the new god of Gay Pride.

May God have mercy on us.

CLC would like to thank Trustee Michael Del Grande and Father Michael Simoes.

They both gave prophetic witness to Catholic moral truth, and to the reality denied by the other side, that embracing Gay Pride will result in persecution of the faithful, division, and serve as an anti-witness to the Gospel.

Watch Father Simoes’ heartfelt delegation to the Trustees, pleading with them to reject the gay Pride flag, by clicking the image below:

Listen to Trustee Del Grande’s powerful speech just prior to the voting where he warned of mortal sin. Click the image below:

In contrast to these defenders of the faith, we suffered the scandal of pro-gay Pride trustees like Markus De Domenico.

He was so belligerent with his opposition to Christian doctrine that he aggressively challenged the priest, his voice dripping with contempt. De Domenico even used the homosexual Pride flag as his background when he spoke at a different point in the Zoom meeting: 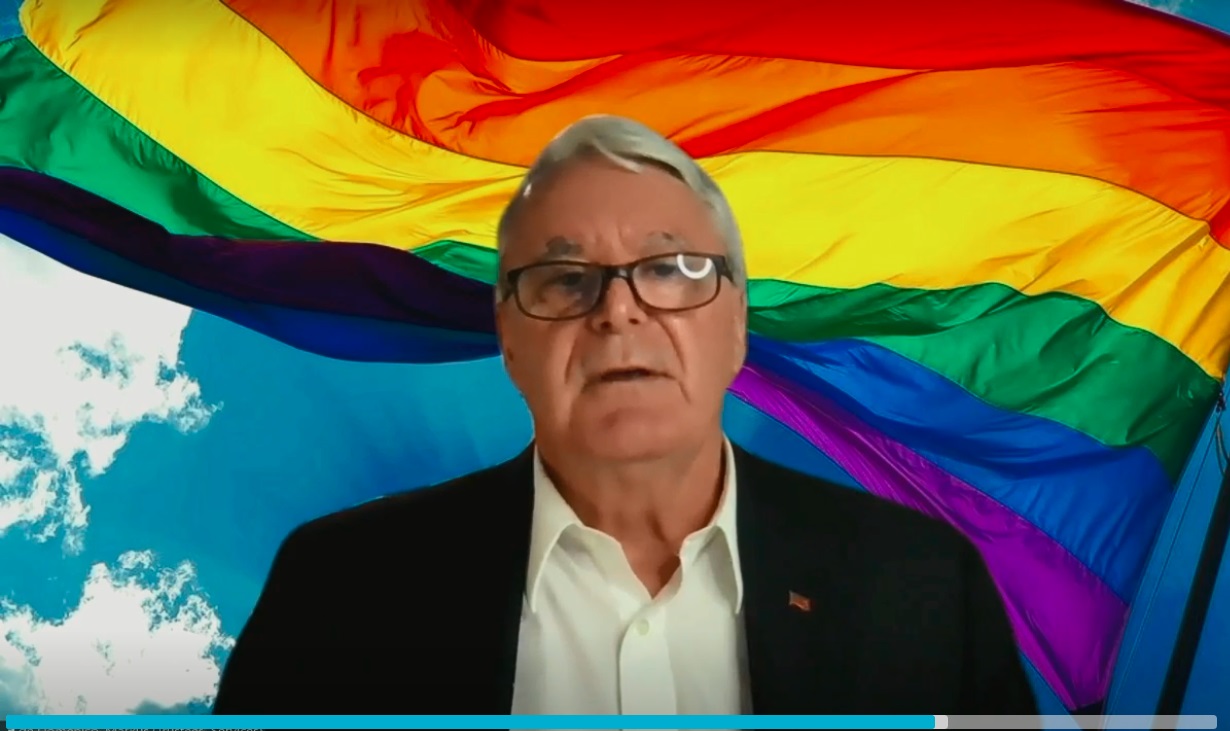 Above: Trustee De Domenico’s video screen during part of the TCDSB Zoom meeting

Is Cardinal Collins Abandoning the Flock?

Toronto’s Cardinal Archbishop issued a statement two days before the vote in which he indicated his preference for the cross of Christ to be used instead of the gay pride flag as the symbol of “inclusion” at Catholic schools. The Cardinal’s reflection was welcome news by Catholic parents and the faithful trustees on the Board.

However, it must be said that His Eminence failed to give direction to the Trustees that was sufficiently clear and sufficiently firm. There was too much ambiguity and wiggle room in his statement, and thus, it failed to prevent this heretical move by the trustees.

Missing was a clear statement that “Catholic schools MUST NOT celebrate gay Pride Month and MUST NOT fly LGBT Pride flags!” No nuance, no room for interpretation. That was absent and thus, it leaves us feeling that he abandoned his sheep to the wolves.

The Cardinal’s statement contained excellent arguments for preferring the cross over the gay flag. We note also our appreciation that the Cardinal permitted Fr. Simoes to speak to the board.

However, Cardinal Collins let the faithful down in his role as shepherd of the flock in his diocese because his statement was half-hearted, ending with a conclusion where he gave the dissident trustees an out by essentially saying they could make their own decisions.

That last paragraph signaled to them that His Eminence would not impose any penalty on the board or individual trustees for voting the wrong way.

“To be clear, locally elected Catholic school trustees will ultimately determine the path forward, but we trust that these insights will be helpful. We pray that we may all reflect on these challenging conversations and do so in a spirit of collaboration, mutual respect and care for one another.” (emphasis added)

The pending heresy was grave enough that Cdl. Collins could easily have warned trustees, either privately or publicly, that they would be denied holy communion under Canon Law 915 if they voted to embrace the sin-laden secular symbol. Canon 915 directs ministers to withhold the sacrament from those who are “obstinately persevering in manifest grave sin”.

There were many other tools available to him, from invoking Section 93 of the Constitution Act which protects Catholics schools in Ontario from any law that adversely affects faith and morals, to threatening to ban the TCDSB from using the name “Catholic”, to simply using the full force of moral suasion which he has barely tapped. He largely chose to stay out of it instead.

What can be done now to stop the spiritual carnage about to ravage 91,000 impressionable young souls (and their parents and siblings) along with thousands of teachers? There are worthy options to consider.

As a political organization dedicated to electing pro-lifers to all levels of government, we will work to elect faithful Catholics in the October 2022 municipal election to replace all eight of the trustees who voted to commit heresy. With a majority of good trustees, this evil policy could be retracted.

Pressure could be brought to bear on Cardinal Collins to support the creation of an alternate, private Catholic school system run by faithful Catholic teachers, nuns and priests. Hopefully His Eminence will soon recognize that to leave impressionable children in the TCDSB system is to risk their eternal damnation.

The legal path laid out by Catholic lawyer, Geoff Cauchi, could be explored, which suggested a class action type lawsuit against the board, seeking remedy against trustees who voted to violate the constitutional mandate of Catholic schools. This path would require at least one, and ideally, multiple Catholic electors in Toronto to step forward as plaintiffs.

If you are a parent, grandparent or a non-Catholic stake holder with children in the TCDSB, you could also try phoning and/or emailing the Principal of your local Catholic school and urging them to resist flying the flag. Perhaps you can help make the school Principal an ally against this heresy, and request an exemption for your local school community? Here’s a link to a list of TCDSB schools.

In the meantime, you could respectfully express your dismay to His Eminence, Cardinal Collins, and ask him to rectify the situation:

Please continue to pray unceasingly that His Eminence will act courageously to protect children from being handed over to LGBT indoctrination.

For life, family and faith,