WCDSB steering children to identify as “non-binary” and “gender fluid”

(Note: This is a version of an email dealing with Catholic issues in the Waterloo Catholic District School Board that was sent to supporters in the area.)

If you're a parent of children in the Catholic board from Grades 4 to 12, please contact your school Principal and teacher, and request that your child be exempted from participating in the “Student Census” that is scheduled to be conducted around November 1st. The date may not be exact, but it’s coming up soon.

If you’re a grandparent of children in the WCDSB, talk to your grown children about pulling your grandkids out of school for this survey.

The woke activists running the WCDSB have planned to have teachers in every Grade 4 through 12 class guide students in completing a “student census” that is filled with radical transgender and homosexual ideology.

The student census is being advertised as an “anti-racism” initiative, but it’s really about the LGBTQ ideological agenda.

The census contains token questions about race. However, that’s clearly just a Trojan Horse to prevent parents from looking more closely at the sexual questions that will be asked of children as young as 9 years old, and which are the real purpose of the “census”.

I’m telling you -- this may be the most dangerous stuff we’ve ever seen infiltrate Catholic schools… and we’ve seen a lot of morally corrosive, anti-Christian propaganda make its way in over the years.

Students in Gr. 7 – 12 will be provided a definition of GENDER IDENTITY to guide them in answering this question, which can have the effect of steering them into questioning their gender and into identifying as something other than their biological sex.

Here’s the definition they’ll be provided:

“Gender identity refers to a person’s internal sense or feeling of being a woman, a man, both, neither or anywhere on the gender spectrum, which may or may not be the same as one’s biological sex. It is different from and does not determine a person’s sexual orientation.”

Depending how students answer certain questions, they’ll be able to choose from a multiple choice list of answers that includes “Another” instead of “Male” or “Female”.

They will be presented with options including:

Below is a screen shot of some of the census questions: 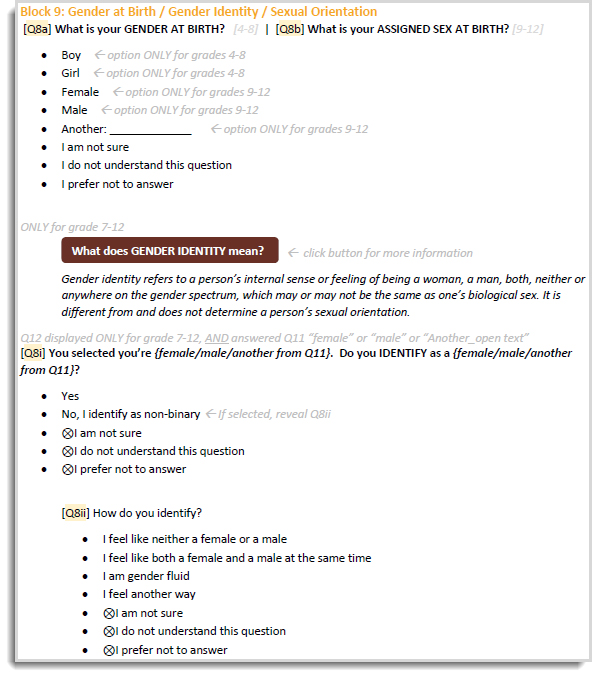 What do you suppose will happen if a child answers that they identify as the opposite sex?

Might the school then arrange to send the child off to a transgenderism-affirming counsellor, behind the parents back, and secretly facilitate "transitioning" to the opposite sex during school?

This abuse has already happened in other school boards, such as the heartbreaking case of BC father, Rob Hoogland, whose daughter was persuaded by a school guidance counsellor to transition to a boy, secretly, without the parents' knowledge.

To read the full student census for yourself, in PDF format, click here.

TAKE ACTION NOW WITH THESE 4 STEPS!

#1. Email your school principal and teacher. Tell them you wish to exempt your children from school on the day of the “student census” and ask which day it will be conducted.

Don’t let your child stay in class that day unless you know they are solid and mature enough in their faith to not succumb to the moral and spiritual confusion this indoctrination program is sure to sow.

This is especially important with younger children. Keep them home. That’s because even if they don’t have to fill out the census themselves, by virtue of being in class, they may end up absorbing all of the teacher’s LGBTQ indoctrination.

The board has said that "Teachers will Administer the census during class time", which could mean the teacher will be talking through the census, to read aloud or explain the questions.

If you have an older child who is strong enough in their faith to understand what this agenda is all about, perhaps they can be a witness to the truth by writing in a protest answer like “Not Catholic teaching”, although it’s unclear if paper surveys will be distributed or if it will only be done online with a device.

If parents can’t keep their children home that day, at the very least, parents should talk with and prepare their kids by explaining that the teacher may present concepts that are opposed to Catholic teaching.

The principal may tell you that it’s too late to exempt your child because the WCDSB set a deadline of Oct 22 to make such requests.

Don’t let that stop you.

Protecting your child from transgender and LGBT brainwashing is too important. Don’t take no for an answer. Demand to know that date so that you can keep your child at home.

#2. Express your dissatisfaction with this anti-Catholic census to the elected trustees of the board. Find their contact info here.

#3. Contact Bishop Douglas Crosby, urging him to take action against this anti-Catholic survey in catholic schools. The Sheppard and protector of Christ’s flock must not allow the board to brainwash children with this wicked, anti-Catholic ideology. His Excellency’s contact info is:

You may also contact the Auxiliary Bishop for the diocese:

#4. The Trustees who allowed this disgraceful survey to be planned and conducted need to be replaced. The next Ontario municipal election will take place in October 2022.

If you or someone you know is willing to run for the office of Catholic school trustee to replace these wolves in sheep’s clothing, please contact us by sending an email to [email protected]lition.com.

We would very much like to talk to you about what we can do to support your successful election.