Today, on June 15th, or possibly tomorrow, a dangerous motion may be voted on, which was introduced by Toronto City Councillor Mike Layton, and seconded by Councillor Robin Buxton Potts.

The motion is trying to censor the tragic reality of abortion throughout Toronto and obstruct efforts to communicate the pro-life message to Torontonians. 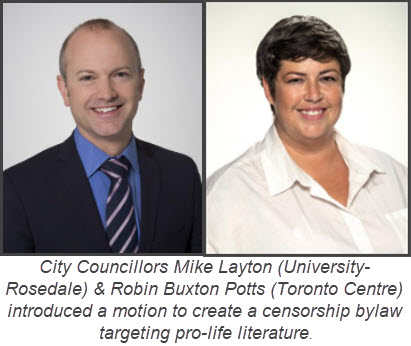 Under Motion MM45.22, if passed, City Council will task the City Solicitor and other staff to draft bylaw “options” for making it illegal to distribute or publicly show any image of an aborted preborn baby, and potentially, even much tamer images than that.

The motion refers to the Councillors’ desire to ban “disturbing graphic images in flyers... distributed to residences and displayed in the public realm”.

The motion holds up the City of London’s bylaw as a model for City staff to study. The London bylaw requires abortion victim photography “to be enclosed in an envelope containing a content warning label”, and imposes fines of up to $5,000 for non-compliance. The City of Toronto clearly seeks to go even further, to ban temporary signs and placards being displayed anywhere in the public square.

Images of preborn human life will be treated like something indecent or toxic under this Layton/Buxton Potts motion.

Arguably, pictures that reveal the humanity of the unborn will be treated with more contempt than the distribution of pornography!

This proposed bylaw will not only restrict the use of abortion victim photography, which exposes the horror of the abortion holocaust, but the term “disturbing graphic imagery” used in the motion is so broad that it could potentially restrict the display or distribution of any images of preborn children in the womb.

In future, depending how it’s interpreted, this bylaw could potentially make it difficult for pro-life activists to display baby ultrasound pictures in the public square!

Motion MM45.22 may end up restricting images like the above throughout Toronto.

It is abundantly clear that, under such a sweeping definition, those City Councillors hope to intimidate the entire pro-life movement and hamstring our work to bring justice to the preborn.

How bizarre is it that there’s literally a motion singling out images of fetuses, when there is no current bill or law restricting abortion in any way whatsoever!

During World War II, it was absolutely vital for the world to see what happened at the hands of the Nazi regime in Hitler’s Germany. In particular, the images of the actual victims of the Holocaust – whether those who were gassed in killing chambers or cremated in people ovens or shot – proved indispensable to establishing the guilt of the Nazis and opening the eyes of the public to the full extent of their crimes against humanity. 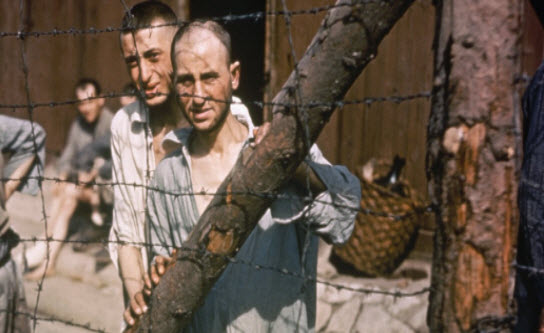 Prisoners at the Buchenwald Concentration Camp

Likewise, the use of abortion victim photography plays a vital role, today, in opening up many people’s eyes to the evil taking place in our country under the banner of so-called “reproductive rights” or “women’s rights”. It is a crime against humanity that must be exposed!

But this crime will remain hidden if we are denied the freedom to show the reality of abortion – or the humanity of the unborn!

That is why this Motion must be soundly defeated – and why I am asking you to reach out to your City Councillors and the Mayor to ask them to stop it.

Motion MM45.22 is not only an unprecedented attack on pro-life speech, but on the free speech rights of all Torontonians. It will result in less freedom for every citizen and more control for the government over what we can and cannot say.

Our right to free expression is captured under our Canadian Constitution as a “fundamental freedom” (section 2(b)). And while we might agree that some expression is offensive or unpleasant to some people, it is vital that this right be maintained in the cause of those vulnerable and voiceless Canadians who are being slaughtered. Over 100,000 preborn babies are murdered by abortion every year in Canada.

Please take a moment to send an Action Alert Email to your local City Councillor using one of the pre-scripted messages we have prepared. It will also be sent to Mayor John Tory. It will only take a minute or two, but it will make a big difference.

MM45.22 must never pass as a bylaw. We must maintain our freedom of pro-life expression in Toronto and throughout Ontario. We must continue to show the humanity of all preborn children.

Thank you kindly for your help and God bless.