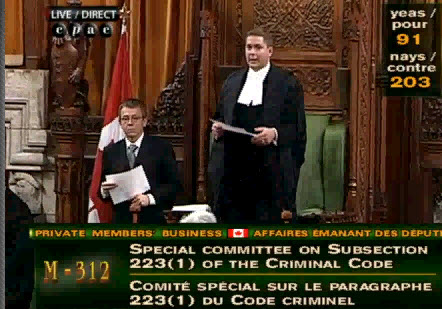 Predictably, but regrettably nonetheless, MP Stephen Woodworth's Motion 312 was defeated 91 in favour to 203 opposed.  Here are a few notable highlights:

The motion never had a fair chance of succeeding given that the number of pro-life MPs who are elected currently constitute a minority. However, this motion was not important because it ever had a realistic chance of passing. It was important for a two-fold reason:

1. It has created a much-needed debate across our nation about the humanity of the unborn child. The value of this debate cannot be understated.

2. It has energized and excited the pro-life movement and encouraged many churches to get more involved.  The challenge now is to translate that energy into political action in getting more pro-life MPs elected until they are the majority.

You can see who voted for and against here.