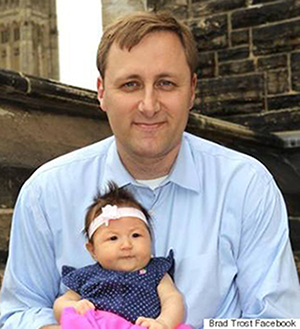 We’re delighted to announce that a federal Conservative Party leadership contender has confirmed he will be a guest speaker on September 21st at the Queen’s Park protest against radical Sex-Ed.

This is exciting news.

MP Brad Trost (Saskatoon — University) is an outspoken pro-family and pro-life advocate who has made news headlines over the past several months by announcing his intention to replace Stephen Harper as Leader of the Conservative Party of Canada.

What’s special about Brad is that he is campaigning on, amongst other things, social conservative issues.

That includes upholding the right to life of preborn children. It also includes support for the natural definition of marriage between a man and a woman.

At the recent federal Conservative Policy Convention, it was Brad Trost who spearheaded efforts to retain the traditional definition of marriage in the party’s policy book.

Brad conducted numerous media interviews at the Convention to articulate why the party should retain a pro-family platform.

Even though Education is a provincial issue, Trost has spoken to the media against Ontario’s radical sex-ed curriculum. Brad is on the side of parents.

Please mark your calendar to attend the protest and hear MP Trost in action, standing up for parental rights! Other exciting guest speakers will be announced over the coming days. Please pledge to attending by clicking the "Going" button on our Facebook Event page for the rally.