The Government of Canada under former Prime Minister Stephen Harper pioneered the Maternal & Child Health aid initiative, which brought countries together to fight against high maternal and infant death rates in many poor countries. The Harper government always refused to include abortion funding as part of the AID program, although the Liberals and NDP often demanded such funding. Now that Justin Trudeau is Prime Minister, the Liberal government will make the killing of preborn children in foreign countries a major priority of foreign “aid”, despite the impossible contradiction of somehow reducing child mortality… by encouraging mothers to kill their preborn children.

The video below is an enlightening panel discussion on Maternal & Child Health, conducted at the United Nations, which totally eviscerates the arguments routinely touted for the inclusion of abortion in Maternal & Child Health initiatives. This U.N. event was co-organized by Campaign Life Coalition, the Vatican’s Holy See mission to the U.N., and Real Women of Canada. 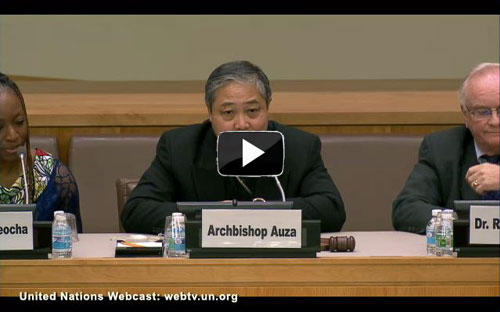