Campaign Life Coalition’s defund abortion campaign exploded beyond the boundaries of Ontario where it first began, making a grand entrance onto the national stage with inaugural defund abortion rallies held in 4 additional provinces.   Between Sep 28 to Oct 5, taxpayers sent the message to their provincial legislators that the practice of killing preborn children via elective abortion is not medically necessary and cannot constitute legitimate health care.

They told their provincial representatives that elective abortion is a lifestyle choice, made for reasons of socio-economic convenience, and therefore, it should not be paid for with tax dollars. The Canada Health Act only requires "medically necessary" procedures to be funded by the provinces, but it does not say that abortion is medically necessary.

Taxpayers in Alberta, Manitoba, Ontario and Nova Scotia held rallies simultaneously on Thursday October 3rd, while Newfoundland & Labrador had its rally 5 days earlier on September 28th.  Two more provinces will conduct rallies in the spring - BC and Quebec. In the spring, Manitoba will host a follow-up rally as well.

The campaign received a lot of media attention across the country. At least 38 news reports were published including TV, radio and newspaper.   On the social media end, Alissa Golob, CLC's Youth Coordinator, set up a tweet-a-thon that had hundreds of people tweeting all day on October 3 about de-insuring abortion.

The defund campaign will continue throughout the year with pamphleting blitzes, petitions and MPP lobbying. We will see the day when taxpayers are no longer forced to pay for the killing of children with their hard-earned money.

Surely, these unions must have dues-paying members who disagree with abortion. Wouldn’t they be outraged to learn that their union spent their hard-earned money to advocate for abortion?  The purpose of a union is to negotiate good wages and benefits with employers on behalf of employees, so why exactly is a union advocating for “free abortion on demand”? This sort of activism falls outside the mandate of a union and constitutes a gross abuse of members' dues.  We encourage Manitobans who are members of these unions to publicly censure union bosses over this incident.  We would love to see dues-paying Manitobans mount some kind of public campaign against this outrageous, pro-baby killing activism.

In spite of the union thuggery, Hayward remained in good spirits and was pleased that the defund abortion message will be heard by the province’s MLAs.  CLC’s Manitoba President, Maria Slykerman, plans to do a follow-up rally in the spring.

Unlike the other provinces which held rallies at the legislative building, Ontarians took mini-rallies to the “home” of each Member of Provincial Parliament (MPP).  More than half the MPPs in Ontario were targeted with mini-rallies at their local constituency office.  In 57 out of 106 ridings, local residents demonstrated outside their elected representative’s office, making a strong impression on the MPP, their staff, and the local community.  The full list of rally locations is here.

At most locations, the volunteer Team Leader read a speech to the MPP or a designated staff member. The speech outlined the main arguments for delisting elective abortion from OHIP.  Ralliers also handed out defund abortion pamphlets to passersby and asked them to sign a defund abortion petition.  What several Team Leaders found is that even many people who consider themselves “pro-choice”, disagreed with spending $50 million dollars per year on abortion as a back-up birth control method.  The argument being made to all MPPs is that abortion is a drain on our healthcare system and that the $50 million, could hire over 200 family doctors, or 400 nurses. Alternately, that money could be used to purchase 20 MRI machines every year, or treat an additional 500 autistic children who currently languish on waiting lists up to 4 years.

At most MPP offices, the staff was polite and respectfully listened to the concerns of constituents, even inviting them to use the washroom facilities inside the office.  However, constituents of MPP Donna Cansfield (Etobicoke Centre) and MPP Michael Chan (Markham-Unionville) were rudely met with locked doors and drawn blinds. 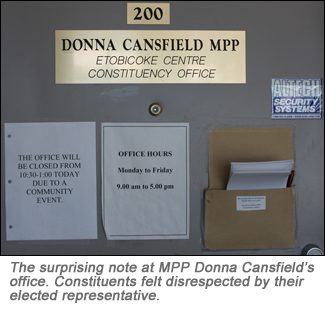 At MPP Donna Cansfield’s office, constituents were shocked to arrive at the office for their scheduled 11am -12noon rally, only to find a piece of paper taped to the door which read, “The office will be closed today from 10:30am – 1:00 due to a community event”.   One of the Team Leaders for this event, Bob Shiley, remarked that this closure was remarkably “convenient” for the MPP but promised that a face-to-face meeting will be arranged to ensure the MPP cannot escape the concerns of her constituents.

Concerned taxpayers at MPP Michael Chan’s office in the Markham-Unionville riding were rudely treated to a locked door, drawn blinds and 2 police cruisers called to the event. So much for listening to the voice of the people who elected you, Mr. Chan!

Most of the mini-rallies took place Thursday October 3, but a few were scheduled for Friday October 4 and Saturday October 5th.

Another CLC spokesperson, Jack Fonseca, was interviewed on Newstalk 1010's Jerry Agar radio program which covers the GTA and beyond. Listen to that interview on the right.

The significant media coverage in Ontario will help wake up the sleeping populace to the fact that abortion is paid for with their tax dollars. The increased awareness will help us grow the defund movement across the province so that one day soon, rallies can be conducted at every MPP’s office.

Highlights, photos and media coverage from the Ontario mini-rallies are below. More locations and photos will follow as Team Leaders turn in reports to CLC.

Successful", "Powerful", "Effective".  These were the words used by our Team Leader, Adriana Reasner, to  describe the rally which took place at the office of pro-abortion MPP, Jagmeet Singh. She reported that 23 enthusiastic participants, including many new faces, were energized about the issue.

Adriana said, "Our MPP Jagmeet Singh was not able to attend but a representative from his office did step out and listen to the prepared message."

She also obtained many signatures on CLC's defund abortion petition, a copy of which will be given to Mr. Singh along with a transcript of the speech and a photo of the group that gathered.

in her 30’s, initially started shouting at the rally participants somewhat angrily, that their opposition to abortion funding is misguided. She argued that instead, they should focus on promoting birth control as a means of lowering abortion numbers.  The Team Leader started a respectful dialogue with her, explaining why the contraceptive mentality is in fact the primary cause of Canada’s high abortion rates. He explained that the true solution is to teach children that sex belongs in a loving, lifelong marriage and is part and parcel of bringing children into the world. After a few minutes, the woman changed her mind and said she agreed with Fonseca.  In the end, she also signed the defund abortion petition!

The Waterloo Region Record newspaper wrote a good-sized article about the rally, but carefully left out all the persuasive facts and arguments that were made by the ralliers. It did not make any mention of the dollar amount spent on abortions by OHIP, nor what that money could buy if used on legitimate health care needs. It failed to mention the assertion by participants that abortion is used today for reasons of socio-economic convenience and is not medically necessary.  One would almost think that the Record’s newspapers editors were trying to protect the abortion industry from criticism…

Moving Forward - the next steps

The next steps in moving our taxpayer defense initiative ahead involves 3 main strategies that will be conducted throughout the next 12 months:

This involves targeting a residential neighbourhood near the office of your elected provincial representative and having a team of volunteers spend 2 hours on a Saturday delivering hundreds or thousands of pamphlets to homes in the area.

This pamphleting blitz reaches outside of the pro-life community to target voters who are likely not pro-life. It aims to wake them up to the economic drain (and human cost) of taxpayer-funded abortion. Owing to the fact that the blitz occurs near the MPP's office, it's almost certain that it will attract the notice of the MPP, which is always a good thing.

The pamphlet is specially-designed to appeal to the general public.  It is eye-catching and lays out a strong case that the tax dollars spent on elective abortion represents an opportunity cost for genuine health care needs. View the Ontario version by clicking the image on the left.

CLC has designed paper and online petitions for each province. We will keep the petitions going throughout the year. When a sufficiently large quantity is amassed in each provincial riding or electoral district, CLC will arrange to have the petitions presented to the MPP, MLA, MNA or MHA by local constituents.

Study the talking points on defunding elective abortion. Familiarize yourself with the facts relevant to your province or community. Then make an appointment with your provincial representative with the goal of persuading them to join our effort of delisting abortion. Please send us a report of your meeting afterwards, for our records to [email protected].

With the help of thousands of taxpayers across Canada, in each provincial jurisdiction, we will achieve the goal of ending forced taxpayer funding of abortion.