Heading Off the Pro-Abort Advance in the Maritimes

It was a whirlwind tour. Last week, I spent two short days connecting with pro-life champions Down East, meeting in front of the Nova Scotia and New Brunswick Legislatures, and delivering vital, life-promoting petitions. We braved the biting Maritime winds and freezing temperatures to be a voice for the voiceless – to speak out and stand up for the unborn.

Last Thursday, I flew from Toronto to Halifax to meet with Ruth Robert, president of Campaign Life Nova Scotia, along with several of her core members. We demonstrated in front of the Legislature calling on the Liberal government of Premier Stephen McNeil to resist growing pressure from the New Democrats to impose pro-abortion “bubble zones” across the province. This totalitarian proposal, which the NDP has vowed to bring forward in the new year, will make it illegal for citizens to express their pro-life views, offer pro-life counsel, or to even pray within large city block-sized zones surrounding abortion facilities. This is not only an attack on our fundamental, constitutional freedoms, but it is an attack on the freedom of abortion-minded women to access life-affirming options and information.

Ruth and I presented our petition – with 2,408 signatures – at the Liberal caucus office. This petition calls on the Minister of Justice, Mark Furey, and the Minister of Health, Randy Delorey, to reject “bubble zones” in Nova Scotia. We pray that God will bless our efforts and move the hearts of these elected representatives to listen to the thousands of voices of life and reason! (If you have not already signed our petition, we are still accepting new signatures. Please sign and share with your friends here: https://www.campaignlifecoalition.com/petition/id/30).

On Friday, I took a quick flight from Halifax to Fredericton to meet with some members of New Brunswick Right to Life, including past president Peter Ryan. We held a demonstration in front of the Legislature, after which we travelled to the site of Clinic 554 to hold a brief protest there. The purpose of this is to encourage the Progressive Conservative government of Premier Blaine Higgs to remain unwavering in its stated opposition to provide bail-out money to Clinic 554, New Brunswick’s only private, for-profit abortuary. Pro-abort activists, along with various left-wing federal politicians, have been putting pressure on the Higgs government to fund the financially unstable killing business, which announced that it will be closing at the end of the year. Apparently, it has proven unprofitable to murder preborn babies in New Brunswick – thank God! 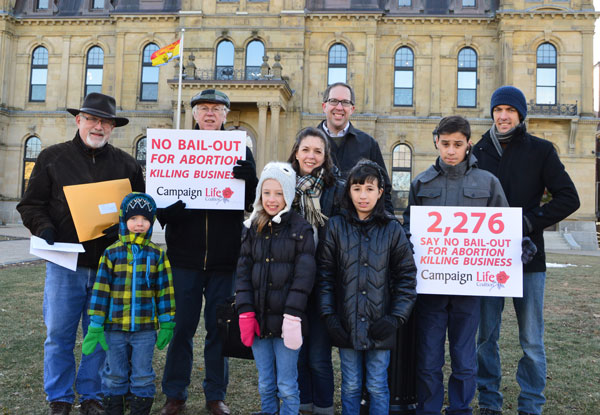 We delivered copies of our petition of encouragement – with 2,276 signatures – to Legislature staff. One copy was directed to the Premier himself, another copy to the Minister of Finance, Ernie Steeves, and a third to the Minister of Health, Hugh Flemming. (If you have not yet signed this petition, you can do so here: https://www.campaignlifecoalition.com/petition/id/31). We are hoping this petition will help bolster the resolve of the Conservative government to not cave in to the demands of the pro-aborts, federal left-wing bullies, and their noisy media allies.

Unfortunately, the media is all but sold-out to the pro-aborts. The narrative they have created in New Brunswick is highly deceptive and manipulative. As I was talking with my taxi driver in Fredericton, he told me what he had heard about Clinic 554 in the news. He was convinced that the abortuary is a benevolent, non-profit medical clinic. He had no idea that they were a for-profit business. He also had no idea that there were any other options or resources available for the women of New Brunswick who find themselves in a crisis pregnancy situation. He evidently had no clue that there is a pro-life pregnancy centre right next door to the abortuary. He honestly thought – based on media lies – that the government was being unfair to deny funding to Clinic 554. I did my best to set him straight and recommended he check out the movie “Unplanned” for the real story on what goes on inside abortion businesses. He said he had never heard of the movie before, but he promised to check it out.

After my afternoon in Fredericton, I flew back to Toronto and headed home for a good night’s sleep. It was a fast and exhausting two-day tour, but well worthwhile. I believe all of our efforts are important as we stand up for the unborn – whether we join a rally, sign a petition, talk with a stranger, write a politician, or simply pray for an end to abortion. I believe God uses every little word, deed, and prayer to touch hearts and minds for life, “for it is God who works in you both to will and to do for His good pleasure.” (Philippians 2:13).

I sincerely wish to thank you for your support, which helped make this critical trip possible. Thank you for helping me speak out for the unborn and be your pro-life voice in the Maritimes last week.

P.S. We recorded some Facebook Live videos while we were in Halifax and Fredericton. You can check them out on our CLC Facebook page here: